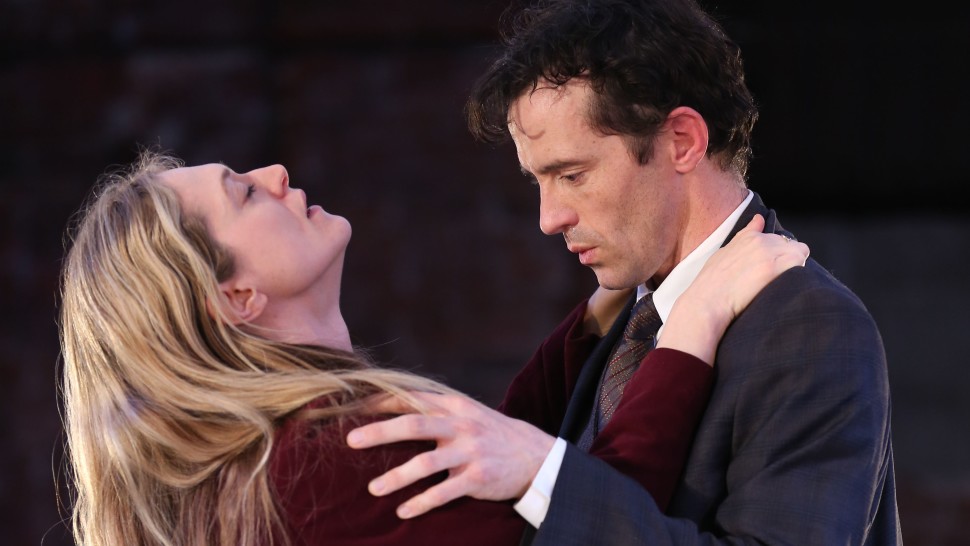 Marin Ireland and Nathan Darrow Sizzle in Summer and Smoke

Marin Ireland and Nathan Darrow Sizzle in Summer and Smoke 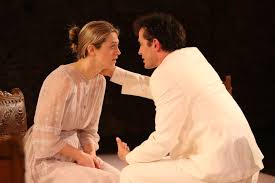 “You’ll be surprised how infinitely merciful they [these tablets] are. The prescription number is 96814. I think of it as the telephone number of God!” 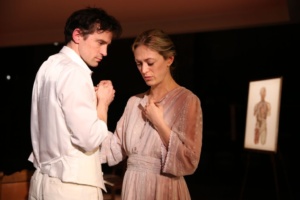 Marin Ireland is such an exquisite actress and she is luminescent in the paired-down revival of Tennessee Williams’ Summer and Smoke at Classic Stage Company. Director Jack Cummings III has stripped away the set, per say. 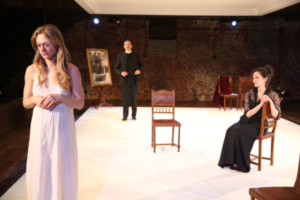 Set in Mississippi at the turn of the century, we meet the highly-strung, unmarried minister’s daughter, Alma Winemiller (Marin Ireland), who is madly in love with the wild, undisciplined young doctor who grew up next door, John Buchanan Jr. (Nathan Darrow). There is a sexual chemistry between the two, but also a spiritual connection that they both fight against and towards. Alma identifies with the Gothic cathedral “reaching up to something beyond attainment” and her name, which means “soul” in Spanish. Buchanan defies her, saying there is no soul. As Alma yearns, Buchanan starts a torrid affair with the hot-blooded Mexican Rosa (Elena Hurst) whose father owns the casino. After losing a lot of money at the casino, Buchanan becomes engaged to Rosa. Alma takes action and calls his father Dr. John Buchanan Sr. (Phillip Clark) who is none too pleased. When he objects, Rosa’s papa (Gerardo Rodriguez) shoots him. By the play’s end, however, Buchanan and Alma have traded places. Alma gets suffocated by smoke from something on fire inside her, and Buchanan becomes engaged to a younger version (a sweet Hannah Elless). It is only through the pain medication he gives her that she finds relief. In the end, Alma follows a young traveling salesman to the Moon Lake Casino where she had resisted Buchanan’s attempt to seduce her the summer before.

There have been many versions of this play which at first were not a hit. The 1952 revival starring Geraldine Page and directed by Jose Quintero at the brand-new Circle in the Square, and the 1961 film version starring Page and Laurence Harvey, which earned Page an Academy Award nomination. There is also a revision of this play entitled The Eccentricities of a Nightingale. 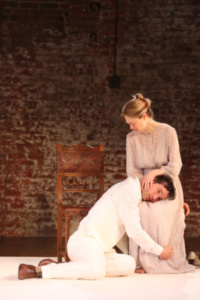 Ireland’s performance is so layered and incandescent as she pines for the man that is always just beyond her reach. Gotham’s Nathan Darrow goes toe-to-toe with Ireland and when they are on stage the play is a fight for the soul with the tables turning slowly. Each fight against melodrama and it is bewitching.

Cummings’ direction deconstructs the piece and it doesn’t always work. Michael John LaChiusa’s music seems out of the 50’s, Rosa’s seems Spanish, not Mexican, the set by Dane Laffrey is almost non-existent, and the costumes are in the correct time period. It almost seems that this play doesn’t know where it takes place.

“Life is such a mysteriously complicated thing that no one should really presume to judge and condemn the behavior of anyone else.”

Summer and Smoke examines how when we judge, we just might end up there ourselves. Ireland and Darrow make this a revival worth seeing.

Summer and Smoke is a co-production between CSC and the Transport Group: 136 East 13th St. until May 20th.

Suzanna BowlingJanuary 24, 2023
Read More
Scroll for more
Tap
Unexpected Joy Has a Multi-Talented Cast and a Script That Needs to Connect Sooner
Girl Be Heard Brings Indivisible: Liberty and Justice for Who? To Life