Marisa Tomei is a Force of Nature In The Rose Tattoo 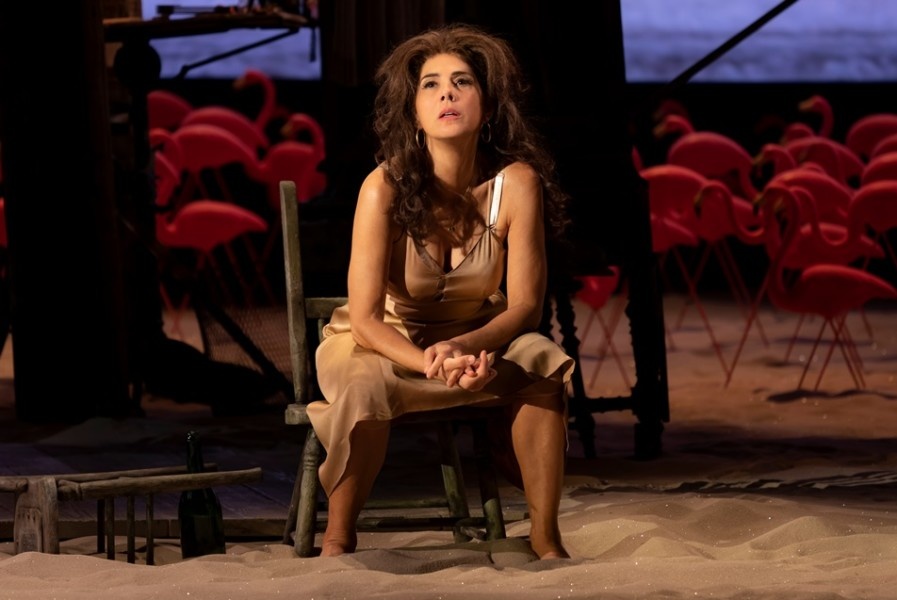 Marisa Tomei is a Force of Nature In The Rose Tattoo

Tennessee Williams’ The Rose Tattoo won the Tony Award for Best Play in 1951. This play however is best known for its 1955 film adaptation starring Anna Magnani who won the Oscar for her portrayal of the earthy Serafina Delle Rose. Williams created Serafina with Magnani in mind. Now the role, has been brought back to life by the Oscar winning and nominated the fabulous Marisa Tomei.

Under Trip Cullman’s direction The Rose Tattoo is being played for laughs. If I hadn’t known this was a Tennessee Williams piece, I would have never guessed its playwright. I also would have never guessed where it was set had it not been for the playbill. The set by Mark Wendland has an absurd amount of plastic pink flamingoes filling 1/3 of the stage. Serafina’s house is part outside and part inside, so when children run in disarray, or people come in and out, it is hard to figure out the configuration. What does work is the candles and alter to the Virgin Mary, which show how Serafina defines herself. The costumes by Clint Ramos keep us in the era and Ben Stanton’s lighting is rapturous, but it is Lucy Mackinnon’s projections that tell us the passage of time, the tides and the day and the night of this seaside locale.

New to the piece is the women of the town who act like a Greek Chorus. Their melodic and haunting voices drift in and out with Fitz Patton’s original music accompanied by Jonathan Linden on acoustic guitar. It is a magical part of this revival.

The play tells the story of a Sicilian immigrant Serafina Delle Rose (Tomei), who is madly and passionately in love with her husband. She brags about their sexual prowess and how she has just conceived. On that same day Estelle Hohengarten (a fabulously condescending Tina Benko) arrives at Serafina’s to have a shirt made for her lover. She is full of entitlement and contempt. Serafina also learns of her husbands demise through Assunta (a stable force given by Carolyn Mignini). As Serafina sinks into a massive depression, the women of the town taunt her with the fact her husband had a mistress. With her passion for life and love lost Serafina becomes unhinged locking up her lustful fifteen-year-old daughter Rosa (Ella Rubin). When Rosa develops a crush on the brother of her friend a sailor named Jack (Burke Swanson) Rosa wants him to swear Rosa will not lose her virginity to him. This does not sit well with Rosa.

When two man hungry locals, Bessie (Paige Gilbert) and Flora (Portia) are judged by Serafina, they blurt out the news of Serafina’s husbands long time affair, which sends her spiraling until truck driver Alvaro Mangiacavallo (Emun Elliott) rekindles Serafina’s zest for life. As he does Serafina comes back to life, but not before some comedic, romantic foreplay.

Tomei is delightful as the innocent Serafina, boastful, sexual and blazing with life. As she descends into madness she starts to talk more with her hands, going into bouts of rage. Tomei sensually dances caressing her body as if in a fever of a women who needs to be touched and is starving for affection. She nails the accent so much, it took me some time to understand her completely. In her scenes with the Virgin Mary, we see her struggle with losing her faith, not just in her man but her God. When she gets to spar with Emun Elliott she has met her match. These two have chemistry and the sparks and slapstick, make for a madcap ride.

Cullman has used this piece to show the divide using ethnic stereotypes, bigotry and how in the 50’s a woman life revolved around a man. Serafina and the other women are in black or slips. As Serafina’s life is falling apart so do her clothes. It is a metaphor for wanting to move on and rediscover who she has buried within.

This production could have used some editing and less laughs. On the big screen they compared The Rose Tattoo with Come Back Little Sheba

Having never seen a production of The Rose Tattoo, I was left with mixed feelings. Marisa Tomei, will most certainly be nominated for a Tony, but the production seemed to go more for laughs, instead of heart.