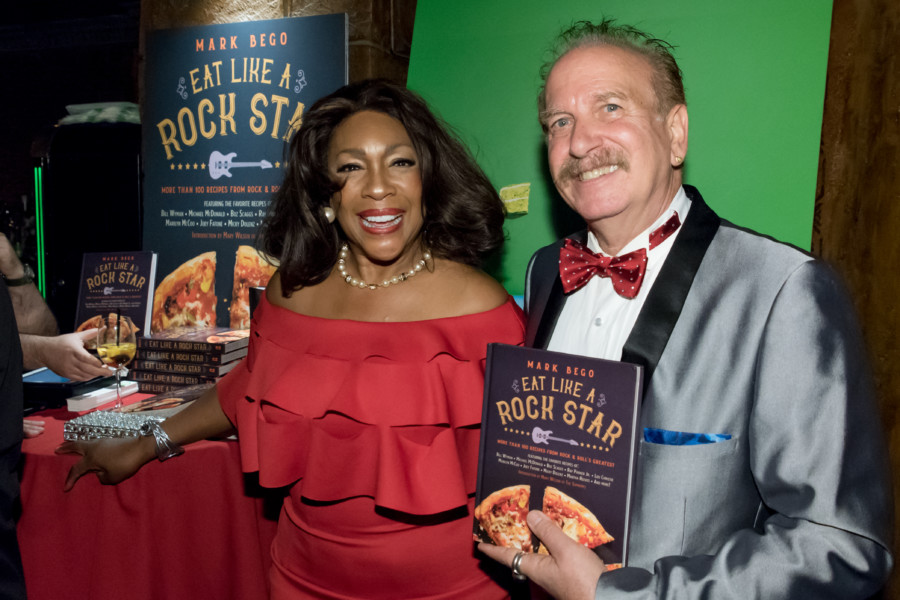 We would all like to live like a rock star, but now you can cook, eat, and drink like one thanks to the ultimate rock & roll cookbook: Eat Like a Rock Star by Mark Bego.  The new paperback version of the best-seller will be released November 24, 2020 by Skyhorse Publishing.

Who knew that Mary Wilson (The Supremes) loves a Caviar Omelet, that Michael McDonald (The Doobie Brothers) loves Pasta with Ham and Parmesan Cheese, that Bill Wyman (The Rolling Stones) makes an amazing Lamb Chops with Endive and Blue Cheese Salad, or that Boz Scaggs cooks Tuscan Grilled Chicken?

New York Times best-selling author Mark Bego, along with ‘Supreme’ singing star Mary Wilson, have gathered beloved recipes from legendary rocker friends and invites the ultimate music fan to put on an apron and join them at the table.  Eat Like a Rock Star gathers together more than a hundred recipes from seven decades of rock & roll, pop, country, R&B, and disco.

According to Bego, “I was working with Mary Wilson on a project, and I asked her if she had a couple ‘Supreme’ recipes to contribute to the magazine, she gave me two, and all of a sudden, I had this idea:  a rock & roll cookbook, that’s what I want to write next!  And, Eat Like a Rock Star was born.”

Adds Wilson, “I loved the idea of this cookbook from the moment Mark mentioned it to me.  He not only gathered recipes from our rock star friends, but he also proves that he can cook as well, and every chapter of this book contains some of his favorite recipes.”

Featuring each rock star’s biography, their favorite recipe, and other fun facts, Eat Like a Rock Star is a must-have for every die-hard rocker-at-heart who loves to cook and eat.

When the hardcover edition of the book was first released, in 2017, it immediately shot to the Top Ten on the Amazon charts as well as becoming a must-have item for rock-music reviewers across the country.  It was so successful that Skyhorse Publishing decided to release it to a wider audience in this new paperback edition of the hardcover classic.

Whether it’s brunch, lunch, dinner, or desert, learn to cook:

With a chapter of head-spinning cocktails, full menu suggestions, as well as author Mark Bego’s own culinary concoctions such as classic French Macarons, Spicy Szechuan Sesame Noodles, and Boozy Banana Cream Pie, look no further for the all-in-one cooking and rock ‘n’ roll companion.  As Martha Reeves says about her recipe for Smoked Turkey Necks & Lima Beans, “Honey, this is real soul food!”

Chef Bego made and created all of the food featured in Eat Like a Rock Star, and took all of the accompanying food photographs himself as well, including the cover pizza photo. From 2018 to 2019 Mark Bego racked up three consecutive Number One books on the Amazon.com best-seller list.  They are:  Supreme Glamour with Mary Wilson (Thames & Hudson Publishers / 2019), Living the Luxe Life with hotel owner Efrem Harkham (Skyhorse Publishing / 2019), and Aretha Franklin:  The Queen of Soul / Tribute Edition (Skyhorse Publishing / 2018).  With his new 2020 paperback edition of Eat Like a Rock Star, Bego continues his winning streak!