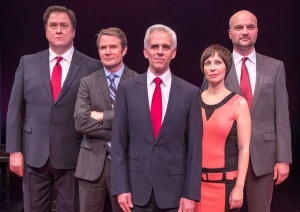 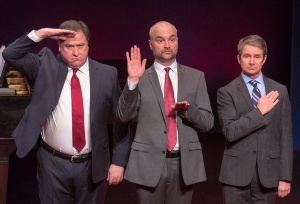 Based on the life of the former Watergate whistleblower known as Deep Throat, or Mark Felt (Neal Mayer, Les MIiserables) we learn the history of 1972. Felt who was a high-ranking FBI official, leaked information to Washington Post reporter Bob Woodword about the 1972 break-in at the Democratic National Committee headquarters in the Watergate building in Washington, D.C. Investigative reporting by Woodward (Peter Benson, The Mystery of Edwin Drood) and Carl Bernstein. Based on Felt’s information, President Richard Nixon’s (Michael McCoy, The Phantom of the Opera) resigned two years later in 1974. Felt, kept quiet about his involvement until 2005, when an ailing Felt confirmed  he was Deep Throat, a name borrowed from a popular pornographic movie of the ‘70s. Deep Throat was portrayed by Hal Holbrook in the 1976 movie “All the President’s Men.”

In this historical, quasi political musical review, the cast portrays twenty-four colorful characters. The lyrics are witty and fresh, especially in “Audrey Felt’ sung by Mark’s wife (Vanessa Lemonides). It truly is a tragedy as to what happened to her and you learn the truth in this piece. Will Erat (Catch Me If You Can) as L. Patrick Gray, wins with his number “Slowly in the Wind.” The best number is “I Am Not a Crook” sung to perfection by Michael McCoy as President Nixon. The music borrows motifs from Baby and Jesus Christ Superstar and is at it’s best when it is jazzy and bluesy. The book is smart and brings you back in time and you realize things really have not changed. The cast is excellent especially Mr. McCoy, though Mr. Mayer touches our soul with “Thanks, Uncle Sam.”
Director Annette Jolles keeps this show going at a clip, but manages to get all it’s points across. If this show was done in the 80’s or 90’s it would have a long satisfying run down at The Village Gate, sadly shows of this nature have run it’s course. Maybe because of the political climate this might stand a chance, but thankfully we have the York Theatre to bring us these little gems.