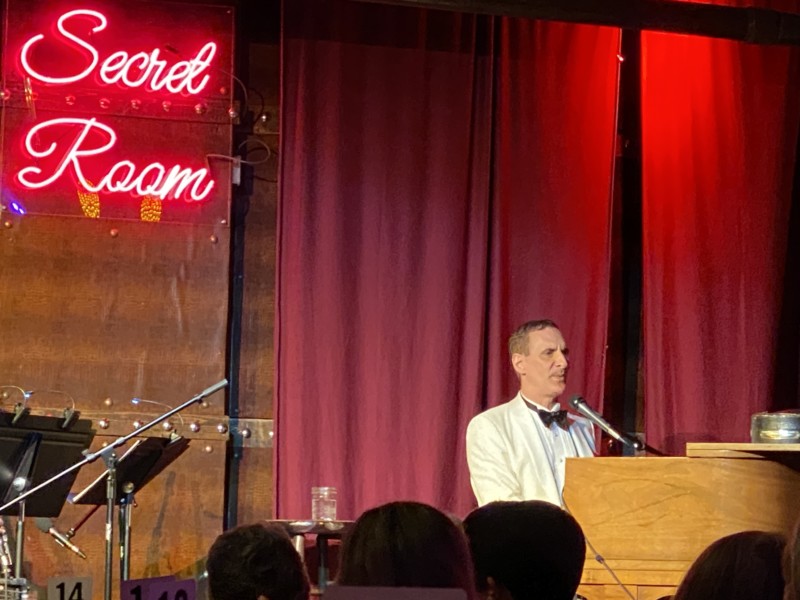 The immensely talented Mark Nadler, brought his 2014 show Runnin’ Wild: Songs and Scandal of the Roaring Twenties, to the Hidden Cabaret. Taking his audience through the most scandalous decade of the 20th Century, Nadler was accompanied by flappers on trumpet (Christian Jaudes) and clarinet (Janelle Reichman), Nadler brought his audience to the era of excess, scandal, and underground nightclubs with colorful stories and songs that bring to life the smoldering torch singers, underground drag queens, Hollywood sex addicts, and one of the great murder trials of all time. The Hidden Cabaret space was the perfect venue for the music of Gershwin, Porter, Weill, and Berlin were all highlighted as well as how to make a perfect, extra-dry gin martini!

Mark brought the evening to a wild beginning with the risqué and very apropo “Let’s Misbehave” and “Let’s Do It” (both by Cole Porter) blended in was “Runnin’ Wild” (A. Harrington Gibbs, Joe Grey & Leo Wood).

Making a perfect, extra-dry gin martini, brought on tales about Libby Holman, a torch singer and murderess, as well as the “It Girl” Clara Bow. “Primitive Man”, “Love For Sale” (both by Cole Porter) and Libby Holman’s “Body and Soul” (John Green/Edward Heyman/Robert Sour/Frank Eyton), told the tale of Holman’s stalker, whom she actually married—and eventually murdered! This dark section also gave us the torchy “Limehouse Nights” (Gershwin/DeSylva/Mills) & “Limehouse Blues” (Philip Braham/Douglas Furber). The Aimee Semple McPherson’s scandal was paired with Nadler’s religious experiences with the his neighbor’s across the street, the Tink family. Debbie Tink and Nadler played doctor as her mother taught him about Christianity. if you listen to the lyrics is “the national date rape anthem,” Cab Calloway’s “Minnie the Moocher” (Irving Mills/Calloway) which started out as “Willie the Weeper. “Say It With Liquor” (Halsey K. Mohr) would definitely be on the “Me Too” list about Bill Crosby.

To give his tale of the twenties a more international feel, Nadler sang a suite of songs from The Threepenny Opera (Weill/Brecht) including “Ballad Of Immoral Earning.”

He ended his decedent tour of the twenties with a manic “Pack Up Your Sins and Go to the Devil” (Berlin).

Nadler’s energy is infectious, even with this dark material. His musicianship is strong, his voice expressive and his acting passionate. It has always been a wonder to me why he is not a Broadway star.

Though this is not the Hidden Cabaret’s first show, it is the show where the cabaret has hit its stride. Check out their pre-St. Patty’s Day show features live music from The Band of Irish Pirates (Robin Flanagan, Dan O’Driscoll, Ann Alford and Lionel Ruland) and stand-up sets from comedians on March 16th at 7pm thanks to Craig Horsley.

Mark, heads to London and Omaha, but to see what he up to next check out his calendar.

Mark Nadler – Runnin’ Wild: Songs and Scandals of the Roaring Twenties at The Hidden Cabaret, closed