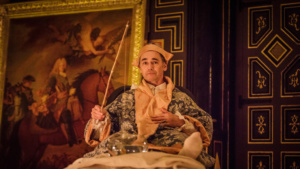 Just give the Tony right now to Mark Rylance, who turns in an exquisite portrayal of a King gone mad in Claire van Kampen’s Farinelli and the King. Though the play by his wife is witty, it fails to capture Farinelli’s soul or the reason behind King Philip V of Spain’s madness. Like a shooting star it shines brightly, but fizzles out. 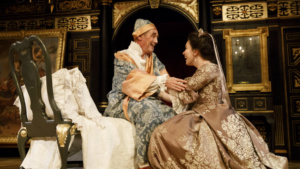 The set by Jonathan Fensom and the lighting by Paul Russell is very reminiscent of Mark Rylance and the Globe’s last productions of Twelfth Night and Richard III. You are transported back to the 18th-century, when the lighting was by candlelight and the audience sat on the stage and in pews. The exquisite costumes by Lorraine Ebdon-Price and hair and wigs by Campbell Young Associates, let’s you know you are in for a magical ride. 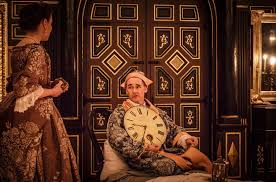 We first see the King (Rylance) talking to his goldfish, who it seems he is also fishing for. Searching for words, Rylance is the epitome of a man who is mentally unstable. He is both vulnerable and powerful, childlike and arrogant. His paranoia makes him violent, while his melancholy makes him despondent. He is a King unable to truly rule, let alone function. His chief minister, Sebastian De La Cuadra (Edward Peel), wants him to abdicate. Philippe’s wife Isabella Farnese (a charming Melody Grove) truly loves him and seeks to find a cure. In hearing the famed castrato singer Farinelli (Iestyn Davies the singing Farinelli and Sam Crane the actual Farinelli), Isabella is convince this is the cure for her husband.  She offers impresario John Rich (Colin Hurley) whatever it will take to bring Farinelli back to Spain. At first he berates her, but when he learns she is royalty, he conceeds. 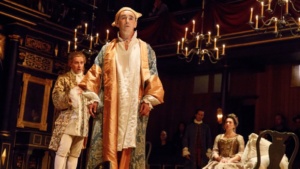 At first Philip is not convinced until Farinelli sings, then as they say, music calms the savaged beast. The King starts to heal, especially when he hears about Farinelli’s forced castration at age 10. He relates his past to the pain inside his consummate songbird, bonding them even future. Philipe moves them all to the forest to contemplate the sounds of the celestial stars. It is there Farinelli falls for Isabella. Though she returns his passion, she loves the King. Farinelli decides to leave, upsetting the King. In the end the King dies and Isabella tries to get Rich, who has now built Covent Gardens to woo Farinelli back, but Farinelli is done with that part of his life. 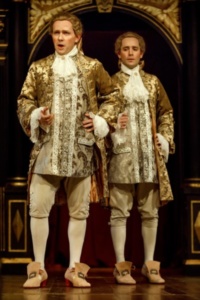 It is in the doubling of the role of Farinelli’s, the play strongest and weakest links are exposed. Iestyn Davies voice is glorious. He transports us and we can see why this King craves his heavenly melodic timber. In each of the nine Handel aria’s we are transported to nirvana. Already a star in the opera world, Davies Broadway debut is something that will be talked about for awhile. However, Sam Cranes Farinelli is so low key, week and non passionate, despite some of the text. He’s nice looking, but blah. Even in the scene where he professes passionate love to Isabella, we do not see his longing. We see hers, but he is a singer and was considered a very passionate diva. I get that we are seeing both sides of this man, but the chasm is too wide. Ms. Grove does show us the layers of Isabella and we believe she loves her husband despite his flaws. But it is Rylance who steals this play with his heartbreaking performance. 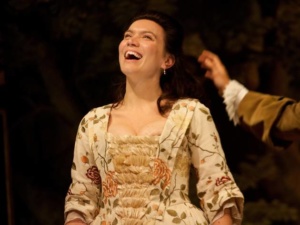 Director John Dove’s direction makes this piece so watchable and so entrancing. His use of the stage and the theatre, makes you feel as if you have been dropped into the 18th century. 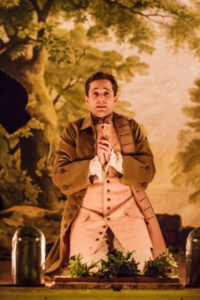 What Ms. van Kampen’s does, is integrate music seamlessly into the piece. Her dialogue is witty and fresh, but I never truely understood Farinelli’s relationship with the King. They spend so little time together on stage. We never get the reason for how the King ended up mad. Was it early onset dementia? Music does calm that state of mind. The Queens real name was Elisabetta not Isabella and since we are dealing with real people why the change of name? Farinelli also stayed with the court long after Philip’s death in 1724, even though it was Elisabetta (Isabella) who was sent away. Farinelli didn’t leave Spain until 1759, when Elisabetta ‘s (Isabella) son Charles kicked him out for not leaving with his mother.

The musicians, under the direction of Robert Howarth on harpsichord, make this an evening of theatre that will leave you peaceful, calm and maybe just a little healed.