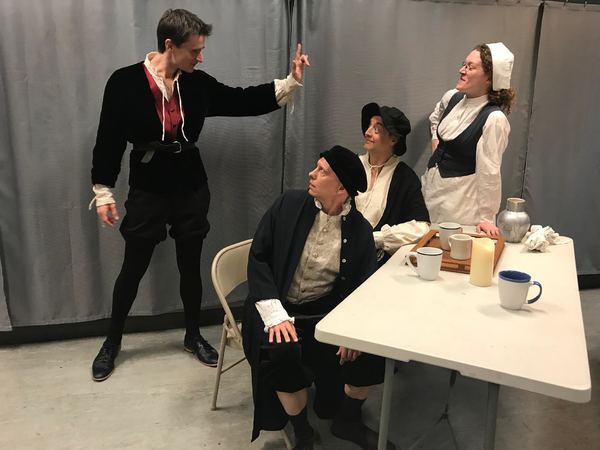 Marlow’s Fate Asks Too Much

Marlow’s Fate Asks Too Much 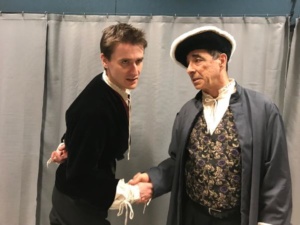 Peter B. Hodges’ Marlow’s Fate, being produced by The Caravan Theatre Company on Theatre Row, asks you to believe that Christopher Marlow wrote William Shakespeare’s cannon. Marlowe who had already wrote his 1587  hit Tamburlaine and the narrative poem Hero and Leander, by the time of his death in Deptford in 1593. Shakespeare, did pay homage to Marlow in As You Like It and was clearly influenced by him, but there is no evidence of them meeting, let alone combining efforts. There is a sect called Marlovians who claim Marlowe’s death was faked and he was the genius behind Shakespeare. Yes, there are similarities between their works, Marlowe’s style, vocabulary and writing style is said to be too different from Shakespeare’s to be compatible with the claims of the Marlovians. Also if this was the case how did they keep so many people silent? Marlow’s Fate was definitely written by a Marlovian. 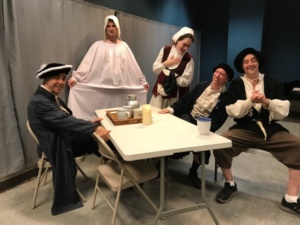 There is much confusion with the cast playing two and three roles. Brady Adair, Tim Dowd, Thomas Grube, Sarah Kiefer and Len Rella, do the best they can with this work which follows Christopher Marlowe (Dowd), a man considered to be the most talented and accomplished playwright and poet of his generation. His death is faked and he is sent out of town. One week later, Shaxper (aka Shakespeare, again Dowd) is recruited to act as stand-in for the disgraced Marlowe, putting his alias on Marlowe’s poem, Venus and Adonis. Five years later, as Shakespeare’s fame grows, Ben Jonson (Rella) is hired to keep him under control.

The second act begins with a Punch and Judy Puppet show with a a title fight between Shakespeare (Grube) and Marlowe (Dowd) as puppets for the English literary crown. This comes out of left field and makes no sense. Finally, Ben Jonson and Michael Drayton (Adair)  join Shaxper (Grube)  to celebrate his 52nd birthday at his daughter’s inn. A lackluster ending, left much to be desired.

There was too much confusion what with Jethro Tull  music playing in-between acts and the Punch and Judy show with puppets such as Care Bears, The Count from Sesame Street and Jack from Nightmare Before Christmas. I was lost in translation as to why much of this play was happening. Also a lot of the acting by the men seemed to border on yelling instead of layering.

I found this production in need of a anchor and better direction by the playwright. Sometimes you need another eye to stage your work.

Marlow’s Fate: Battle of the Bards: THE Christopher Marlowe Festival, May 10th- May 26th in the Studio Theatre on Theatre Row (410 West 42nd Street).