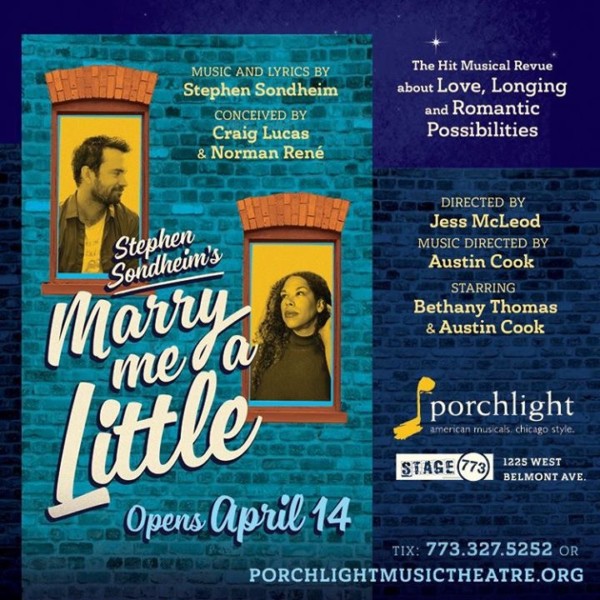 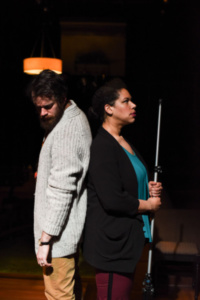 Urban romance can prove to be a tricky field to navigate. While city dwellers are constantly surrounded by copious amounts of people, truly no mater where they go, forming a real and tangible connection can prove utterly fleeting. This is the concept behind Porchlight Theatre’s updated, charismatic, two-actor musical, Marry Me A Little, currently playing at Stage 773. Two singles live in the same New York high-rise building, but never unite until the evening the passionate piano playing of “The Man” proved too much for his upstairs neighbor “The Woman” to handle. Their initial confrontation quickly segued into all aspects of burgeoning romance, to which the audience bares witness. 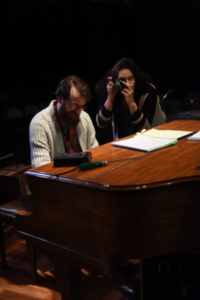 Director Jess McLeod kept this Stephen Sondheim revue’s 70 minute pace quite brisk. Porchlight’s Artistic Director, Michael Weber, shared Sondheim graced this elegant little production with his permission to update the original songbook. Initially staged in 1981, Marry Me A Little has been restructured, adding toe-tapping ditties from Into the Woods, Road Show, Company, A Little Night Music, and Follies, just to name a few. Crafting this charming amalgamation of lesser known, cast-off Sondheim songs, then winningly stringing them together with endearing charm created the structural narrative. I credit much of this to the awesome talents of music director-pianist-actor-musical arranger and Sondheim doppelganger, Austin Cook. A wunderkind of a performer, Cook graced every aspect of this show with his immense talent.  Good thing he isn’t also a set designer or Jeffry Kmiec would be out of a job. Kmiec’s set is a large square strategically placed in the center of the room, the audience watching the action from every angle. The interior is two separate living spaces arranged side-by-side, although for the purpose of the story, they are supposed to be on top of one another. The audience wholeheartedly played along. 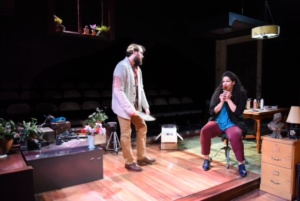 Sung the entire way through, Marry Me A Little’s nubile neighbors are played by the dynamic duo, Austin Cook and Bethany Thomas. Both performers are really solid, capable vocalists, each excelling during their strong and fiery duets as well as individually, during each soaring solo. The songs here told the entire story, serving as the show’s dialog strung together in a 21 song set list which included “Saturday Night,” “The Girls of Summer,” “A Moment With You,” “Rainbow,” “The Best Thing That Ever Has Happened” and “Can That Boy Foxtrot.” Thomas “Foxtrot” proved a show-stopping number, her powerful and breathtaking  vocals “knocked it out of the park” to borrow a line from the neighboring Cubs stadium. I am happy to report both Cook and Thomas really upped their collective games. These two personifying Sondheim’s lyrics as we followed the progression of this new relationship, from initial flirtation, to passion, and then – spoiler alert- the inevitable break-up. The sophisticated charms of the lyrics pontificated throughout both of their performances.

Conceived by Craig Lucas and Norman Rene, Marry Me A Little worked well with its subtle charms. The name Stephen Sondheim should be enough to sell out this show’s limited run, but the true remarkable talents of Bethany Thomas and Austin Cook are the real punctuation to the piece and should be the reason tickets are sold. In a crowded Windy City spring theatrical lineup, Marry Me A Little is a classy little number, well worth your time. This isn’t a show that dazzles with breathtaking costuming or over the top opulence. It sizzles primarily through song. If I may be honest, I felt chemistry lacking between the two leads during their romantic songs, often sealed with forced staged kisses, however during their solos, no one can touch Thomas’ electrifying singing skills. Cook’s piano playing and song rearrangements thoroughly impressed as well.  Porchlight has another classy, grown-up night out, hit on their hands.

Porchlight Music Theatre’s Marry Me A Little is now playing through May 21, 2017 at Stage 773