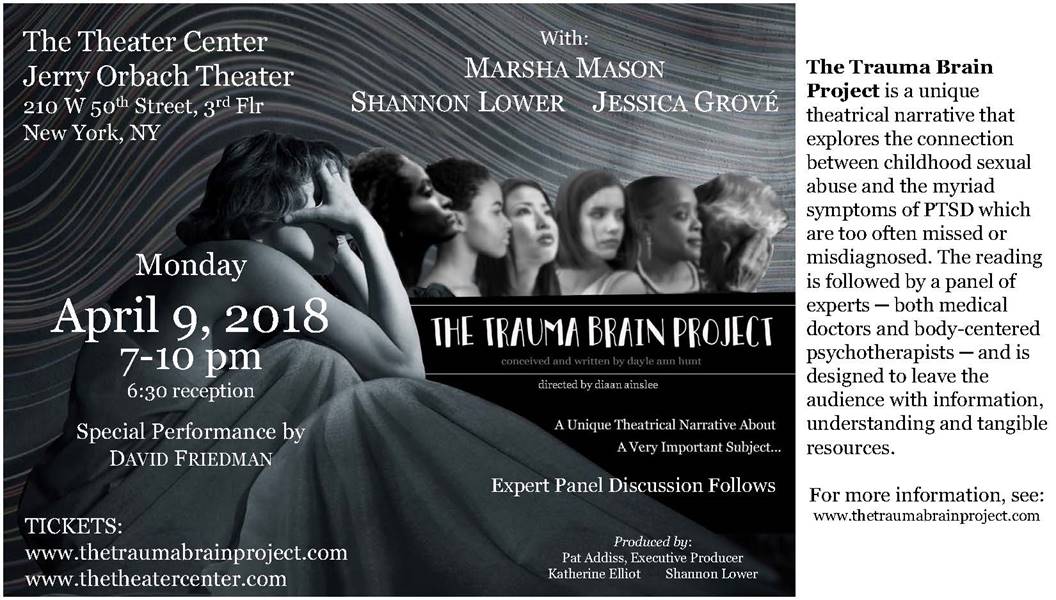 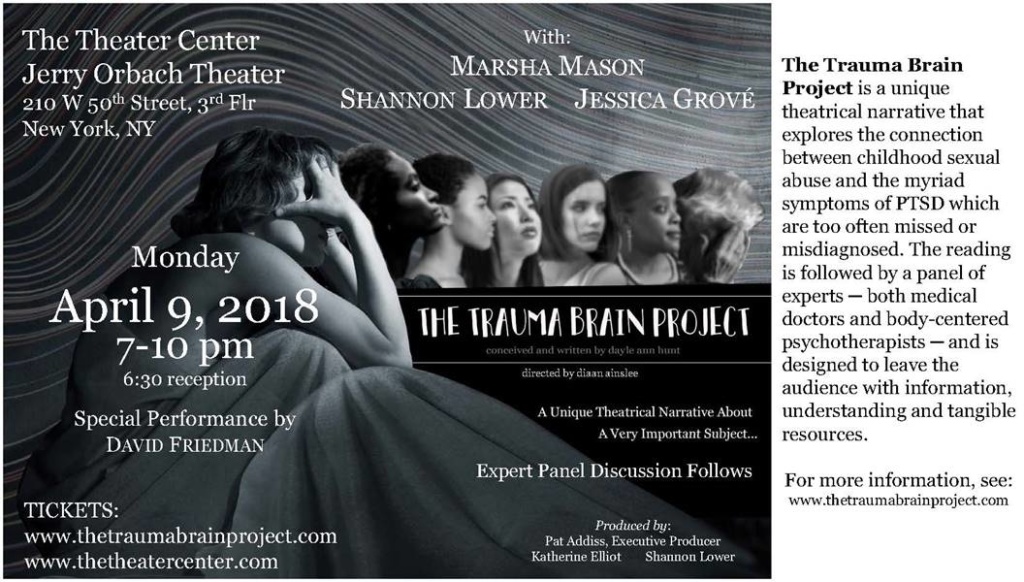 “Up to 50% of patents with intractable seizures being seen in Epilepsy monitoring units are suffering from non-epileptic seizures.
The source of this, for many, is sexual and physical abuse, which can cause lasting effects on the developing brain.” (Patricia A. Gibson, MSSW, DHL, ACSW, Associate Professor, Neurology, Wake Forest Medical School)

The Trauma Brain Project is a unique theatrical narrative that brings together three communities — Theatre, Body-Centered Psychotherapy and Neurology — in a joint effort to raise awareness, break a conspiracy of silence and give voice to the often voiceless women and girls who are dealing with the effects of undiagnosed PTSD, stemming from childhood sexual abuse.

Utilizing three powerful actresses, The Trauma Brain Project portrays one woman’s experience — a decades-long journey through three different stages of life — of childhood seizures, inexplicable physical symptoms, hidden trauma and PTSD; it explores how early trauma rewires the brain and impacts the body in ways that we are only just beginning to understand, and ultimately takes the audience on a journey to healing through Somatic Experiencing therapy as pioneered by Dr. Peter Levine.

The theatrical presentation is followed by discussion with a panel of experts composed of neurologists, body- oriented psychotherapists and other trauma experts, and is designed to leave the audience with information, tangible resources and a heightened awareness of the importance of breaking the silence around the problem of child sexual abuse.

While we know that incidents of sexual assault are underreported and undisclosed, as highlighted by the current #MeToo movement, studies conducted internationally confirm that the problem of child

sexual abuse is much more widespread than previously thought.1 The Trauma Brain Project sheds light on an often unacknowledged result of trauma — its insidious effects on both body and mind. The Adverse Childhood Experiences Study (ACES) provides evidence that traumatic childhood experiences are linked to increased medical conditions throughout a person’s life. While results demonstrated a connection between exposure to childhood trauma and high-risk behaviors (e.g., smoking, unprotected sex), chronic illnesses such as heart disease and cancer, and early death were linked as well.

A 2009 study showed that 7.9% of men (7.4% without outliers) and 19.7% of women (19.2% without outliers) had suffered some form of sexual abuse prior to the age of eighteen. Due to complex individual, cultural, and societal issues such as social stigma, fear, victim blaming, these rates may be an under estimate of the prevalence of child sexual abuse. Source: Pereda, Guilera, Forns and Gomez-Benito (2009) The prevalence of child sexual abuse in community and student samples: a meta-analysis.

Despite this evidence, survivors’ symptoms are too often dismissed — unacknowledged, misunderstood, misdiagnosed. For example, up to 50% of patients with intractable seizures being seen in epilepsy monitoring units are suffering from non- epileptic seizures. The source of this, for many, is sexual and physical abuse, which can cause lasting effects on the developing brain.

While the long-term effects of abuse represent a high cost to individual survivors, the high cost of abuse to society as a whole has created a public health crisis, something else which our panelists address.

The Trauma Brain Project is a powerful and moving experience for the cast, the panel and the audience members alike. The impact of sharing, we have discovered, is both personal and profound, and the learning is reciprocal.

Statistics aside, we have been privileged to learn from our audience members as well that the problem of childhood sexual abuse is far more widespread and hidden than any of us had imagined.

We recognize the need for a broader conversation, for a wider understanding of both the emotional and physical impact of child sexual abuse, and for the knowledge that there are somatic therapies available to treat the symptoms of trauma. Our hope is that The Trauma Brain Project will help to encourage a more expansive dialogue, lead to greater healing, and foster an increased compassion and understanding; that it will convey our belief in the power of somatic therapies to treat both body and mind.