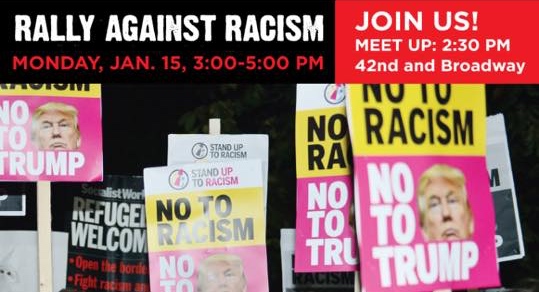 It’s the 89th anniversary of the Civil Rights leader’s birth. The Brooklyn Academy of Music will host speakers, musical performances and art exhibits as part of their 32nd annual celebration.

However others are using this day to speak out. Today at 2:30PM in Times Square (42nd & Broadway) a rally is slated to stand up to President Trump’s racism! According to their facebook page “President Trump’s racism was on display yet again this week with his hateful comments about Haitian and African immigrants. We will not let bigotry divide us, and we will welcome and defend all immigrants! WE ARE AMERICA!”

A poster Rally Against Racism was circulating on social media.

Area politicians, including Councilman Jumaane Williams and Assemb. Rodneyse Bichotte have indicated they’ll attend, as has the Rev. Al Sharpton, who tweeted that he’ll be there too. “See you there!” Williams tweeted Sunday night.

Sharpton is scheduled, along with his National Action Network, to share the stage with Mayor Bill de Blasio and Gov. Andrew Cuomo at a King Day Public Policy Forum in Manhattan.

WriterAugust 10, 2022
Read More
Scroll for more
Tap
In February Look Out For Interference AV In Times Square
APAP And You Are There Part 1