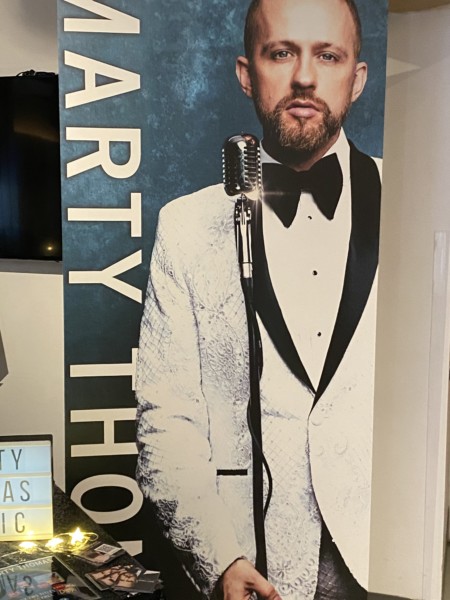 Last week Marty Thomas packed The Green Room 42 with the release of his new CD Slow Dancing With A Boy (Broadway Records). He revealed his trauma of being a gay teenager in a rural, conservative, religious home, where he was not able to have the prom experience he wanted, so he created his own.

Starting off with “Slow Dance” backed by his fierce trio Lisa Ramey, Marissa Rosen, Yvette Rovira, gave way to “Remember Me This Way” and Madonna’s “Crazy For You”. Thomas’s strong tenor was clear and melodic. He brought back the sound of the Bee Gee’s and the voices on Star Search (which he won the kid version in 1992), The Voice and American Idol.

The show was more of his second chance to have a prom and most of the guests dressed to the nine’s. A photographer met you at the door to capture your experience. The Green Room 42 was decked out in balloons, prom decorations, a DJ, and was filled with all the joy, minus the angst of the real thing. A mash up of “Dancing On My Own”/ “All By Myself” and “Someone to Fall Back On”, led to hysterical, yet heartwarming stories of all the dances he felt insecure about.

What Thomas does exquisitely is the arrangements he created with producer and co-arranger Jamey Ray. He proved this with a mash up of “Save The Best For Last”/”Everything I Do”) with Mykal Kilgore.

The unhappiness Mr. Thomas felt at not being able to expresses his true nature and bringing beard dates, has left a mark that has haunted Thomas. The songs on Slow Dancing With a Boy, reflect those memories as he journey’s to his authentic self. “Dreamlover” with Jamey Ray and Rachel Potter was a highlight, that spoke to this.

A rousing “Show Me Heaven” backed by all the singers named plus Alex Ortega, Jenifer Thigpen, Gabe Violett and Sarah Whittmore.

Describing the cd and the process of creation, Thomas bared his soul sharing stories about belonging.

Thomas finished with West Side Story‘s “Somewhere”, but he truly has found his and this show and CD proves it.

After the release party the prom continued with dancing and song, making this a magical night.

At the after party Rachel Potter With Lisa Ramey, Marissa Rosen, Yvette Rovira captivated the night.