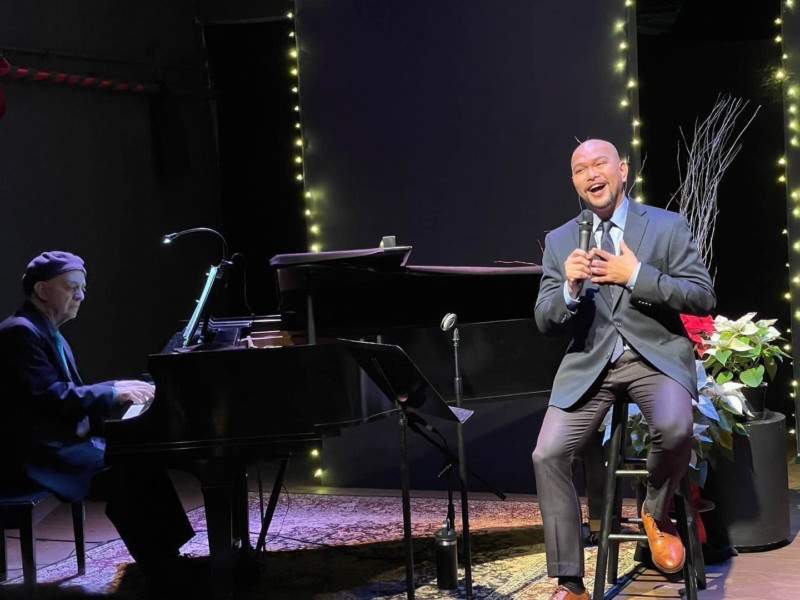 After a sold-out performance on December 18th at Urban Stages Marvin Gayatgay returns to their stage on Saturday, February 12th at 7PM. Tickets can be purchased at Urbanstages.org.

Marvin debuted his solo show with a collection of standards, Broadway tunes and some Philippine language favorites. “

His rich lush voice has a musicality to it that is truly a find,” writes Time Square Chronicles,

“This man has a charm about him.” Broadway World calls him “an affable man with a pleasant presence – so pleasant that it is impossible not to like him.” His vocal stylings ranges from Broadway’s This Is the Moment to a Tom Jones infused It’s Not Unusual and then to a lovely Filipino love ballad Gaano ko ikaw kamahal (How Much Do I Love You), where even if you don’t know his native tongue you feel what the words mean.

Mr. Gayatgay has performed throughout the world with world-renowned Philippines Madrigal Singers where he was the bass soloist. He has soloed with them in North and South America, Europe and Asia and in 2007 the group achieved a rare second victory at the 2007 European Grand Prix for Choral Singing in Arezzo, Italy. Currently, he is a

vocalist and instructor with both The St. Paul Inspirit Ensemble in Manhattan and as choirmaster of The Voice of Friendship Singers

The show is directed by Vincent Scott and produced by Craig Horsley with John DiPinto accompanying Mr. Gayatgay on the piano. Mr. Horsley saw a Youtube video of Mr. Gayatgay singing Impossible Dream at an award ceremony and searched him out to create this show for him. “I saw the video of Marvin singing and knew he deserved to be in a venue that allows him to shine. I knew my instincts were right when I saw the reaction of the audience at the December show.”

Vincent Scott (Director) most recently directed the world premiere of Lori Brown Mirabal’s Charmed Life from Soul Singing to Opera Star at Urban Stages. Previously he directed the premieres of What Happen to The Dollar and Good Corporate Citizen both by Sam Garber, and Accentuate the Positive (The Johnny Mercer Story) by Calvin Ramsey. He has assistant directed Death Of A Driver by Will Snider (directed by Kim T. Sharp) and Bars and Measures by Idris Goodman (directed by Kristian Seemel). Based in New York he has directed in Los Angeles, Chicago, London and Dublin.

John DiPinto is a musician, singer, songwriter, actor, musical director and arranger. He has worked extensively in the NY theatre and cabaret scenes. In 2011 he was musical director for I’m Getting My Act Together And Taking it On The Road as part of the York Theatre’s’ MUFTI series. He was also musical director and arranger for NYMF 2010’s production of Trav’lin’, a new musical featuring the songs of composer J.C. Johnson. He has conducted on Broadway (Footloose) and Off-Broadway (Langston In Harlem, Altar Boyz). He and his singing partner Mary Foster Conklin have performed their shows Maybe It’s Because Of Love and Down For Double at various cabaret venues, to rave reviews.

Craig Horsley is a Board Member of Urban Stages and wrote and produced a well received cabaret show in February 2020 called “Love and Other Feelings” at the Hidden Cabaret. In December, 2021, in addition to bringing Marvin to Urban Stages he wrote and produced another show there, “Four!”, starring Kea Chan, Mollie Downes, Jenn Noble and Sarah Parnicky. Mr. Horsley realizes that there is a lot of talent in New York which because of the past two years has not had the chance to be on a stage. He sees the stage of the Urban Stages theater to be the perfect venue to spotlight those voices where they can once again feel the excitement of a live audience.

Urban Stages is an award-winning, not-for-profit, Off-Broadway Theatre Company founded in 1984 by current Artistic Director Frances Hill. “We have developed into a bigger and more diverse organization since our beginnings. Urban Stages now reaches thousands of New Yorkers every year in over 100 neighborhoods while also offering an Off-Broadway experience like no other at our theater (259 West 30th Street, NYC).”

Genevieve Rafter KeddyMay 10, 2022
Read More
Scroll for more
Tap
After a Year John Lloyd Young Finally Gets His Six Nights at Feinstein’s/54 Below and Adds a Livestream Event
A Broadway Valentine