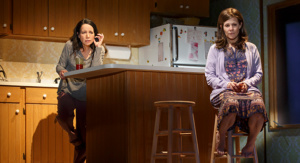 With so many children taking care of their parents, the question becomes who takes care of the caretakers, when they get terminally ill? Scott McPherson’s Marvin’s Room takes on that question in Roundabout’s well-acted revival at the American Airlines Theatre, directed by Anne Kauffman; the play itself seems outdated and tame. 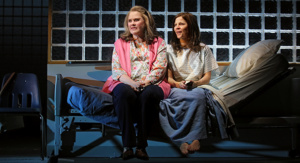 We follow 40-ish Bessie (the subtly delicate Lili Taylor) as she gets diagnosed with leukemia, by the weirdly incompetent Dr. Wally (Triney Sandoval). For the past 20 years of her life Bessie has been devoted to taking care of her dying father Marvin. “He’s doing it real slow so I don’t miss anything,” and the sad fact is she would probably miss it if he did speed it up. 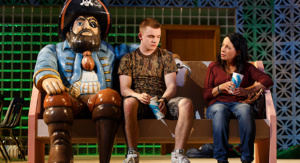 Bessie has another burden in the form of her senile Aunt Ruth (Celia Weston), who suffered from three collapsed vertebrae until she had electrical implants put in to relieve the pain. Ruth is more focused on the sitcom she watches than in helping out with the simplest of tasks. She constantly opens the garage door, as well, which is an annoyance to Bessie.

Bessie has been forced to call her sister Lee (Janeane Garofalo), who she has not seen for decades. Lee abandoned the family and went on to have two sons (Jack DiFalco and Luca Padovan) and a life. Bessie is hoping one of them will be a bone-marrow match so she can keep on taking care of the family. Lee steps up to the plate even though her usual M.O is to run as far away as possible from those in need, including her sons.

From there on in Marvin’s Room becomes a study of caretaking, loss, guardianship, selflessness, neglect and family.

The acting is uniformly good, but if you have seen the film version with the brilliant Meryl Streep as Lee, Diane Keaton as Bessie, a terrific Leonardo DiCaprio as Hank, Gwen Verdon as Bessie, Hume Cronyn as Marvin and Robert De Niro as Dr. Wally, it is hard to not compare. This is not the tearjerker the film was. As a matter of fact the show barely manages to elicit much emotion at all.

Anne Kauffman has under-directed this piece. Though there are honest and real performances, this production is just dull. When Scott McPherson’s wrote the play, people were dying daily from A.I.D.S and there was nobody to take care of the dying. Now the play would be more about the medical issues and insurance. The ending leaves us in a quandary over these dilemmas and questions. Some things never change.