Suzanna Bowling
Tracy Letts’ (August: Osage County) new play, Mary Page Marlowe reminds me a lot of “The Diary of a Mad House Wife.” We follow Mary Page, played by six different actresses, during ten stages of her life.
We first met Mary Page (Susan Pourfar) in a diner with her kids at 40. Separating from her husband, she is preparing to relocate from Dayton, Ohio, to Lexington, Kentucky, which does not thrill her two children (Kayli Carter, and Ryan Foust). Her daughter wants to know if she will keep her last name? All of a sudden, identity and who we are come into play.
We next meet Mary Page (Emma Geer) at 19, as she has her Tarot cards read by a college roommate, as her other roommate listens (Tess Frazer and Audrey Corsa). The cards tell her “You are in charge of your own destiny”, but we know for Mary Page this will be a lie. 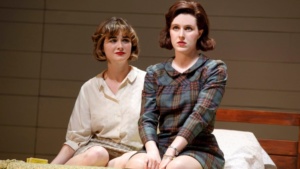 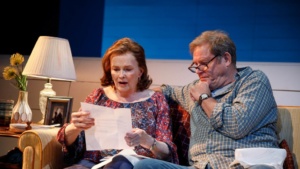 At 63, Mary Page (Blair Brown) is married and living in Kentucky. Technically challenged, she is stuck and content with her life the way it is. When she gets a letter telling her she is free of all parole restrictions, her and her third husband Andy (Brian Kerwin) weep.
Next, Mary Page is 9 months old, crying in her crib as her mother Roberta (Grace Gummer) walks out, due to her World War II vet husband Ed (Nick Dillenburg) refusal to communicate, yet he tenderly sings a lullaby to his daughter.In therapy, Mary Page (Tatiana Maslany), 36, discusses abortion and her sexual addiction. 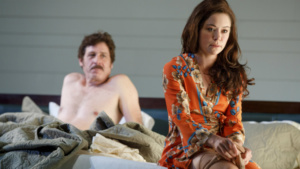 Page (Ms. Maslany) at 27, during her first marriage, has just slept with her boss (Gary Wilmes). He wants more, but she wants to go. When he doesn’t take no for an answer, she uses sex as control.
At 59, Mary Page (Kellie Overbey) is sitting at a table with her second husband, Ray (David Aaron Baker), discussing her options after her third DUI charge, which has a man in the hospital on the critical list. Matter-of-fact, she is unemotional as she tells her husband she is going to jail. He has no say in the matter. When he speaks, she explodes, as the frustrated Ray tries to get her to feel. It is raw, emotional, and like a lion let lose out of her cage.At 12, Mary Page (Mia Sinclair Jenness) mixes and makes her mother (Grace Gummer) drinks. Her mother emotionally puts down the girl and eventually leaves her with her grandparents. The cycle of alcoholism started here.

Though poetic and heartbreaking, the time frame to this play is non-linear. We learn throughout the course of the play that Mary Page was an alcoholic, a sex addict, at one time addicted to drugs which she passed onto her son, did not have a good rapport with her children, and is not exactly a wonderful person. Mary Page is a victim of her circumstances, who, only in the end, makes her life count.

Lila Neugebauer’s direction brings out the realness of life. This play is raw, and the performances are all spectacular, especially Kellie Overbey’s moment of rebellion, despite the fact that Mary Page, for the most part, is a selfish woman who seems to think of nobody but herself.

Lett’s gets to the heart of the matter as he fleshes out his characters with such an overwhelming amount of truth. Mary Page Marlowe is a reflection of our society and we all need to take a look.

Suzanna BowlingOctober 12, 2021
Read More
Scroll for more
Tap
She Says: The Boys In The Band a Reflection of How Bitter We Are
She Says: Head Over Heels Which Way is Up?