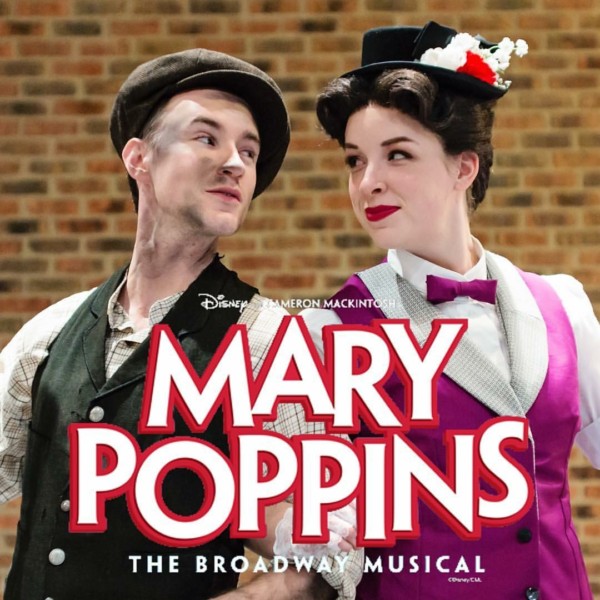 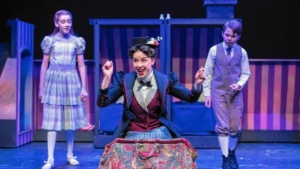 Just a spoonful of silly is absolutely what the doctor ordered to help the medicine go down. The timing of Mercury Theater’s ambitions staging of Disney and Cameron Macintosh’s Mary Poppins musical delivered a brief “Jolly Holliday” from a world quivering by fretful headlines. Purposely played over exaggerated, this campy gift is worth the price of admission to escape from the unending CNN and Fox News barrage of constant dread from today’s uncertain political climate. Constrained only by its budget, this magical tale featured dancing statuary, high stepping chimney sweeps, chatty birds of the feathered variety, an array of spectacular vocal talents doing what they do best, an extraordinarily promising bright new star on the Chicago theatrical horizon and a score that will resonate with you days after seeing this production. “Anything Can Happen If You Let It” is one of the newer songs in this piece and could also be our nation’s new mantra. Within reason, of course. The entire production is broadly painted with very wide strokes, more in the tune of a classic Hanna-Barbera cartoon than anything Disney related, yet I appreciated the silly whimsy this Mary Poppins yielded. 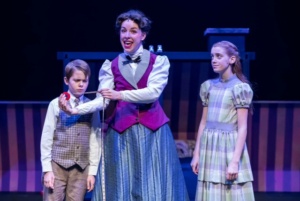 Director L. Walter Stearns mounted a family friendly musical that pleases the ears while tugging at the heartstrings. The sentimental got lost in the jovial antics from time to time, but all was forgiven once this remarkable cast started to sing. Inspired by the 1964 Disney film and P.L Travers’ children’s book, nanny Mary Poppins (an impressive debut from Nicole Armold) is summoned to fix the relentlessly mischievous Banks’ family children, Jane and Michael (Pearle Bramlett & Sage Harper alternate Jane while Casey Lyons & Peyton Owen share the duties of playing Michael) but of course she ended up having a remarkable affect on all who crossed her path. It is a jolly holiday with Mary, after all. Ridged and emotionally reserved Bank Executive and family patriarch, George (Kevin McKillip) and his dutiful wife, Winnifred (Cory Goodrich) ended up having their lives of “Precision and Order” on “Cherry Tree Lane” vastly improved from the valuable lessons of “A Spoonful of Sugar” and “Let’s Go Fly a Kite.” Along the way, we also meet Mary’s very good friend and jack of all trades, Bert (the masterful, scene stealing Matthew Crowle) who doubled as both narrator, aspiring artist, and dancing chimney sweep on the roof tops of London. Potential paramour as well.  The chemistry between the two leads was certainly palpable. The remaining goofy supporting cast exploded off of the stage at every turn. 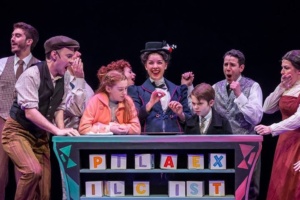 Under the tutelage of Music Director Eugene Dizon, the cast absolutely shines. The score of classic songs from the original film are mixed with an array of enjoyable fresh songs scribed by George Stiles and Anthony Drewe. For those who have never seen larger productions, Poppins, by design, is a great big spectacle. The cast worked the isles as much as the stage to really sell it. No show about this famously flying governess could fully work without her actually taking flight, seamless by the talented crew at Vertigo.  Keeping her cool throughout the proceedings, Armold’s Poppins is the epitome of restraint. It truly is her way or the highway. Her imaginative and authoritative outlook drove the story’s action. When confronted by the villainous Miss Andrews (Holly Stauder) the Holy Terror of Nannies, sporting a Cruella De Vil, skunk tail streaked wig, these two rivals “throw down” Real Housewives of Cherry Tree Lane style. Poppins never does let us see her sweat. Stauder may play the menace, but her “Brimstone and Treacle” contained an astounding soprano proving anything but scary. The character of Mrs. Banks began as a dutiful yet harried wife, however with Cory Goodrich bringing her signature verve to this character, this wife is anything but a wallflower. Continuing a long history with the Mercury Theater as an A + supporting trouper, Leah Morrow played an assortment of characters here too, including Mrs. Corry and Miss Lark, while effortlessly stealing every scene by which she graced the stage. Her “Supercalifragilisticexpalidocious”  lead production number had the audience clapping and singing along as well. This vignette alone should make choreographer Brenda Didier proud. Reimagined with children’s letter blocks spelling out that tongue-twisting “biggest word you’ve ever heard” across the entirety of the stage. 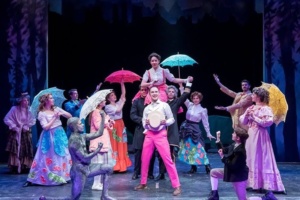 While the cast sang “stretch your mind beyond fantastic, dreams are made of strong elastic” the constraints of the budget clearly showed. Rachel Boylan’s costuming was more often than not, far too gimmicky to be believable.  As was Kevin Barthel’s wig design. Even Adam Veness’s set pieces underwhelmed. The mystic quality required to witness Mary pulling items out of her oversized carpetbag  was rendered far less magical when the audience could see her putting the pieces together on stage from our seats. The song may read “if you reach for the heavens, you get the stars thrown in” but the grasp here was a bit of an overreach. 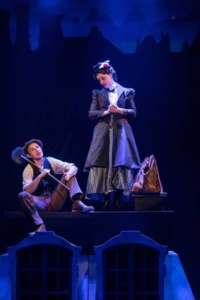 Mary Poppins is a grand scale musical that struggles in the confines of the stage at the Mercury. I must disclose this is the fifth version of Poppins I have watched since the original Broadway production. Each time, the scale continually grows smaller and smaller. That remarkably impressive set would be impossible and improbable to match at the Mercury. Thankfully they didn’t even try. With that said, this two hour and 35 minute production is lively, effervescent, silly, mad cap, and escapist fun I truly had no idea I so desperately needed. Despite the superficial flaws, this show proved to be a great and well paced night out for the entire family. This talented cast working tirelessly for every (thankfully) prevalent laugh. The musical numbers from the endearing “The Perfect Nanny,”  poignant “Chim Chim Cher-ee,” gorgeous “Feed the Birds,” to the high flying “Step in Time” simply enthrall and delight. A fitting reminder, Anything Can Happen If You Let It.

Mary Poppins is now playing at the Mercury Theater through May 28, 2017

Suzanna BowlingJanuary 28, 2023
Read More
Scroll for more
Tap
The Easter Parade in Pics
He Says: Groundhog Day What Will Tomorrow Bring If Tomorrow is Today?