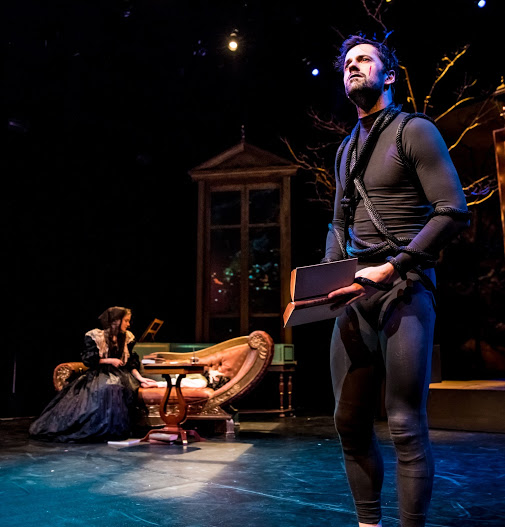 Mary Shelley’s Frankenstein: A Beautiful Monster in a Messy Landscape

Mary Shelley’s Frankenstein: A Beautiful Monster in a Messy Landscape

Ross
Before heading to the Pershing Square Signature Center to see the last NYC show of the year for me, my friend and I pondered what kind of show will Ensemble for the Romantic Century‘s production of Mary Shelley’s Frankenstein be. It stars Robert Fairchild, an incredible dancer and actor who won numerous awards for his star-making performance in An American in Paris who also choreographed his dance scenes within this story. So will this be a play with dance? Or a ballet? It also has an opera singer, a mezo-soprano by the name of Krysty Swann (Mozart’s Requiem at Carnegie Hall) and a television heart-throb actor, Paul Wesley (‘The Vampire Dairies‘, Rattlesnake’s Cal in Camo) as well. So what would those components add up to?
These were the questions that floated through our conversation before arriving, and sad to say, they were the same questions we were asking ourselves throughout this bewildering mess of a staging. I’m not sure where to lay the blame though as so many elements were off and fighting with one another. I guess the main culprits would be the misguided direction by Donald T. Sanders (ERC’s Van Gogh’s Ear) coupled with a convoluted and pretentious script by Eve Wolf (ERC’s The Heart is Not Made of Stone). The casting was perplexing, leaning towards marketing concepts over stage experience and talent. The design was random, extremely clunky, and unfocused. And the direction dull and distracting. The only element in totality that survived unharmed in this sloppy contrived attempt to create art were the musicians. Each one performing beautifully showing grace and skill with every note. Swann sings beautifully each time she floated onto the stage. Parker Ramsay, playing the organ and harpsichord is magnificent, giving this show the only bit of Gothic edge throughout. Kemp Jernigan on oboe, and Steven Lin on piano performs with skill and emotional energy, but unfortunately, the three musicians stand alone in that acknowledgment.
The set and costumes, designed by Vanessa James (Public’s Thomas Cole) are haphazard and oddly amateurish. The strange center piece is clumsy, looking like it was bought used from an amusement park. With what looks like black electrical tape, lighting cords appear to be taped to a screen. I’m guessing this was supposed to look like veins but they had a plastic glow in the dark quality that only made me think of those things that people tie around their wrists at dance parties worldwide. The furniture pieces in front of another unneeded and chunky window frame looks out of place and is awkwardly used, getting in the way more than advancing the flow. There are some possibly beautifully crafted projections, designed by David Bengali (EST’s Spill) that are utilized well, but their dramatic flair is greatly lessened by that ugly centerpiece that stands stoically in the way. The landscapes and indoor settings that are projected add poetic dimension, but are distractingly out of sync at certain moments. At one point on the back wall there was a beautiful peaceful snow-covered scene, but projected in the window frames was what appeared to be a blizzard. The lighting, by Beverly Emmons (Broadway’s Annie Get Your Gun) is flat, too broad and the opposite of Gothic style. The stage is so overly lit that any intimacy is made impossible. The follow spot used on Fairchild barely registers and our eye is constantly distracted by unnecessary movements in the periphery. Had the production relied on the projections solely with a stronger gothic sense of lighting and tone, something more coherent could have been created.
The actors, Mia Vallet (Rattlesnake’s Asheville) as Mary Shelley, and the very handsome Wesley as her husband, poet Percy Shelly (and Víctor Frankenstein) fail to elevate the overly dramatic dialogue into anything resembling authentic, floating in and out of modern vernacular and posturing. As directed by Sanders, Wesley only walks on, smoldering as if he is waiting for his television close-up, delivers his lines stoically, and walks off. Vallet did the opposite, constantly floating around the stage, fiddling with books and journals when the focus should have been elsewhere. She delivers her lines in a way that only brings to mind a comparison to Madonna, when she delivers a speech trying to sound wise and important with a strange pseudo-British accent, enunciating every syllable to its detriment. Rocco Sisto (Broadway’s Amadeus) as De Lacey and William Godwin, is the only actor on stage, besides Fairchild, who gives anything resembling a stage performance.  I hate writing these words, I really do, tearing into someone’s attempt, but there is no other way to describe it.  These actors needed a stronger hand to guide them, and not let them flail around on their own using old habits that may work well in television, but not on stage.

Robert Fairchild’s performance, is one of the stronger aspects in this muddled play.  He does a fine job showcasing the Monster’s struggle and discontent.  The costuming is odd, but his movements become stronger and stronger as the production moves forward. His delivery of his lines sounds true, honest, and compelling. The Mezzo-Soprano sings beautifully as she tries to sooth the Monster, but feels like one too many cooks in an already crowded kitchen.  The idea of trying to find connection between Mary Shelley’s traumatic personal grief with the creation of this classic story is a compelling idea.  And to fill out the emotionality of the narration with a powerful classic score coupled with dance, might have worked wonders.  But the story and this production is as lost as that Monster flailing around in the woods.