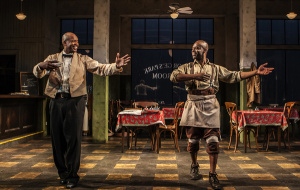 “Anybody who thinks there’s nothing wrong with this world needs to have his head examined. Just when things are going all right, without fail someone or something will come along and spoil everything. Somebody should write that down as a fundamental law of the Universe. The principle of perpetual disappointment. If there is a God who created this world, he should scrap it and try again.”

There are some amazing performances and shows this year, Master Harold … and the Boys written and directed by South African writer Athol Fugard at the Signature Theater is on that list. Fugard has long written about apartheid, racism and it’s effects and with his production at the Signature Fugard does Fugard well. 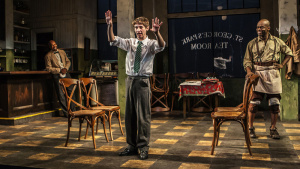 This three-character play, takes place in 1950, at a teashop in Port Elizabeth South Africa. Both Sam (Leon Addison Brown) and Willie (Sahr Ngaujah), have worked for the family and in the shop for awhile. Now in their 40s, Sam is a waiter, with much more brains, while Willie, does the dirty work and is a little slow. Both are black. They have been looking after 17-year-old Hally (the fantastic Noah Robbins), the son of the teashop’s owners, who is “privileged” in the sense that he is white. He arrives from school as it is raining. 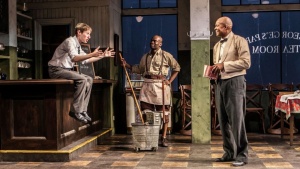 The boy’s have been Hally’s lifeline, with Sam calling Hally by name. Sam however still uses Master. Halley learns that his mother has gone to the hospital to bring home his alcoholic abusive father. This upsets Hally whose camaraderie was dictated out of friendship not skin. He knows that the racial system is morally wrong, holding out hope for a better day. 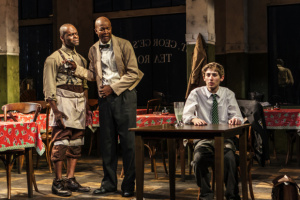 When Sam gently tries to get Hally to see how he loves his father Hally turns and their friendship is forever changed. The moment is heartbreaking. The affection between Sam and Hally changes and we see how prejudice is deeply rooted.

Mr. Robbins is perfection as Hally. From his South African accent, to his breakdown of right from wrong, we see the breakdown of society in the way Mr. Robbins disintegrates from needy child to prejudice adolescent. Mr. Brown performance is compelling with his understated presence, showing Sam’s intelligence despite the lack of learning. Mr. Ngaujahbest known for creating the title role in “Fela!,” adds a much needed humor .

By the end Master Harold… and the boys is a lesson learned simply by watching this riveting play performed, directed and stated so well.

Those are big collisions, Hally. They make for a lot of bruises. People get hurt in all that bumping, and we’re sick and tired of it now. It’s been going on for too long. Are we never going to get it right?…Learn to dance life like champions instead of always being just a bunch of beginners at it?

Master Harold… and the boys: Pershing Square Signature Center, The