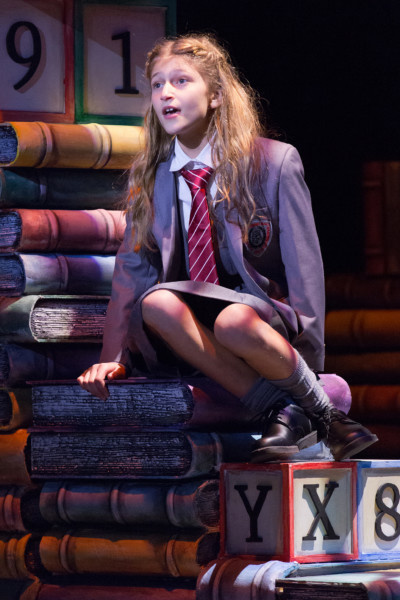 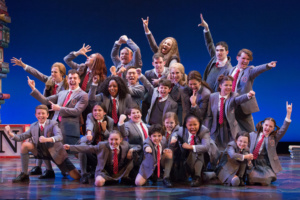 Jemma Bleu Greenbaum and the cast of Matilda

It’s big, it’s brash, it’s British – It’s Roald Dahl’s Matilda – The Musical which opened last night at the Walnut Street Theatre. Based on the beloved children’s novel, Matilda, by British writer Roald Dahl (author of James and the Giant Peach, Charlie and the Chocolate Factory) it was made into a film in 1996 directed by Danny DeVito and debuted as a musical in 2010 at the Royal Shakespeare Company in London garnering 7 Olivier Awards. (The most ever won by a single show.)The following year it transferred to the West End where it is still running today.  It opened on Broadway in 2013 winning 5 Tony Awards. 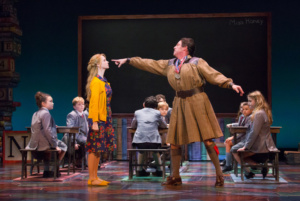 Matilda is the story of a five-year-old girl with a limitless imagination who loves to read. Overcoming the obstacles put in her way by an ignorant family and a cruel headmistress, against all odds she changes her unhappy existence and helps her teacher to reclaim her life.

The book by playwright, Dennis Kelly is frighteningly funny and touching at the same time. The music and lyrics by Tim Minchin are reminiscent of a modern Gilbert & Sullivan operetta. Especially in songs such as “The Smell of Rebellion”, where if you don’t prick up your ears you will miss a tongue twisting couplet spewed forth like a Tommy gun from the lips of Miss Trunchbull.

Diminutive in size but huge in talent, Jemma Bleu Greenbaum is delightful as the unwanted and beleaguered Matilda. A child who yearns for knowledge and is thrilled by the worlds that books open up to her, she is thwarted at every turn by her boorish, ignorant and unloving parents and the tortures of an evil headmistress at her school.  Ms. Greenbaum is charming in her modest simplicity and powerful with her mighty little voice.

The show boasts a large, strong cast. The Children’s Ensemble and the Adult Ensemble are all, without a doubt, chock full of talented people both big and small.  But of special note are Christopher Sutton as the unctuous Mr. Wormwood, Lyn Philistine as the slatternly Mrs. Wormwood who dances up a storm, Laura Giknis as the sweet but persevering Miss Honey, Demetria Joyce Bailey as the very funny librarian, Mrs. Phelps and Jacob Tischler as the fabulousRudolpho. However, the Barrymore must go to Ian Merrill Peakes as the abhorrent Miss Trunchbull.  Dominating the stage with his hideous presence, he doesn’t merely chew the scenery – he devours it and everything in his/her wake. He is truly the villain we love to hate.  Never have I laughed so much!

Needless to say, the direction by Linda Goodrich is perfection. The choreography by Michelle Gaudette is fun, spirited and surprising. And the musical direction by John Daniels is terrific.

This is a show that will charm young and old. (Though not too young, as there are some frightening parts for little children to absorb.)

For tickets go to www.WalnutStreetTheatre.org