Matt Bogart Leads The Cast of Himself and Nora

Matt Bogart Leads The Cast of Himself and Nora

The James Joyce-inspired Himself And Nora will star Matt Bogart (he plays Robert Goulet in HBO’s “Vinyl” and played JFK in NBC’s “Smash;” on Broadway, he had leading roles in Miss Saigon, Jersey Boys and Aida). Himself And Nora will begin performances May 14th at the Minetta Lane Theatre. Opening night is June 6th. T2c was on hand with the cast at the meet and greet. We interviewed Matt and caught up with the writer and recorded some of the songs. 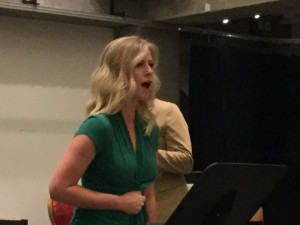 Whitney Bashor ( The Bridges of Madison County) is Nora, in the new musical that chronicles the love story between celebrated writer James Joyce and his muse, Nora Barnacle.

Himself And Nora has a book, music, and lyrics by Jonathan Brielle and will be produced by Cherie King (who is married to Brielle) and executive produced by R. Erin Craig. It’s the “untold story,” as the producers describe it, of the Ulysses author’s “lifelong love and muse Nora.” The show was developed at San Diego’s Old Globe Theatre; Hamilton Stage and the New York Musical Theatre Festival (NYMF). Additional developmental work was done with the James Joyce Center in Dublin, Ireland.

Brielle wrote the songs for Broadway’s Foxfire, starring Jessica Tandy, Hume Cronyn and Keith Carradine, and was Composer In Residence at off-Broadway’s Circle Repertory Company, where he wrote the scores for such works as Fifth Of July, The Great Grandson of Jedidiah Kohler and Besides Herself. Brielle also scored such Las Vegas extravaganzas as Enter The Night and MADhattan.