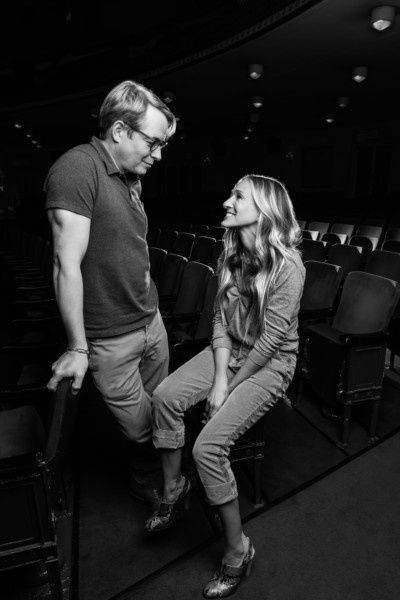 Plaza Suite will play a strictly limited 17-week Broadway engagement at Hudson Theatre (141 West 44th Street), with previews beginning March 13, 2020 and an official opening night set for April 13, 2020. Plaza Suite will mark the first time Broderick and Parker will share a Broadway stage since the 1995 revival of How To Succeed in Business Without Really Trying. This event will also mark Broderick’s return to the words of Neil Simon, having won his first Tony Award for creating the role of Eugene Jerome in Simon’s Brighton Beach Memoirs, followed by its sequel, Biloxi Blues.

Looking back on his three-decade long collaboration with the legendary playwright, Broderick said, “It was my great good fortune that my very first Broadway play was written by Neil Simon. He also wrote my first film. I owe him a career. The theater has lost a brilliantly funny, unthinkably wonderful writer and even after all this time I feel I have lost a mentor, a father figure, a deep influence in my life and work.”

Prior to coming to New York, in a move reminiscent of the golden age of Broadway when stars would take plays out of town, Broderick and Parker will travel with the production to Boston for a strictly limited 22-performance pre-Broadway engagement at the Emerson Colonial Theatre, the same theater where Plaza Suite had its 1968 world premiere and in 1976, Parker made her Boston stage debut as Flora in the pre-Broadway engagement of The Innocents.

Tickets go on sale to the general public starting at 10 AM ET on Wednesday, September 25.

Two world-class actors play three hilarious couples in this uproarious and piercing look at love and marriage from legendary playwright and Pulitzer Prize winner Neil Simon. This new production will mark the first revival of a Neil Simon play following his passing last August at the age 91. He is remembered as one of the most celebrated, successful, and beloved writers in Broadway history having written more than 30 plays and musicals.

Additional information, including complete casting, will be announced shortly.

Neil Simon (Playwright) has been represented on Broadway by Come Blow Your Horn; Little Me; Barefoot in the Park; The Odd Couple (1965 Tony Award); Sweet Charity; The Star-Spangled Girl; Plaza Suite; Promises, Promises; Last of the Red Hot Lovers; The Gingerbread Lady; The Prisoner of Second Avenue; The Sunshine Boys; The Good Doctor; God’s Favorite; California Suite; Chapter Two; They’re Playing Our Song; I Ought to Be in Pictures; Fools; Brighton Beach Memoirs; Biloxi Blues (1985 Tony Award); the female version of The Odd Couple; Broadway Bound; Rumors; Lost in Yonkers (1991 Pulitzer Prize, Tony Award);Jake’s Women; The Goodbye Girl; Laughter on the 23rd Floor; Proposals; The Dinner Party; and 45 Seconds From Broadway. His Off-Broadway credits includeLondon Suite. His films include Barefoot in the Park, The Odd Couple, The Out-of-Towners, Plaza Suite, The Heartbreak Kid, The Prisoner of Second Avenue,Murder by Death, The Sunshine Boys, The Goodbye Girl, The Cheap Detective, California Suite, Chapter Two, Seems Like Old Times, Only When I Laugh, I Ought to Be In Pictures, Max Dugan Returns, Brighton Beach Memoirs, Biloxi Blues, and Lost in Yonkers. Simon passed away in August 2018 at the age of 91.

Matthew Broderick most recently starred in The Starry Messenger, at Wyndham’s Theater in London’s West End. In 2018, he appeared in The Seafarer at the Irish Repertory Theater and The Closet at the Williamstown Theater Festival. Previously, he was seen in The New Group’s Evening at the Talk House at the Pershing Square Signature Center and in Shining City at the Irish Repertory Theatre (Obie Award). Prior to that, he starred in A. R. Gurney’s comedy Sylvia alongside Annaleigh Ashford. He made his stage debut at 17 in Horton Foote’s On Valentine’s Day opposite his father, James Broderick. Off-Broadway: Torch Song Trilogy (Outer Critics Circle, Villager Award), The Widow Claire. Broadway: Brighton Beach Memoirs (Tony, Outer Critics Circle, Theatre World awards), Biloxi Blues, How to Succeed in Business… (Tony, Drama Desk, Outer Critics Circle awards), Night Must Fall, Taller Than a Dwarf, The Producers (Tony, Drama Desk, Outer Critics Circle nominations), Roundabout’s The Foreigner, The Philanthropist, The Odd Couple, Nice Work If You Can Get It and It’s Only a Play. TV: “The Music Man” on ABC and “Master Harold and the Boys” on Showtime. Films include: Max Dugan Returns, WarGames, 1918, On Valentine’s Day, Ferris Bueller’s Day Off, Project X, Ladyhawke, Biloxi Blues, Glory, Family Business, The Freshman, The Lion King, Infinity (directed by Mr. Broderick and written by his mother Patricia Broderick), The Cable Guy, Addicted to Love, Inspector Gadget, Election, You Can Count on Me, The Last Shot, Marie and Bruce, Strangers with Candy,Wonderful World, the film adaptation of The Producers, Bee Movie, Then She Found Me, Finding Amanda, Tower Heist, Rules Don’t Apply, and Manchester By The Sea.

Sarah Jessica Parker has worked in theater, on and off Broadway, since 1976 when she debuted on Broadway in The Innocents directed by Harold Pinter.  Other Broadway credits include: the title role in Annie, How To Succeed in Business Without Really Trying, and Once Upon A Mattress. Off-Broadway credits includeSylvia (originated titled role Manhattan Theatre Club, Spring 1995: Drama Desk nomination 1995), The Substance of Fire by Jon Robin Baitz (Playwrights Horizons, Lincoln Center Theatre), The Heidi Chronicles by Wendy Wasserstein (Playwrights Horizons), To Gillian On Her 37th Birthday (the original production, Ensemble Studio Theatre, Circle in the Square ), April Snow by Romulus Linney (Ensemble Studio Theatre), and By Strouse (Manhattan Theatre Club). Parker starred in HBO’s highly acclaimed television series, “Sex and The City” from 1998-2004 for which she received an Emmy and four Golden Globe Awards. She reprised her role for the screen adaptation of the hit series with the theatrical release of Sex and The City and Sex and The City 2. Past film credits include Here and Now, I Don’t Know How She Does It, Smart People, Failure To Launch, The Family Stone, State and Main, Mars Attacks!, Ed Wood, The First Wives Club, Miami Rhapsody, Honeymoon in Vegas, Footloose, and L.A. Story. Parker recently starred in HBO’s “Divorce” for three seasons. She was nominated for a Golden Globe for her performance. Other television credits include “Equal Justice” and “Square Pegs.” Parker currently serves as a Vice-Chairman of The Board of Directors for the New York City Ballet.