MCC Theater Wins The War with Space Dogs, the Musical MCC Theater Wins The War with Space Dogs, the Musical

“They were dogs!” and “These were their names!” And with that silly simplistic refrain blasted out loud and clear from its two creators and stars, Space Dogs, a new musical at the off-Broadway MCC Theater (which ended its run on March 20th, 2022), springs with science non-fiction glory into action. It’s a lovable nod to a moment in history that ricochets about the theatre with an infectious glee, guaranteed to make you smile, mainly because of the wild enthusiasm by the writing talented team of Van Hughes (Deaf West/Broadway’s Spring Awakening) and Nick Blaemire (Keen Co’s Tick, Tick…Boom!). In what has to be the most rambunctious passion project around about scientists sending stray dogs into space feels genuinely kind-hearted, although somewhat like a feel-good entry into some obscure fringe festival. The musical dutifully and charmingly traces the story of how the Soviet Union used a pack of dogs; no, not the stuffed variety adorably utilized on stage, smoking cigarettes and engaging in casual prison talk as designed by Amanda Villalobos (Broadway’s Is This A Room), but the real-life variety, to keep the Soviet Union ahead of the United States in their desire to conquer space. One doggy at a time. 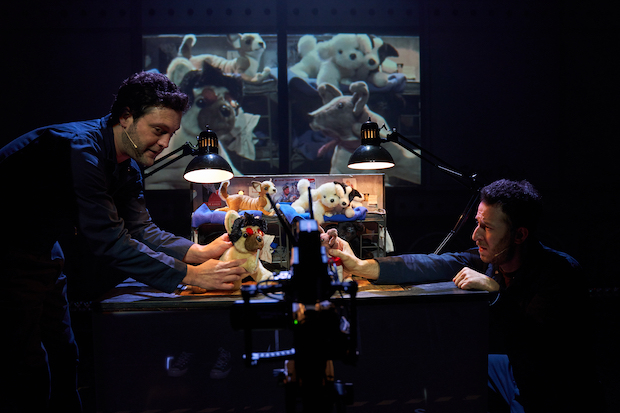 It’s the cutest construction, in what honestly feels like the most strange tense time to be playfully engaging with Russians and their Cold War antics as a real war rages in Ukraine. But if that separation can happen inside your brain, I can safely say it is because of the inventiveness of Hughes, Blaemire, the finely focused direction of Ellie Heyman (AMFAR’s “The Great Work Begins…“), and the tuned-in playful choreography by Darrell Grand Moultrie (TNG/Vineyard’s Daddy). They all seem to be having a grand old time, sharing their utter fascination with the tale, or should I say, the tail being illuminated here, and even if the team fails to make you as excited by the story as they obviously are, the encapsulation and the energetic performances of these two really do keep you focused, charmed, and engaged.

“For reasons that are questionable,” Sergei Korolev, one of the many roles played by Hughes, finds himself placed in the distinguished, but tense position of Chief Designer of the Soviet space program, ordered, not so subtly, to win the space war with the US at all costs. Inside that race is one stray dog by the name of Laika who Korolev unwittingly develops a strong emotional bond. Laika, the world-famous Russian dog who went down in history as the first animal to orbit the earth in 1957, becomes not only his focal point, but ours as well, as they blast this stuffed beast up into the stars. The two creators strengthen our care and attachment to the adorable puppet with each cleverly created song from a catalog that seems to rocket us through a wildly varied encyclopedia of ballads and anthems with ease. None of them will really remain for too long in your memory, but when performed so vividly and enthusiastically by these two buddies, the space war will feel won, even before the first blast off into space.

Playfully enhabiting the wise and acrobatic theatrical space, designed with appeal by Wilson Chin (Broadway’s Pass Over), with fun costumes by Haydee Zelideth Antuñano (Pipeline/Ars Nova’s Playing Hot), exacting lighting by Mary Ellen Stebbins (HERE’s Between The Bars), and a strong sound design by Nathan Leigh (NYTW’s Nat Turner in Jerusalem), Hughes and Blaemire, inside all the roles they take on, find an equally adorable balance of playfulness and geeky educational instruction never letting us fall too far out of their inner crafty circle. It’s an impressive feat, finding emotional clarity in all the relationships they so dutifully present, particularly the one between Korolev and the stuffed dog, Laika. We care about Laika right to the bitter end, not because the stuffed dog is so adorable, which it is, but because the creators obviously care so very very much on every level, and infuse the piece and their songs with that love. Their chemistry is contagious, delivering sneakily and with a smart sense of fun into every aspect of their musical space project. Space Dogs certainly did entertain, but maybe not with the same level of enthusiasm the creators have living and breathing inside.

Suzanna BowlingJanuary 24, 2023
Read More
Scroll for more
Tap
Broadway Does Concert of The Little Match Girl to Support UNICEF and Te Ukraine
The Human Voice in the West End Connects Even When Disconnection is at its Core