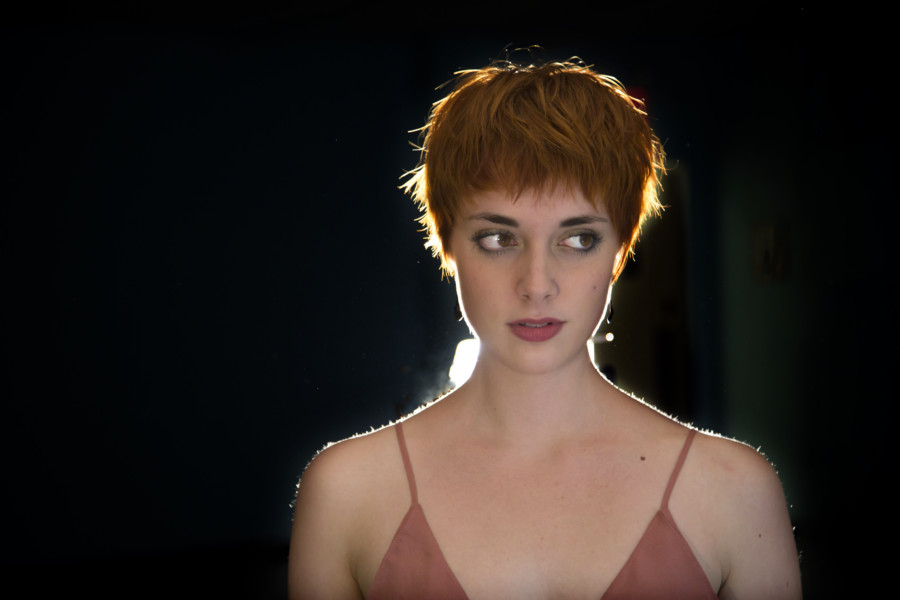 Medusa Heart of Stone a Play About Women

Medusa Heart of Stone a Play About Women

“It was ended by selflessness  And a little bit of love

Islands exist for a reason

You used to believe  the expression was true

But now you see that islands  help people be born anew”

Playing at the WinterFest at the Hudson Guild Theatre is an interesting piece of theatre. A show conceived and directed by by a young man in his early 20’s, Kaleb Tank. He brings with him his fellow students from Pace (Drum Jokes Ensemble), to tell the story of Medusa Heart of Stone. 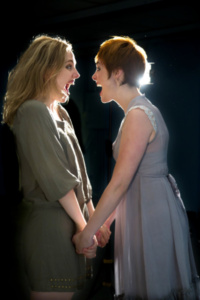 The plot consists of the three fates (Brianna Janoczkin, Yassi Noubahar and Evy Vaughan) who set up the who, what, when and where, introducing us to our heroine Medusa (Olivia Vordenberg). At a young age Medusa is left alone, until the goddess Athena (Remi Segal) befriends her. Wanting to go to Athens and be apart of the world, the young Medusa asks Athena for her help and the next day she is met by the young princess Andromeda (Bethany Burnham) and her snobby mother Cassiopeia (Madeline DeFrence). The princess and Medusa form a strong bond, while the mother is in disgust over the lowly Medusa being her daughter’s friend. 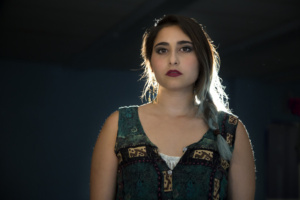 Years pass and now Medusa is a High Maiden of Athena, while the strong willed Andromeda “Andy,” wants to be a singer, but is stifled by her mother. Andy is there for her friend, but when Aphrodite (Hannah Sikora) wants Medusa to betray Andy. In order to get her way and become a goddess, even though her reasoning is for a good cause, Medusa agrees to the betrayal. 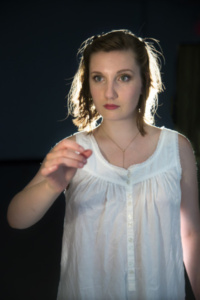 Back after some time comes Athena who is in love with Medusa, can’t find the words to tell her. Medusa who hasn’t a clue continues with her plans to meet Poseidon (Michael Elliot) and the two connect sexually. When Athena discovers the betrayal she turns Medusa into a monster with a head of snakes and casts her to the underworld. Medusa meets the blinded Persephone (Erin DiIorio

) who teaches her about living with ones fate and making the most of it. Aphrodite mad that Medusa did not carry out her plans curses Andy and the only cure is to chop off the head of Medua. Cassiopeia goes to carry out the task and in a fit of anger Medusa turns her into stone. Andy seeking Medusa discovers what Medusa did and cancels the friendship telling Medusa she never supported her ambitions and was never there for her. When her fiancé Perseus (Michael Elliott) comes to kill Medusa, she is willing to sacrifice herself for her friend. In the end the girl who wanted to be a goddess becomes one without the fanfare.

Mr. Tank directs this piece with a fresh eye. In a way the show is reminiscent of last year’s Hadestown at NYTW. With a budget and tightening of the script by Brandon Adam, especially the scene in the begining with Andy and Medusa, this piece is actually better. I would also add more music by Ms. Burnham, Ms. Vordenberry , Hannah Sikora, but more songs like the ones sung by the Fates. The song sung by Andy was week and like Hadestown, you can‘t have the person whose known for their singing have a mediocre song, they need the best.

Ms. Segal, Ms. Sikora and Ms. DiIorio are all wonderful actresses and make the most out of their roles. Michael Elliott is sexy and has charisma. His sex scene with Medusa is hot. Bethany Burnham is beautiful but inconsistent and needs to work on some pitch problems. Also she should be in the white dress the entire show. Madeline DeFrence seems like she is in a different show in costume and tone. Also she needs to learn how to project. This role could have been really juicy. The three fates were perfect and Ms. Noubahar has a killer voice. As Medusa, Ms. Vordenberg is layered, raw, honest and an actress that we will be seeing a lot of. She carries this show and makes us care about her, root for her and love her. We ache as her journey progresses and long for a happier ending for her.

Medusa Heart of Stone is for women everywhere who are struggling with identity, purpose and the choices they have made. It is insightful and complex, with some really good acting. For a first time production by college students, it is remarkable how good it is. Medusa Heart of Stone is better than a lot of shows I have seen off and off off Broadway. I highly recommend this production.

“you look at the world and see wonder. You look at the world and see good in people. You’ve seen the good in me. Even when I was a lonely girl from the country. Even when I didn’t deserve it. That’s what makes you special, Andromeda. You always reach out. You always say “Hello.” And so I want to say “Hello” to you one last time. I stand here with nothing to give but myself. And so I give myself to you…because you’ve been my friend. I only ask one thing. When you’re queen and some little girl asks you if she can be a God one day, look her in the eyes and tell her she already is one. “