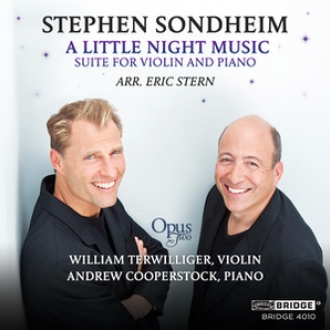 Opus Two, violinist William Terwilliger and pianist Andrew Cooperstock  has been internationally recognized for its “divine phrases, impelling rhythm, elastic ensemble and stunning sounds,” as well as its commitment to expanding the violin-piano duo repertoire.

To celebrate Stephen Sondheim’s 90th birthday in 2020 they released A Little Night Music (Suite for Violin and Piano), They celebrated the release with an appearance at Broadway’s renowned 54 Below nightclub.

T2C talked with this fascinating duo.

Opus Two gives us the premiere recording of arranger Eric Stern’s suite from Stephen Sondheim’s A Little Night Music. About Sondheim’s brilliant show, Stern writes that, “each moment, from the opening Night Waltz to A Weekend In The Country to the iconic Send In The Clowns is its own take on a triplet feel, perfectly suited to the individual characters and the situations they find themselves in. I am extremely grateful for his permission to arrange this suite”.

The duo has also presented master classes worldwide from Juilliard to the China Central Conservatory, and they have served on the faculties of the Saarburg (Germany) International Music Festival and School and the International Concerto Festival (Czech Republic). Champions of American music, Opus Two has recorded a critically acclaimed series of single-composer discs dedicated to the music of Aaron Copland, George Gershwin, Paul Schoenfield, Lowell Liebermann, and Leonard Bernstein.