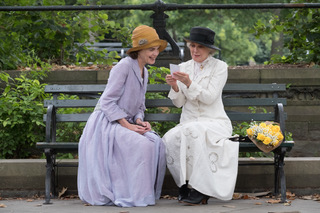 Costume designer Candice Donnelly has designed for Broadway, theatre, film, TV and opera. She was brought onboard PBS first Masterpiece feature film, The Chaperone. The film marks the reunion of Downton Abbey‘s writer (Julian Fellowes), director (Michael Engler), and star (Elizabeth McGovern). Based on the best-selling novel of the same name written by Laura Moriarty. The film follows a woman from Kansas as she undergoes life changes when she acts for a chaperone a wild child dancer on a trip to New York City.

The costumes for this period piece leads you through the early 1920’s to 1940’s. From midwestern overalls to shimmering flapper dresses, Candice was responsible for all of the gorgeous looks featured in the film. She’d love to walk you through her period research and how vintage Vogue magazines led to her vision of a more colorful, stylish, and bright New York, as seen in the trailer. Candice also worked tirelessly with the film’s choreographer to ensure that the costumes are design to be historically accurate, easy to dance in, and of course, look stunning on screen.

T2C got together with Candice to discuss all things costume.

T2C: What is your favorite costumes to design for?

Candice Donnelly: Period pieces, as I find it interesting and I love doing the research. I love fabrics and trying to re-create the way they moved. I foind myself digging up and looking at old photographs. What was beautiful then is different from now. How women look and their decorum was based on their clothes.

T2C: What era is your favorite?

T2C:You’ve work a lot in theatre. What are the differences between film and theatre?

Candice: In theatre you have a lot more time. In film it’s dependent on budget and casting, which is normally done last minute. You have to be on your feet, as locations can change. Film is immediate.

T2C:What are the challenges of this film?

Candice: This didn’t have a big budget. It was also a short production period. We only had 20 days and it kept getting shorter and shorter.

Candice: Lady Gaga, I think she is amazing. Or Beyoncé.

T2C: Of all the shows which was your favorite?

Candice: I love doing opera. My favorites were Madame Butterfly and Haroun And The Sea Stories. Those costumes were lovely.

Candice: A period TV Show and another Broadway show.

T2C: What advice would you give young artists who want to design?

Candice: You have to be really curious about a lot of different things. You have to love visual design. I am passionate about this. Also there is lots of research and it’s a little tough to break into. Just be curious and keep exploring.

T2C: Who were your influences?

T2C:What show made you want to be a designer?

Candice: Fashion designers, clothes and I could sew. While others were into acting, I worked in costume shops at ACT, Boston Opera and Yale. Also Vogue was a big influencer.

Candice: That I have a good sense of humor, I really enjoy what I do and enjoy working with everyone.

The Chaperone is set to release in theaters March 29 and will air on PBS stations after its initial theatrical run.