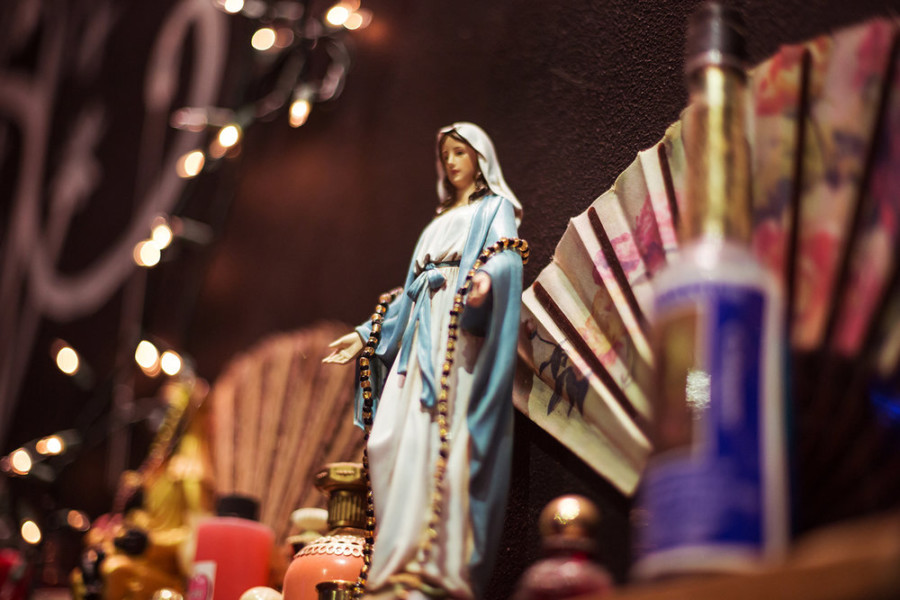 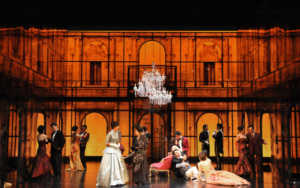 The Roman Spring of Mrs. Stone

Dane Laffrey is an American designer based in New York City. He studied at Australia’s National Institute of Dramatic Art and resided in Sydney from 2002 – 2006.

On Broadway he designed the set for the current hit revival of Lynn Ahren’s and Stephen Flaherty’s Once On This Island (Circle in the Square), set and costumes for the acclaimed Deaf West revival of Duncan Sheik and Steven Sater’s Spring Awakening (Brooks Atkinson) and set for the Broadway premiere of Sam Shepard’s Fool For Love (Friedman). 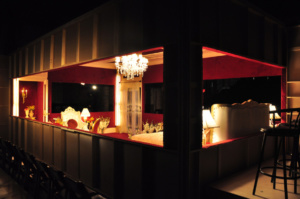 His work won him a 2017 Obie Award for Sustained Excellence of Set and Costume design and he has been nominated for a Drama Desk Award, 5 American Theatre Wing Henry Hewes Design Awards, an Ovation Award (LA) and a Sydney Theatre Award as well as numerous regional accolades.

T2C: How did you become involved in set and costume design?

Dane Laffrey: It’s the only thing I’ve ever done. I started in community theatre in high school, but it was when I went to a boarding school called Interlochen Arts Academy that I began to specialize in set and costume design. It felt like the best contribution I could make to theatre, which I already knew I loved.

T2C: You worked a lot off Broadway, off-off Broadway and regionally. How did you get your first break to work on Broadway? 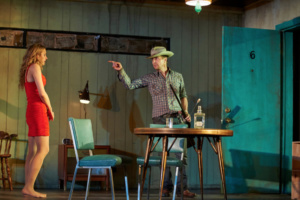 Dane Laffrey: My first show on Broadway was supposed to be Sam Shepard’s Fool For Love. That year [2015] I had also been working on Deaf West’s Spring Awakening in LA– the Broadway transfer of that production actually became my Broadway debut. Ironically (and hilariously) they were at The Friedman and The Brooks Atkinson, respectively, which are across 47th street from each other. The shows were in technical rehearsals on a very similar schedule, and that proximity allowed me to effectively be in two places at once which was incredibly helpful. 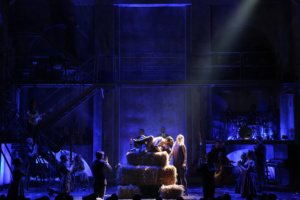 T2C: How did you come up with the idea for your design for Once This Island?

Dane Laffrey: Though not explicitly mentioned in the text, Once On This Island is set in Haiti. Our process began by researching that place and its people, with a particular focus on the harrowing effect of the earthquake in 2011 and Hurricane Matthew several years later. We felt it was hugely important to do our best to honestly and responsibly portray the world that our research, and an eventual trip to Haiti last spring, led us to understand. It’s a world that has a dangerous relationship with the natural elements, populated by incredibly vibrant and resilient communities who survive. A world still working to heal the racial and social divides of a colonial past. A world whose history is steeped in Vodou practice, from which the four Gods who drive the story of Once On This Island are derived. The story of the show and the specific realities of contemporary Haiti feel inexorably bound to one another; our reimaging of the show and the design are all about presenting the story in a truthful and recognizable context. 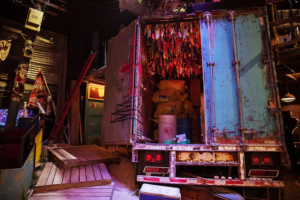 T2C: This is an ecological masterpiece. Where did you find all your elements?

Dane Laffrey: The set is comprised of many salvaged elements. Most everything is a custom build on some level, but comprised of numerous found pieces carefully incorporated into my existing design. This meant a lot of patience and care on the part of the teams of fabricators in two countries to respond to the found objects and integrate them piece-by-piece, or modify them to fulfill the numerous unusual needs of a musical. We have the back of a jackknifed tractor-trailer onstage, for example. It is (mostly) a real truck, but the shop who salvaged it had to make it much stronger so it could support the weight of the band on top, and completely disassemble it in modular components so it could be transported into Circle in the Square, down a freight elevator. The exterior and interior were painted based on a design from my research, but we were careful to not cover the corrosion and rust that came with the object. Real objects introduced into a theatrical environment bring their past lives with them in a powerful way, and I’m thankful to the incredible team of builders and artisans who helped me bring literally hundreds into the design. 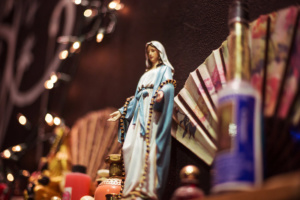 T2C: What is your favorite surprise hidden in the set?

Dane Laffrey: When we finally saw the space empty last year, we found an odd architectural feature that wasn’t on any of the blueprints: a long, horizontal slot running most of the width of the back wall. Inside it, I installed a long altar, full of icons, Vodou paraphernalia and offerings to the Gods of our island. Most of the audience can see it as a graphic element in the wall, but those up close in the onstage seating bank (which incidentally is another entirely custom aspect of the design) get a totally different perspective with lots of cool detail.

T2C: What was the most difficult element?

Dane Laffrey: I think the thing we wrestled with the most (from a design standpoint) was how to deal with the idea that, at the end of the show, our heroine Timoun is transformed into a tree. There’s obviously no literal way to do that, but we wanted to be sure we provided some visual catharsis to underscore what this transformation represents: transcendence, renewal, rebirth. From the early stages of the design process, I loved the idea of a downed power pole that had fallen into the audience, held up on crushed theatre seats. The gesture felt bold, but more importantly represented a tangible connection between space and design; a violent collision between Circle in the Square and the world of the island. Our visit to a Vodou temple in Haiti greatly influenced our conversations about the finale. All Vodou temples have a vibrantly decorated central totem, called a poto mitan, which represents a connection between the mortal world and the realm of the Gods. In Vodou practice outside a temple, a tree is often used to represent the same connection. At the end of the show, our downed power pole is resurrected and reveals itself to be this kind of totem. Ours is decorated with photos of our company’s loved and lost. It not only represents Timoun’s transition between worlds, but also the connection between our company of actors and the characters they play.

T2C: Of all your work, what has been your favorite and why?

Dane Laffrey: In general, I’m really bad at picking favorites. But, at this moment I do have to say Once On This Island. It really was a labor of love. I spent two years designing the show and was with the installation of the set every single day it was in the theatre, adding and refining the details of the space until the moment we stopped work on the show. I feel deeply connected to the space. Object by object, piece by piece, week by week it became a 360º environment. I love making work like that. 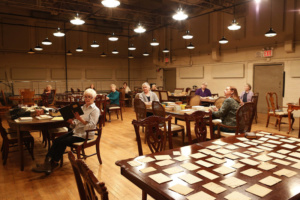 T2C: I absolutely loved your work on I Remember Mama. How did you come up with that concept?

Dane Laffrey: Jack [Cummings III] is a director I work with a lot. I’ve always liked making challenging spaces for him. Jack’s cast for I Remember Mama was comprised entirely of women over the age of 70. It was profound to experience the play through this lens, and that approach certainly pushed us very far from the idea of anything that was spatially literal or representational. The design we arrived at was 10 heirloom dining room tables and 60 chairs flooding the gym at Judson Church, with audience on four sides. The tables were covered in heirlooms on display, many belonging to the company members. It was a memorial or remembrance space. It shares a lot of DNA with the spirit of the tree in Once On This Island, now that I think of it.

T2C: You also design costumes; where does your passion lie?

Dane Laffrey: In storytelling. I just happen to do both. I like being a narrative storyteller through the design work I do, in whatever discipline.

Dane Laffrey: I would LOVE to work in the Park Avenue Armory. I’m obsessed with that space and many of my favorite shows in recent years have been in it. I love spaces with some kind of extraordinary dimension, be it height, width, depth–the Armory has all of those in spades!

T2C: What is your advice for young designers?

Dane Laffrey: I am excellent cook.

T2C: What’s next on the plate for you?

Dane Laffrey: Summer and Smoke at CSC, Peace for Mary Francis at The New Group, Dave, the new musical at Arena Stage, Annie at the Hollywood Bowl. Then Dangerous House at Williamstown and Collective Rage: A Play In 5 Betties at MCC, both written by my partner Jen Silverman.

Suzanna BowlingJanuary 22, 2023
Read More
Scroll for more
Tap
One Thousand Nights and One Day Taps into the Universe and Captivates
Royal Shakespeare’s King Lear Doesn’t Rip Us Apart Near Enough