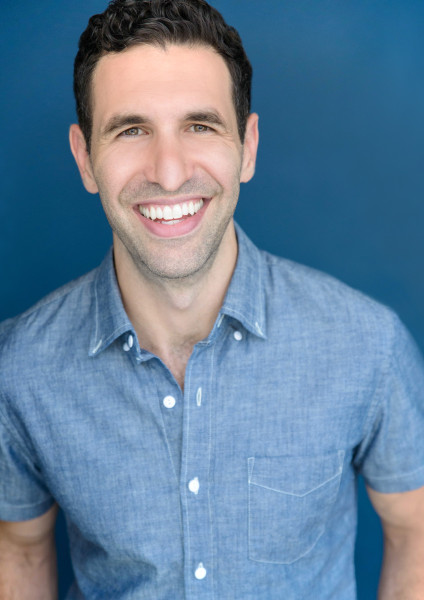 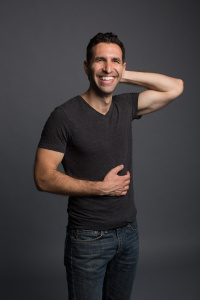 David Perlman was on Broadway in Baby It’s You Off-Broadway with Yank!, at Radio City Music Hall with Madagascar Live. He has played Motel in Fiddler on the Roof at Goodspeed, PCLO, and Arena Stage. He was in the controversial opera Anna Nicole the Opera at BAM and played the European stages in Hair (Woof). He loved doing Sunset Boulevard with Liz Callaway and Stefanie Powers. TV credits include The Mysteries of Laura, 30 Rock, and Law and Order. Currently he is starring in a dog story opening tonight at the Davenport Theater. 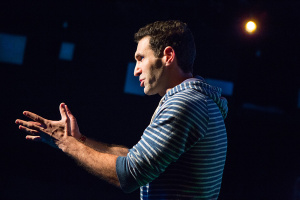 In a dog story photo by Jeremy Daniel

T2C: How did you get the role of Roland?

David Perlman: Really great story. In 2012, Eric Weinburger told me he wanted to write something for me. I was flattered, honored and skeptical, we meet a few times. Eric sent me an e-mail and then he sent me some of Gayla D Morgan’s music and lyrics. Then came a first draft. I did readings for the show in 2013 and 2014 in Key West. In his bio he thanks me and states he wrote the role for me. 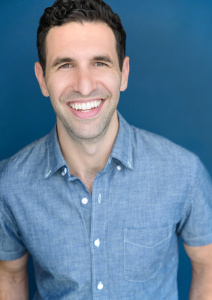 T2C: What of yourself do you bring to the role?

David Perlman: The role has a lot room for me to bring a lot of different parts. Roland is funny and nervous. The show is a comedy with heart. That all pretty much describes me. I love comedy but also I have real depth and heart. That’s why this show is the perfect show for me.

T2C: What are you favorite roles? 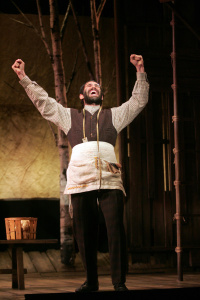 Fiddler On The Roof
Goodspeed Musicals

David Perlman: My favorite role is Motel in Fiddler on the Roof, because he is so courageous. He over comes his fears every night on stage. To me a perfect kind of musical is Little Shop of Horrors, another comedy with heart. I loved playing Seymour. 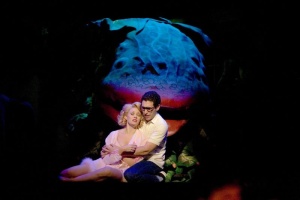 David Perlman: The Baker in Into The Woods. More mature roles as its time to move onto those kinds of roles. I really want to take on roles that say something that have substance, that really make a difference. I mean once again I love Fiddler. I have a connection with this show, those could have been my relatives. Tradition vs progress an ever-present theme. It always seems to be applicable to know.

T2C: What composers or directors would you like to work with?

David Perlman: Jeff Blumenkrantz, his songs are so beautifully structured and he’s really funny. Sam Carner and Dick Gregor are new and I have sung a lot of their music. They wrote Unlock’d.

I would love to work with John Rando, his work is so smart and funny, also Casey Nicholaw 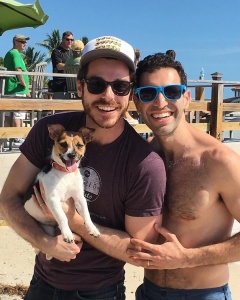 with husband Trey Gerrald and Winnie

David Perlman: We open on Thursday so anything can happen. My husband is actually doing It’s Only a Play in Key West. I am going to visit him. I am also a Photographer,

T2C: What kind of photographer and where can we find your work?

David Perlman: davidperlmanphotography.com I do a lot of headshots and more and more events weddings, parties and some productions. I love photographing people. 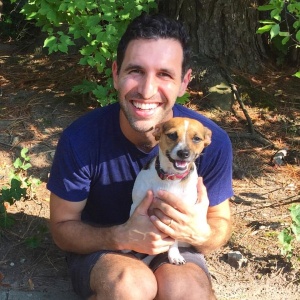 David Perlman: Yes, She is a Chihuahua, toy fox terrier, jack Russell mix. Her name is Winnie and she is 2 years old. She was a rescue.

RossJuly 22, 2021
Read More
Scroll for more
Tap
Othello Remix a Hip Hop Rappin Tale From The Bard
Countdown to Christmas: Website and Help That Gives Back To Women and Transgender Artists