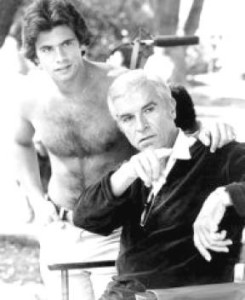 Lorenzo Lamas has played many roles throughout his career. He’s starred in two major television shows, “Falcon Crest” and “Renegade,” has been married five times and been the subject of many tabloid stories. The son of Fernando Lamas and Arlene Dahl, who became the step-son of Esther Williams. Both Williams and Dahl were also best friends of actress Jane Wyman, who knew him since birth, so when he starred in “Falcon Crest” he completed a circle. 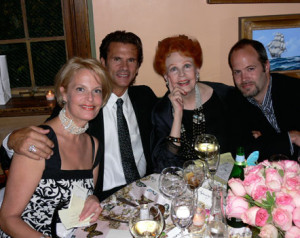 with his mother Arlene Dahl

Lamas had a supporting role in the 1978 film Grease, as well as Switch, Sword of Justice, Dear Detective, Secrets of Midland Heights, Fantasy Island, The Love Boat and Hotel. 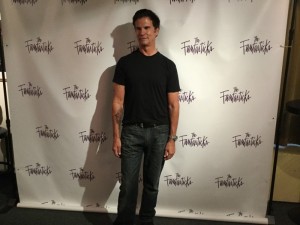 In August 2007, Lamas starred as the King of Siam in The King and I at the Ogunquit Playhouse in Ogunquit, Maine. That fall, he performed at Kean University Premiere Stages in Union, New Jersey, in the title role in Steven Dietz’s Dracula. Lamas performed as El Gallo in The Fantasticks at the Casa Mañana Theatre in Fort Worth, Texas, in June 2008, directed by Tom Jones. In June 2009, Lamas returned to the Ogunquit Playhouse as Zach in A Chorus Line.

In 2009, he starred in the Asylum’s Mega Shark Versus Giant Octopus as Alan Baxter, a government agent who wants to destroy both the Mega Shark and the Giant Octopus to protect the world from their destructive fights. In December 2014 he published his autobiography, Renegade at Heart. In 2015 Lamas was a cast member of the reality TV series Celebrity Apprentice.

Starting October 24 thru November 6 he takes on again the role of El Gallo at the Theater Center. 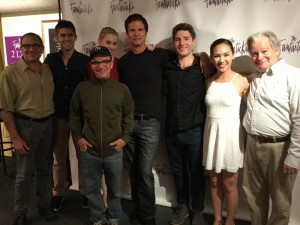 The cast of The Fantasticks

The current cast of The Fantasticks features Andrew Polec as The Boy (Matt), Madison Claire Parks as The Girl (Luisa), Donald Corren as The Boy’s Father (Hucklebee), Dale Hensley as The Girl’s Father (Bellomy), MacIntyre Dixon as The Old Actor (Henry), Michael Nostrand as The Man Who Dies (Mortimer), and Drew Seigla as The Mute. The cast also includes John Thomas Waite, Rob Richardson, and Belinda Allyn.

The Fantasticks, featuring music by Harvey Schmidt and book, lyrics, and direction by Tom Jones, follows a boy and girl who fall in love and then quickly grow apart. The score includes hit songs such as “Try to Remember,” “Soon It’s Gonna Rain,” and “They Were You.”

Suzanna BowlingJanuary 13, 2022
Read More
Scroll for more
Tap
Judith Light and Leigh Silverman Spoke In Ernest For The League of Professional Theatre Women
Kate Baldwin Explains How She is An Extraordinary Machine