Meet Me in St. Louis For a Zing Zing Zing Heartstrings Great Time 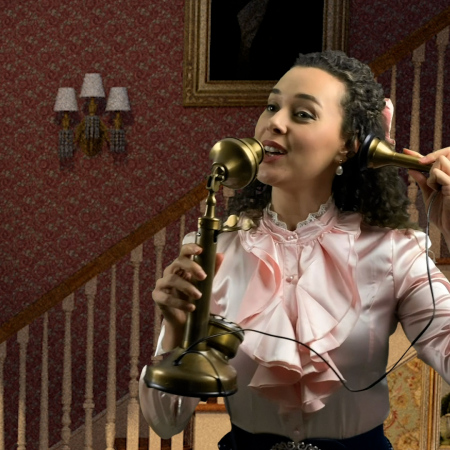 Meet Me in St. Louis For a Zing Zing Zing Heartstrings Great Time

I must first admit to you all, maybe shockingly, that I have never seen the movie, ‘Meet Me in St. Louis‘, the 1944 film that starred the iconic Judy Garland, that this altered stage version was based upon. But I do know the name, Melissa Errico, who dazzled the audience at the Irish Rep in 2018 when she took to the stage for another classic musical, On a Clear Day You Can See Forever. “Sublime” is all I can say, so when seeing her name attached to this production, and for that reason (almost) alone, I just had to tune in and see what this streaming musical show was and is all about. With a book by Hugh Wheeler and songs by Hugh Martin and Ralph Blane, Meet Me in St. Louis, the streamed musical adapted and directed by Charlotte Moore (Molly Sweeney: A Performance on Screen) for the IRT stage, is as delicious and delightful as one could hope for. The sound of that score is just spectacular, from the first few moments when the band, lead by music director John Bell (IRT’s Finian’s Rainbow) and orchestrator Josh Clayton (LC’s My Fair Lady) chimes in with the overture to the very happy ending had by all. “I just adore, so I can’t ignore” this impressive restructuring that the IRT did to stream this out to us all for the holiday season. It truly is a luscious musical gift it there ever was one.

Based on ‘The Kensington Stories‘ by Sally Benson and then that famous MGM motion picture, the tender sweet story of the Smith family, that takes place, unsurprisingly, in St. Louis, Missouri from 1903 to 1904, has found its way most beautifully onto our home tv fully intact, even though I have nothing to compare it to. IRT’s small screen streamed version of Meet Me in St. Louis finds connection in its “clang, clang, clang” delivery, singing forth the music and the gentleness of these people with effortless charm. The company had been planning on presenting this musical on its intimate stage this holiday season, but the pandemic forced it to be redesigned for our streaming pleasure. And they could not have found a more loving crew of fantastic and dedicated singers and actors to work their magic in front of a green screen for us all, so that the technical wizards, including editor, Meridith Sommers; scenic designer Charlie Corcoran (IRT’s The Seafarer); mix, music, and sound designer M. Florian Staab (Public’s Teenage Dick), lighting designer Michael Gottlieb (IRT’s On Beckett / In Screen); and costume consultant, Tracy Christensen (Broadway’s Sunset Blvd); along with production manager Brandon Cheney; Production Coordinator Pamela Brusoski (IRT’s The Emperor Jones); and Producing Director, Ciarán O’Reilly (IRT’s The Weir: A Performance on Screen), could find a magnificent way to combine and layer all the pieces together to give us the semblance of a staged musical. It’s as sweet as the musical itself, and made my heart strings go “zing zing” as happily as one could could sing the tune while riding a trolley.

The film, back in the day, was a major success becoming the second-highest grossing picture of 1944, and no wonder, as the story is just lovely in its sweet technicolor simplicity. Directed by Vincente Minnelli, and starring Judy Garland, who would later marry her director, ‘Meet Me in St. Louis‘ gifted the world with Garland singing such classics as the fun “The Trolley Song“, the romantic “The Boy Next Door“, and the ever-so perfect “Have Yourself a Merry Little Christmas“, all of which became solid hits after the film was released. Luckily for the Irish Rep production, the cast charmingly sings these standards just as beautifully, giving care and style to every classic note. https://c0.pubmine.com/sf/0.0.3/html/safeframe.htmlREPORT THIS ADhttps://c0.pubmine.com/sf/0.0.3/html/safeframe.htmlREPORT THIS AD

To open, the Smith family beckons us enthusiastically to meet them all in St. Louis for the upcoming World’s Fair that is arriving the following summer to their much loved hometown, St. Louis. At the head of the household dining table is Alonzo Smith, solidly portrayed by Rufus Collins (Broadway’s An Ideal Husband), who finds middle class happiness with his gorgeously patient and loving wife Anna, perfectly played by the golden voiced Errico, getting a little help from the sassy spirited Irish housekeeper, Katie, devilishly portrayed by the very funny Kathy Fitzgerald (Broadway’s The Producers).

It’s a picture perfect household, with four daughters and one son, Lon, well played by William Bellamy (IRT’s Finian’s Rainbow), embracing the world they live in with apple pie goodness. They all are almost too sweet for words, literally, but somehow the ladies; Kylie Kuioka (York Theatre’s Panama Hattie) as the youngest trouble seeking daughter, Tootie; Austyn Johnson (“The Greatest Showman“) as the other young singing mouse Agnes; Ali Ewoldt (Broadway’s Phantom of the Opera) as the feisty forceful Rose, and Shereen Ahmed (the current star of the National tour of LC’s My Fair Lady) as the apple of our, and John’s eye, Esther (the role that Garland made famous), find the solid sisterhood core of playful frivolity in their kind and testy interactions; not the easiest thing to do, I might add, when the story is just so darn goodie two shoes mixed with a dose of sweet apple pie.

Ahmed steals the show, quite naturally, just as Garland once did, bringing a clear, sweet sound to Esther’s pining for “The Boy Next Door“, John Truitt, played most wisely by the gentle Max Von Essen (Broadway’s Anastasia). It seems that he almost doesn’t notice her at first, but the two meet cute and properly as the lamps are dimmed, and the inner flame of innocent love grows stronger. Von Essen’s voice is as velvety as one could hope for, and he delivers a gentleness that sits very well alongside Ahmed’s strong Esther as they ride the trolley together into each other’s arms. Another long-distance gentleman caller, the handsome and rich Warren Sheffield, delightfully portrayed by Ian Holcomb (IRT’s It’s A Wonderful Life) can’t seem to take his eye off another Smith sister. The New York City ladies “can’t hold a candle to you, Rose” he tells her, as he charmingly almost demands her affection, and eventual her hand. It’s silly clear-eyed fun, a bit sappy and sweet on the edges, but the energy and dated emotionality is infectious, and its heart sits exactly at the correct address.

There are a few wrenches thrown in the way of all their happiness as the calendar months zing by, leading them all up to Christmas, the dressup dance, and that famous Christmas song, lovingly sung by Ahmed. The connection seems quite clear, and even if you think this might not be your style, like John is for Esther, the production easily holds a candle to the classic filmic tale of family and romantic love, as clean and neat as the story demands. So gift yourself this Christmas treat, and buy yourself a streaming ticket so you can all Meet Me in St. Louis, when a date was called an engagement, and where the gentleness of this holiday tale will fill you with Christmas joy. So please, during these difficult days, let your heart be light. Next year, hopefully, all our pandemic troubles will be miles away. Someday soon, we all will be together, if the fates allow. Until then, we’ll have to muddle through somehow. So “Have Yourself a Merry Little Christmas” night.