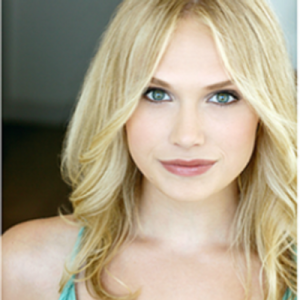 Charlotte Maltby is the daughter of theatre lyrist Richard Maltby and director Janet Brenner. Already in her young life she has played Fantine in St. Louis Muny’s production of Les Miserables, participated in the original readings of 13, where she originated and entitled the role of Charlotte, the reinvented Babes in Toyland at Lincoln Center’s Avery Fisher Hall where she originated the newly written role of Jenny and Hello! My Baby as Nelly Gold. At the University of Michigan, she has played Ilse in Spring Awakening and Romaine Patterson (among others) in The Laramie Project. She will also appear in AWOL and The Last Five Years film, directed by Richard LaGravenese. Currently she is wowing audiences in Starting Here, Starting Now at The York. 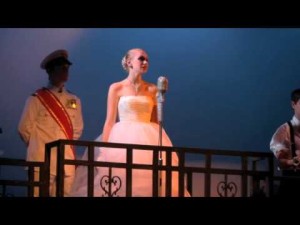 As Evita at Stagedoor Manor

T2C: What is your training?

Charlotte Maltby: The first show I did was Peter Pan in Kindergarten. I wanted to play Smee, not Peter or Wendy. I wanted to be funny. I got laughs and there was no turning back. When I was in 3rd grade, I did the workshop of Captain Louis and from that point on I knew what I wanted to do. My whole family is in the arts. I have the support of all my siblings and parents. I performed a lot at Stagedoor Manor. I was really lucky to be given roles out of my comfort zone. I was shown I could do more than one thing.

T2C: How many of you’re father’s shows have you done?

Charlotte Maltby: This is my first and first time working with him. It was so easy. We went from our father/daughter relationship straight into director/actor. We speak the same language.

T2C: You have such an extensive range are you happier with the soprano repertory or the alto belting?

Charlotte Maltby: I grew up as a soprano and I hated that. I wanted to do shows like Wicked, but was doing Rodgers and Hammerstein. Now I am glad for the backbone of that training. 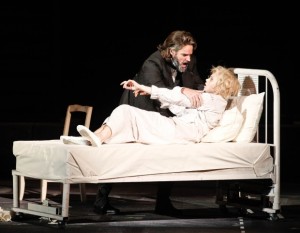 With Hugh parent in Les Miserables

T2C: What are your dream roles?

Charlotte Maltby: It hasn’t been written yet. I like originating new roles. Of course I would love to do Amalia in She Loves Me or Eliza Doolittle in My Fair Lady. When I get older I would love to take on Next to Normal.

T2C: I see you are doing a new film called Aquarius. Who do you play and when does it come out? 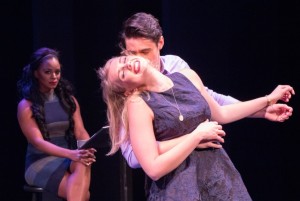 Charlotte Maltby: It’s actually a NBC TV series about the early days of Charles Manson. I almost could not do Starting Here, Starting Now as the schedules conflicted, but then they got pushed back until the day after we close. David Duchovny plays Sam Hodiak, a fictional LAPD detective investigating the case of a missing teenage girl. It’s about Charles Manson and I get murdered.

T2C: What is your favorite song to sing of your father’s and why? 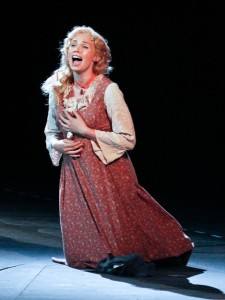 As Fantine in Les Miserables

Charlotte Maltby: “Story Goes On” From Baby. That is the one that I’ve sang the most and I have sung it often. Another favorite is “If I Sing,”from Closer Than Ever, It is a song he wrote about his father and that is how I feel about my father.

T2C: Has it been helpful or harder being Richard Maltby’s daughter?

Until this show, it has never really come up. He has always been my dad. It wasn’t until I got to college, that I realized who my father really was. I never felt like I was in his shadow, but feel like I have someone who I can ask all my questions too.

T2C: What shows and roles would you like to take on? 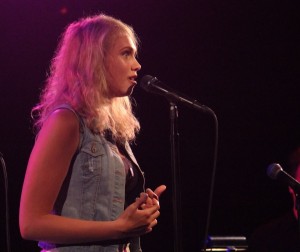 Charlotte Maltby: My real dream is to be on my own sitcom. Paid to be goofy and weird, just sounds like the greatest thing in the world. I want to work in all possible mediums. I also write. I want to be like Leah Dunham and be part of the creative process.

T2C: You were with the Broadway bound Empire, there have been rumors that it coming to New York, will you be with the show?

Charlotte Maltby: If I were asked, I would be absolutely honored to be with it. I had so much fun working with Marsha Milgrom Dodge. I worked with her in The Secret Garden and it was life changing. She breathes life into everything. I learned so much about story telling from her. What was great about Empire was it was my first time working on a full mounted production of a new work. You actually have an impact on how the show is shaped. You are a part of it.

Charlotte Maltby: I am person. I think people who are human beings and are curious make the best performers. Singing is my first love, acting is my goal in life, but what makes me hold onto everything, is that as long as you are your own person you can only be the best you.

You can see Charlotte in Starting Here, Starting Now at The York until March 20th.