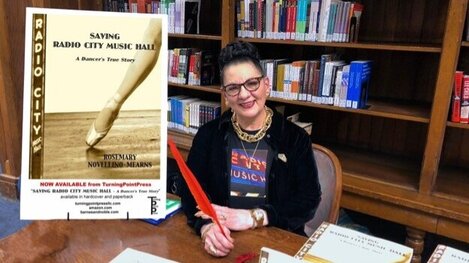 Did you know in the Spring of 1978 New York almost lost the iconic Radio City Music Hall? It happened due to questionable behind-the-scenes changes in the Music Hall’s management. The changes alarmed hundreds of employees, but no one was prepared for the official announcement in early 1978, that Radio City Music Hall was slated to close that April and be demolished. Rosemary Novellino-Mearns refused to let this happen. T2C talks with this unknown hero.

She became President of “The Showpeople’s Committee to Save Radio City Music Hall” and motivated fellow workers, friends, thousands of Radio City fans around the world. National media, cultural leaders and politicians were recuited to support the cause. As a result of these efforts, the Art Deco palace was declared a National Historic Landmark. saving not only the building but the jobs and livelihoods of thousands of Music Hall employees.

Rosemary joined the Radio City Music Hall Ballet Company, in the classical dance department, in 1966. Performing for them for twelve years, she become its Dance Captain and Assistant to the legendary choreographer Peter Gennaro. In the mid-1970s.

In her memoir Saving Radio City Music Hall: A Dancer’s True Story, Rosemary Novellino-Mearns shares her extraordinary experience. Her work after years is being honored at Grauman’s Egyptian Theater in Hollywood and other venues. Rosemary is also featured in the award winning documentary Going Attractions: The Definitive Story of The Movie Palace.

For her courageous efforts Rosemary was blacklisted, yet because of her millions of Americans and tourists can still enjoy this unforgettable theatrical experience. For saving this National Historic Landmark Rosemary should be celebrated as a hero.