Meet Sam Bolen From Midnight at The Never Get

Meet Sam Bolen From Midnight at The Never Get

An excerpt of Midnight at The Never Get was first present at Musical Theatre Factory’s 4×15 (as Midnight at the Rialto) in April 2015. The show subsequently was produced by Don’t Tell Mama, first as a sold-out developmental concert, and then as a limited-run production that extended due to popular demand. It was then produced in a sold-out run in the 2016 New York Musical Festival, followed in 2017 by a critically-acclaimed six-week engagement in Provincetown, Massachusetts, with The Never Get created as a fully immersive club venue. Now it gets a full run at The York Theatre. 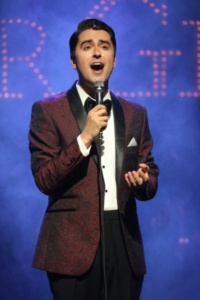 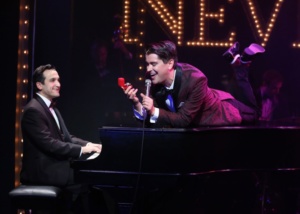 Midnight at The Never Get tells the story of singer Trevor Copeland and songwriter Arthur Brightman, who have the perfect New York romance. That’s swell. In 1965, it’s also against the law. So, in the back room of The Never Get, an illegal Greenwich Village gay bar, they put together a show called Midnight—a nightclub act where Trevor sings Arthur’s love songs with their male pronouns intact. But as the lovers hurtle toward the end of the decade, they find themselves caught in a passion they can’t control and a political revolution they don’t understand. 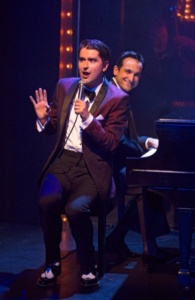 T2c had a chance to talk to the multi-talented Sam Bolen.

T2C: What gave you the idea for Midnight at the Never Get?

Sam Bolen: I was inspired by several tribute concerts, like the one for Marvin Hamlish. I thought what if we had a story about a fictional songwriter and we learn his story and the behind the songs.

T2C: What are the changes the show has gone through?

Sam Bolen: It started off with just me singing the songs and not really telling the story. As we have been development the book has gotten stronger. There is a fuller picture of the relationship and there are some new songs.

T2C: How did you get started in musical theatre?

Sam Bolen: I’ve done theatre since I was a  kid. I grew up in Duluth, Minnesota and performed in Community Theater, High School musicals and then went to college at Yale. My first show professionally was Gentlemen Prefer Blondes at Encores!

Sam Bolen: I have hit the jackpot working with Mark Sonnenblick’s. I would also like to work withJoe Iconis, Ben Wexler, I love the the team behind Grey Gardens Scott Frankel, and Michael Korie, also Duncan Sheik.

Sam Bolen: My dream role is Harold Hill in The Music Man. I know I am too young, but that is one I would love to do.

T2C: What is your favorite moment in Midnight at the Never Get?

Sam Bolen: There is a song that comes in the middle called “I Can Not Change The Way I Am”. It’s a love song and it’s the moment when the relationship gets into their romance. It’s this big breath of air in the middle of the show.

T2C: What song from the show moves you the most?

Sam Bolen: I really love the opening number “Mercy of Love”. It’s about opening up your heart and letting it all go and not preventing love to overcome and over take you. 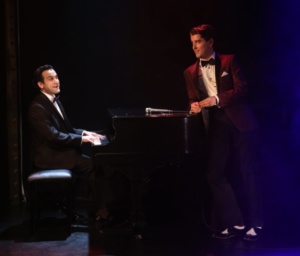 T2C: What are you hopes for Midnight at the Never Get?

Sam Bolen: Beyond this run, that we get to do an open ended run where more people get to see it.

T2C: They say eyes are the windows to the soul, I think songs are. What song or song cycle best describes you?

Sam Bolen: I always revert back to the American songbook. I love “Someone To Watch Over Me”. I am still searching for a lot of things.

T2C: What would you like us to know that we haven’t asked?

Sam Bolen: This show is beyond being a vintage era show. It’s fresh and funny and goes in a lot of surprising places. 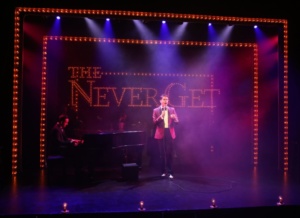 Midnight at The Never Get: The York Theatre at Saint Peter’s (entrance on East 54th Street, just east of Lexington Avenue). Opening Night is Thursday evening, October 11, 2018 at 6:45 p.m.and the show plays until Nov. 4th.