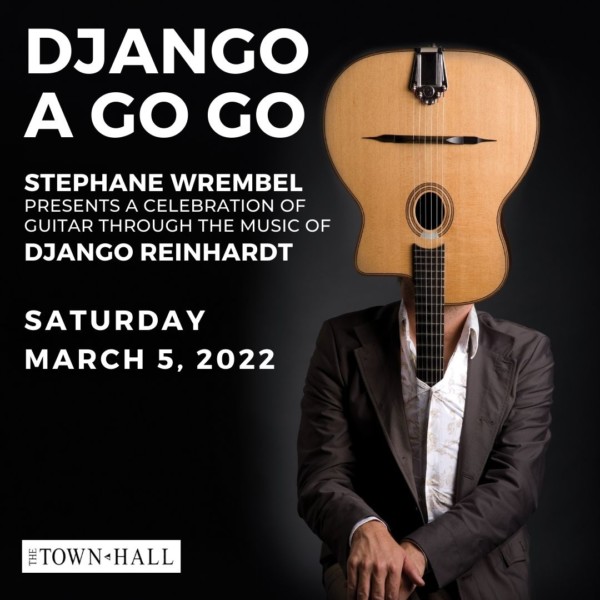 Suzanna Bowling
French guitar master Stéphane Wrembel is one of the world’s foremost specialists in the propulsive “hot jazz” style popularized by Django Reinhardt in the 1930s. He is set to open his 2022 “All-Star” Django A Gogo concert at The Town Hall on March 5 at 8pm. T2c sat down with the master and learned so much more.
The live concert will follow the Django canon and will veer into reinterpretation, improvisation and interplay between artists from various backgrounds, performed at the highest level of musicianship.
Besides the concert there will be a Django a Gogo® Music Camp is a first-class music program providing musicians of all levels and instruments access to the greatest knowledge and teachers available. The program focuses mainly on the musical style of Django Reinhardt (referred to as “Gypsy Jazz” in the USA). The goal of this camp is for students to learn from all the teachers and performers of the festival in an intimate, small group setting, or workshops. The camp runs from Tuesday, March 1st to Sunday, March 6th, 2022
Stéphane Wrembel specializes in the style of legendary composer/guitarist Django Reinhardt, learning his craft among the Gypsies at campsites in the French countryside. Wrembel has toured the world, while releasing 16 albums under his name and the nom de plume, The Django Experiment. He wrote music for 3 of Woody Allen’s movies including “Vicki Cristina” “Barcelona”, “Midnight in Paris” (“Bistro Fada”) and the original score for Rifkin’s Festival.
Video by Magda Katz
Related ItemsDjango A GogoDjango a Gogo® Music CampDjango ReinhardtFranceguitaristNewStéphane WrembelThe Django A Gogo Music FestivalTown Hall Concert
Events