Meet the Cast of Rodgers and Hammerstein’s Oklahoma!: Part 1 The Love Triangle 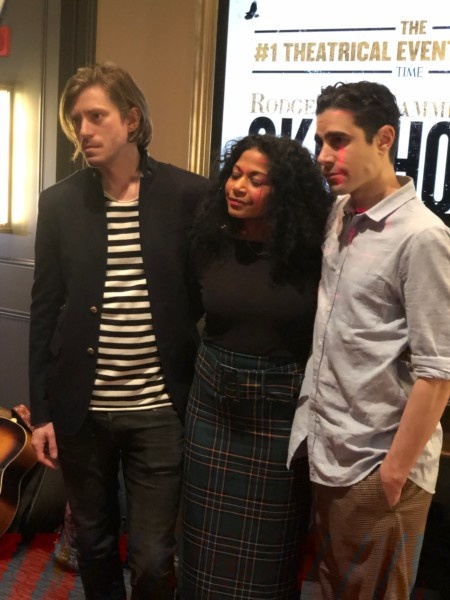 Meet the Cast of Rodgers and Hammerstein’s Oklahoma!: Part 1 The Love Triangle

Rebecca Naomi Jones is best known for her performances in the Broadway rock musicals Passing Strange, American Idiot, and Hedwig and the Angry Inch.

Damon Daunno is an Actor and Musician who appeared on Broadway in the Kneehigh Theater Co. Brief Encounter. Off Broadway he was seen in the Kneehigh Theater Co. Wild Bride and Tristan and Yseult at St.Ann’s Warehouse, Hadestown at The New York Theatre Workshop, These Paper Bullets at the Atlantic and The Lucky Ones at Ars Nova, where he was nominated for both a Drama Desk and won a Lucille Lortel Award. He was seen in The Following on Fox. Daunno is also a composer and multi-intsrumentalist and has produced scores for short and feature length films.

Patrick Vaill was in Macbeth at Lincoln Center. He performed in Edward the Second at Red Bull, When in Disgrace for Examined Man, Theater for the New City, NY Fringe, Fringe Encores, among others.

Next up meet the comic relief.