Meet the Cast of Rodgers and Hammerstein’s Oklahoma!: Part 2 The Comic Relief 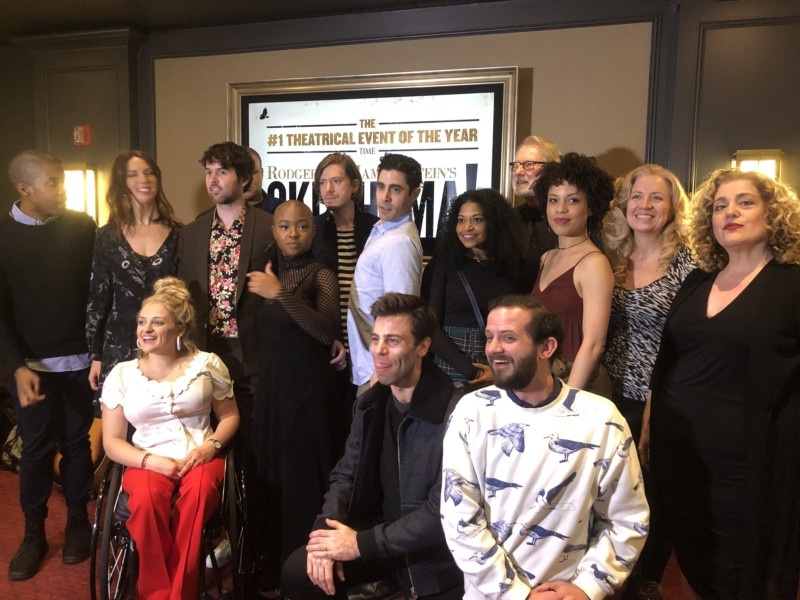 Meet the Cast of Rodgers and Hammerstein’s Oklahoma!: Part 2 The Comic Relief

Ali Stroker at the age of two Stroker was in a car accident that left her paralyzed from the chest down due to a spinal cord injury and unable to walk thus she uses a wheelchair. At the age of 7 she saw her first Broadway show and realized at that moment that was what she wanted to do, because there were no role models for girls in wheelchairs on Broadway. She is the first actress who needs a wheelchair for mobility known to have appeared on a Broadway stage. Stroker was a finalist on the second season of The Glee Project, and later appeared as a guest star on Glee in 2013. She played the role of Anna in Deaf West’s 2015 revival of Spring Awakening.[

Stroker played Tamara in the ABC show Ten Days in the Valley and isa Co-Chair of Women Who Care, which supports United Cerebral Palsy of NYC and is a founding member of Be More Heroic, an anti-bullying campaign which tours the country connecting with thousands of students each year.

Off Broadway, he starred in the Obie-winning premiere of Jackie Sibblies Drury’s We Are Proud to Present… at SOHO Rep, and in the Abingdon world premiere of The Mother of Invention by James Lecesne (founder of The Trevor Project). Other New York credits include productions at The Pearl Theater Company, LaMama, Soho Playhouse, Urban Stages, Rising Phoenix Rep, and Here Arts Center.

Regionally, James received an ensemble Helen Hayes nomination for his work in American Buffalo at Studio Theater in Washington DC, and played Juliet opposite Finn Wittrock’s Romeo in the all-male Romeo and Julietat Shakespeare Theater Company. Other regional credits include Clybourne Park at Long Wharf Theatre (CCC nomination for Best Ensemble) and a variety of critically-acclaimed roles at Quintessence Theater Group including Edmund Tyronne in Long Day’s Journey Into Night, King Richard II in King Richard IIand Jaques in As You Like It.

He holds a BFA from the Juilliard School.

Will Brill has appeared on Broadway, as part of the original cast of Act One and as Ed in the 2014 revival of You Can’t Take It with You. He has also appeared in off-Broadway productions of Tribes and Our Town, both of which were directed by David Cromer.

He is mostly known for his roles in known for The Marvelous Mrs. Maisel, Gotham, The OA, The Eyes of My Mother and Not Fade Away. He is Will in the soon to be released film The Scottish Play.

Suzanna BowlingFebruary 1, 2023
Read More
Scroll for more
Tap
Over 2,200 Students Have Attended GLORIA: A Life Through the Hope-aholics Donor Program
Betsy Wolfe Starts Her Cabaret Debut With All Bets Are Off