Meet The Cast of The Body of An American

Meet The Cast of The Body of An American 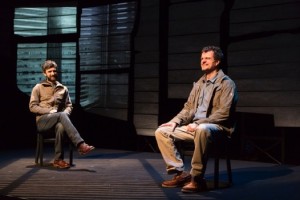 “If you do this, I will own you forever.” Canadian photojournalist Paul Watson is haunted by the words he heard a dead soldier say as he took the photo that would win him the Pulitzer Prize and reshape American foreign policy. Playwright Dan O’Brien, struggling with ghosts of his own, reaches out to Watson, and the two forge a friendship as they reckon with the traumas that have shaped their lives. The Body of an American is a bold, radically theatrical and poetic true story that ranges from Afghanistan and Iraq to the Canadian High Arctic. The Winner of the inaugural Edward Kennedy Prize, the Horton Foote Prize for Outstanding New American Play, and the PEN Award for Drama.

Primary Stages (Casey Childs, Founder & Executive Producer; Andrew Leynse, Artistic Director;)and Rhoda R. Herrick in association with Hartford Stage, presents The Body of an American, a New York premiere by Dan O’Brien (The Voyage of the Carcass, Soho Playhouse)and directed by Jo Bonney (Father Comes Home from the Wars…, Lost Girls). Featuring Michael Crane (Gloria, Bloody Bloody Andrew Jackson) and Tony Award nominee Michael Cumpsty (“Boardwalk Empire,” Machinal, End of the Rainbow, 42nd Street), the limited engagement runs February 10 – March 20, 2016 at Primary Stages at the Cherry Lane Theatre. Opening night is Tuesday, February 23 at 8PM.
The Body of an American tells the true story of an extraordinary friendship as two men, a war photojournalist and playwright, journey from some of the most dangerous places on earth to the depths of the human soul.  Winning rave reviews for its previous productions in London and elsewhere, The Body of an American by Dan O’Brien is “a play that tightens its grip as it probes where war lives, and discovers we each carry it inside ourselves.” (The Guardian)
The Body of an American features scenic design by Richard Hoover, costume design by Ilona Somogyi, lighting design by Lap Chi Chu, sound design by Darron L West, and projection design by Alex Basco Koch.
Related ItemsCasey ChildsJames ChladekKo BonneyMichael CraneMichael CumpstyNewRichard HooverSuzanna BowlingThe Body of AmericanTimes Square Chronicles
News