Meet The Cast of The Broadway Play Eclipsed as They Launch 10,000 Girls Campaign

Meet The Cast of The Broadway Play Eclipsed as They Launch 10,000 Girls Campaign 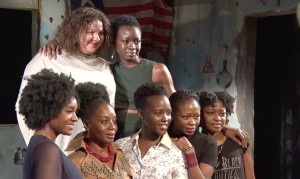 This morning the cast of Eclipsed meet the press as producers Stephen C. Byrd and Alia Jones-Harvey announced that the critically acclaimed show will launch a campaign to bring 10,000 girls to see the show.  Through the “10,000 Girls Campaign,” girls from the Tri-State area between ages 16 to 24, who would not otherwise have the opportunity to experience a Broadway show, will be given tickets to see Eclipsed.

Individuals or organizations can sponsor girls by making a tax-deductible donation through the Broadway Education Alliance by visiting https://npo.justgive.org/BroadwayEducationAlliance.  For more information, on the ’10,000 Girls Campaign’ visit www.tenthousandgirls.com.

Previews for Eclipsed begin on Tuesday, February 23, 2016, with opening night set for March 6, 2016 at the Golden Theatre (252 W. 45th Street).  For tickets and information, please visitwww.EclipsedBroadway.com. 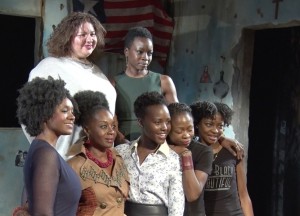 Set in Liberia, Danai Gurira’s Eclipsed comes to Broadway on the heels of its sold-out, critically acclaimed production at The Public Theater last fall.  Eclipsed stars Academy Award® winner Lupita Nyong’o joined by Pascale Armand, Akosua Busia, Zainab Jah and Saycon Sengbloh, and is directed by Liesl Tommy.  Eclipsed is the story of five extraordinary women brought together by upheaval in their homeland of Liberia. They forge a close-knit community… one that inspires them to feats of increasingly greater strength.

Producers Byrd and Jones-Harvey have become renowned for bringing non-traditional casting and stories to Broadway audiences such as the revivals of Romeo and Juliet, Cat on a Hot Tin Roof and A Streetcar Named Desire plus Cicely Tyson’s Tony® winning performance in The Trip to Bountiful.

The Eclipsed producing team also includes several members of the African American community who have distinguished themselves in the worlds of the arts, fashion, business, and beyond.  In addition to Byrd and Jones-Harvey, Eclipsed is produced by Kenny Ozoude, Willette Klausner, and popular actress and TV/radio personality Alani “LaLa” Anthony, among others. TV Producer Randolph Sturrup is onboard in association with the production and PR maven and film/theater producer Marvet Britto serves as associate producer

The BROADWAY EDUCATION ALLIANCE (BEA) is a New York based 501c3 not-for-profit organization formed to serve as a catalyst for collaboration between arts organizations and a platform for individuals who want to support new ways to make the performing arts more available, accessible, relevant and enriching to audiences of all ages. With a focus on arts education and audience enrichment, the organization endeavors to build partnerships between art makers and business or civic leaders to incubate programs and services that deliver long-term value in their communities. Small programs can become big opportunities and simple ideas can develop into transformative innovations when interested people get involved.    www.bealliance.org