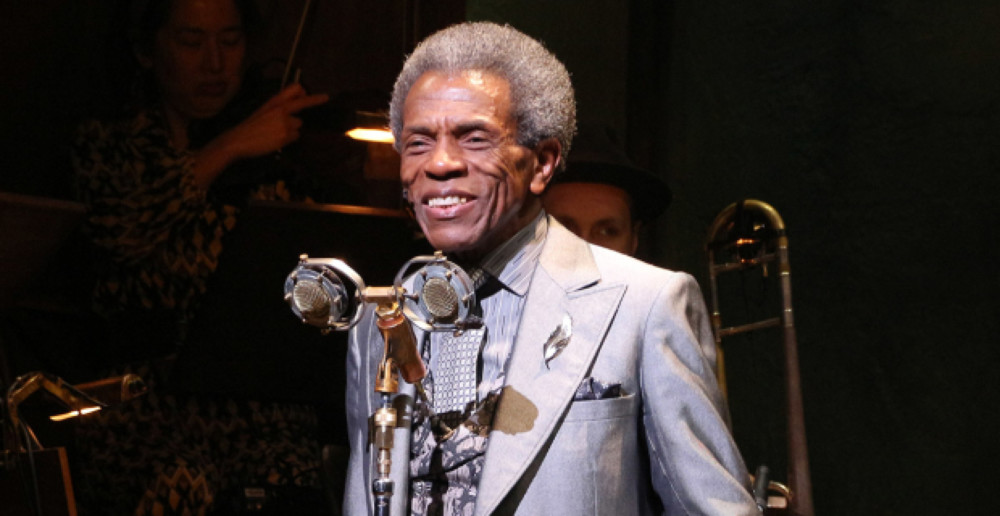 Tony winner André De Shields is an actor, singer, dancer, director, and choreographer. De Shields originated the role of Hermes on Broadway in Hadestown, winning the 2019 Tony Award for Best Featured Actor in a Musical and the 2020 Grammy Award for Best Musical Theater Album for his performance. He has also appeared on television, and won an Primetime Emmy Award for Outstanding Individual Achievement for his performance in the 1982 NBC broadcast of Ain’t Misbehavin‘.

De Shields began his professional career in the 1969 Chicago production of Hair, which led to a role in The Me Nobody Knows and participation in Chicago’s Organic Theater Company. He performed in a number of off off Broadway productions at La MaMa Experimental Theatre Club in the East Village of Manhattan during the 1970s, 1980s, and early 1990s. He co-wrote with Judith Cohen and directed a production of Chico Kasinoir’s The Adventures of Rhubarb: The Rock and Roll Rabbit in 1985 as well as a production of his own work, Saint Tous, to celebrate Black History Month at La MaMa in February 1991.

He made his Broadway debut as Xander in Stuart Gordon’s 1973 Warp! and next appeared in Paul Jabara’s 1973 Rachael Lily Rosenbloom (And Don’t You Ever Forget It), which closed during previews. He then appeared in the title role of The Wiz, directed by Geoffrey Holder.

In 1984, De Shields wrote, choreographed, directed, and starred in André De Shields’ Haarlem Nocturne, a Broadway musical revue featuring standards from the American songbook, pop hits from the early 1960s, and De Shields’ own songs. He appeared in a revival of Ain’t Misbehavin’ in 1988, and in 1997 as the Jester in Play On!, a musical based on Ellington’s songs. De Shields earned Tony and Drama Desk nominations for his performance.

In 2000, De Shields originated the role of Noah “Horse” T. Simmons in the Terrence McNally / David Yazbek musical adaptation of the film The Full Monty. De Shields again earned both Tony and Drama Desk nominations for this performance. In 2004, he appeared in the Broadway production of Mark Medoff’s Prymate. He received another Drama Desk nomination for his performance in Langston Hughes’ Black Nativity. In 2009, he appeared on Broadway opposite Joan Allen and Jeremy Irons in Impressionism.

In 2013, he portrayed Akela and King Louie in the world premiere of Mary Zimmerman’s adaptation of Rudyard Kipling’s The Jungle Book, a co-production of the Goodman Theatre and Huntington Theatre Company. De Shields received his 3rd Jeff Award (Outstanding Achievement in the category of Actor in a Supporting Role – Musical) for his role as King Louie, and garnered an Elliot Norton Awards nomination for Outstanding Musical Performance by an Actor as well as an IRNE Awards nomination for Best Supporting Actor – Musical.

De Shields portrayed Barrett Rude Sr. in The Fortress of Solitude and  starred in the new musical Gotta Dance

On television Another World, Cosby, Sex and the City, Great Performances, Lipstick Jungle, Law & Order, and Law & Order: Special Victims Unit. He won an Primetime Emmy Award for Outstanding Individual Achievement for his performance in the 1982 NBC broadcast of Ain’t Misbehavin’, and played Tweedledum in a 1983 televised production of Alice in Wonderland. Most recently, De Shields appeared in John Mulaney’s John Mulaney & the Sack Lunch Bunch in which he sang “Algebra Song!” The comedy/musical/variety special was released on Netflix on December 24, 2019.

André De Shields: I became a resident of Manhattan Plaza during the spring of 1997. After the death of my life partner due to A.I.D.S. related lymphoma. Having depleted all of my savings on his care, an appeal to the Actors Fund for assistance resulted in my moving into a studio apartment.

T2C: Were you in the building during the AIDS Crisis? How did that time frame affect you?

André De Shields: My initial three years benefitted from the final three years of the A.I.D.S. Initiative that was administered by Pastor Robert Stafford in the original space that bore the name Rodney Kirk Center (Tuesday luncheons and Thursday dinners). Stafford was assisted by the indefatigable Margie Roop, who is a longstanding resident in the 400 building. Sadly, even at the end of the 90s A.I.D.S. related deaths continued to be sufficiently frequent that my becoming a resident of Manhattan Plaza was made relatively uncomplicated. Many colleagues had succumbed to A.I.D.S. And when I wasn’t performing my eight shows a week, I was either comforting friends at St. Vincent’s Hospital, or helping them to die in their homes, or making telephone calls to a next of kin that a loved one had been lost. More often than not, that included explaining to a family member the seemingly impossible facts about opportunistic diseases and sexual orientation.

T2C: Has living in Manhattan Plaza changed you in anyway?

André De Shields: Yes, twenty-three years later, I am aware that when one embraces the tools of empathic creativity, shared community responsibility  and collective work ethics, then diversity, equity and inclusion can flourish in a context of aesthetic realism.

André De Shields: Living at Manhattan Plaza has allowed me to accomplish financial stability, while being encouraged by a community of neighbors who are personally invested in one another’s success.

T2C: What shows did you get while living in the building?

André De Shields: I performed in the following productions while living in Manhattan Plaza: Play On!, As the World Turns, Another World, The Full Monty, Dream on Monkey Mountain, King Lear, Caligula, Langston Hughes’ Black Nativity, Impressionism, Archbishop Supreme Tartuffe,The Bacchae, The Fortress of Solitude,1776, As You Like It, Mankind, Half Time and Hadestown.

André De Shields: My fondest memory of living in Manhattan Plaza is the lifelong commitment to the friendships that have blossomed here.

André De Shields: The biggest changes to the neighborhood are the disappearance of the Mom & Pop small business and the pedestrian traffic that now resembles the congestion of Times Square.

André De Shields: Living in the building makes me feel secure, and makes getting to work convenient.

André De Shields: The one thing I would change from my time living in Manhattan Plaza is the ability for a single individual–particularly a senior with financial means–to rent a one bedroom apartment. The stipulation that one may not seems a bit discriminatory.

André De Shields: I have lived an anointed life in spite of being H.I.V. positive for forty years.