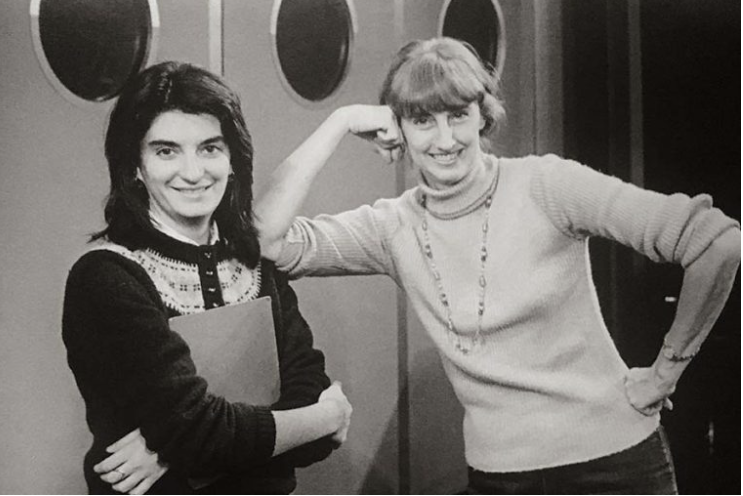 Carol Rosegg and Martha Swope on the set of A Day In Hollywood A Night in The Ukraine.

Martha Swope was the premiere photographer of theatre and dance. She was a student at the School of American Ballet in the 1950s. Her photography career started in 1957, when Jerome Robbins invited her to photograph rehearsals for West Side Story. Lincoln Kirstein hired her as the first official photographer for the New York City Ballet, where she photographed George Balanchine, Michael Bennett, Joe Papp and David Merrick. She was known for taking photos onstage while posed in the fourth position. She documented over 800 productions in her lifetime. To her, rehearsals were “where you see the creativity and the interchange, how it grows to what it comes to be onstage”.

She stopped taking photos when she retired in 1994, saying that “now I think it’s somebody else’s era”.

T2C talked to Carol Rosegg, Martha’s longtime assistant and photographer in her own right.

T2C: When did Martha first move into Manhattan Plaza and how did she get into the building?

Carol Rosegg: Martha has a apartment and a studio on 72nd Street. In 1980 she decided to move to Manhattan Plaza. They wooed her with a studio street level and a two bedroom in the 9th Ave building. She had to register her mother and her niece to get this. It was a great enhancement to live above the studio. Her living there was all do Richard Hunnings and Rodney Kirk. In her later years, she was taken care of.

T2C: What were her fondest memories of living in the plaza?

Carol Rosegg: She made many friends and it was a comforting place to live. She moved from her two bedroom, to a one bedroom after she retired. It was always wonderful for her.

T2C: Who were her favorite people to photograph?

Carol Rosegg: Dancers and then actors. She started as a ballet student at SAB and used to photograph her fellow students. A member of her class was Jerome Robbins. He asked her to photograph the rehearsals of West Side Story. They ended up in Life Magazine. She went on to photograph ABT, NYC Ballet, Martha Graham, The Dance Theatre of Harlem and many others.

T2C: What was her favorite photography moment?

Carol Rosegg: I don’t think she had one. Maybe George Balanchine. Mikhail Baryshnikov defected during this time and she shot him and they became friends. Michael Bennett and the beginning of Lincoln Center, I am sure was high on the list.

Carol Rosegg: Photography made huge changes. We went from B&W to color, then auto focus cameras. Martha never went to the digital change. In 1980 it was scary place. We were told on what streets to walk on. Café Madeleine was just a little hole in the wall coffee shop. With the Little Pie Company, the growth of the neighborhood was huge.

Carol Rosegg: The ease of it. There was no commuting.

T2C: How did living in the building make Martha feel?

Carol Rosegg: Very appreciated, taken care of. Rodney & Richard knew everybody and their needs. It was like they were one.

T2C: What should people know?

Carol Rosegg: Martha was a young girl from Wako, Texas with no connections and no skills. She quickly understood photography. She just picked up a camera she had taped together and started taking pictures of dancers. She was self-taught. Manhattan Plaza gave her a sigh of relief knowing she would taken care of.

T2C: Did she live through the AIDS Crisis?

Carol Rosegg: William Gibson who worked for her had AIDS. The theatre world was dropping like flies and we didn’t understand what was going on. William made it, he survived, but after the epidemic, he died. Martha photographed the original Off Broadway production of The Normal Heart at The Public Theatre.

T2C: What would you like us to know about Martha that we haven’t asked you?

Carol Rosegg: She was a big stray cat catcher, huge animal lover. She had a huge amount of stray cats and she would have them nurtured. I was paid to sit in the bathroom and comfort them. She also had stray dogs. One story was of a dog named Bert. He used to come to the studio, but he hated large instruments. One day, a Cello player came in and that was the end of Bert in the studio.

The studio ended in 1994. We were right next door to the Vitamin Store. The area was so unsafe, we built a cut out window inside of the window, as we were afraid. The rule was you don’t let them in, unless you know who they are.