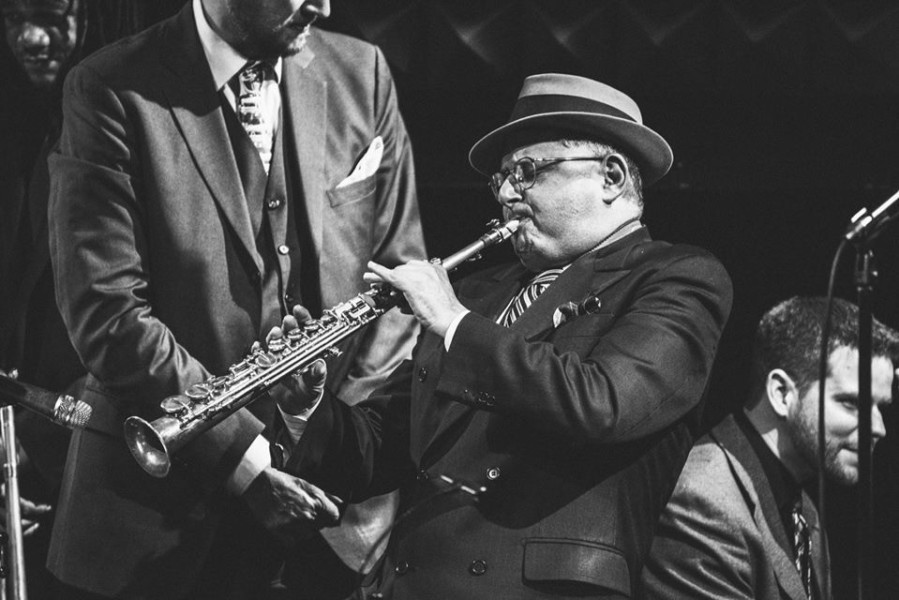 Michael Hashim has been a full-time performing and recording artist in New York City since 1979. Can we drop too many names of his employers, collaborators and teachers? They include Dizzy, Muddy Waters, Madeline Kahn, Art Spiegelman, Cab Calloway, Nancy Wilson, Phil Woods, Frank Foster, The Duke Ellington Orchestra, Mark Morris Company, The Artie Shaw Orchestra, Gatemouth Brown, Widespread Depression, and on and on and on.

His discography is large and available from some nut in Holland. It includes his Kurt Weill project with strings, two Billy Strayhorn discs, Microscopic Septet, Raymond Scott Orchestrette, The Flying Neutrinos, Devil Doll and a truckload more. Hashim toured China for the State Department, also North and South America, Japan, Western Europe, all the major Jazz festivals and clubs. He composed and performed for feature Hollywood movies, documentaries, PBS Playhouse and animated cartoons.

Michael Hashim: In 1985 I helped my life-long friend, the great pianist, organist, and bandleader Michael LeDonne move in on the 39th floor. I was the only one of his colleagues who showed up and his folks drove in with a truckload of furniture etc. The Plaza excited me as a near- ideal setting for urban living so Mike showed me the office, I signed up and got into a one-bedroom, with my wife, Katherine Bourbeau, editor and photographer in 1990.

Michael Hashim: I was in Manhattan, working as a musician and also doing some serious traveling. I was with people such as Martha Wilson of Franklin Furnace, Keith Haring, Karen Finley and more. It was scary and many groups and individuals including the gay population and POC were justly angry at being ignored, even persecuted, during a deadly plague.

Michael Hashim: I had plenty of friends at MP even before I moved in. Many of my best buddies have passed on: Harold Ashby, Irvin Stokes, Frank Lowe, Ray Mantilla, Lawrence Lucie, Frank Vicari, Paul Garment and Bobby Watson and Joey Baron and Phillip Johnston moved away. I have loads of friends and colleagues in both towers and am squeamish about listing them for fear of grievous addle-pated omissions!

T2C: Has the building inspired you to create new jazz pieces?

Michael Hashim: The overcrowding, both pedestrians and vehicles, is the most noticeable change in general. For me as a musician it is the loss of most of the rehearsal and recording studios, coupled with the nearly complete disappearance of the retail “music quarter” of 46th-48th St. between 6th and 8th Avenues.

Michael Hashim: It was the key factor in allowing us to raise our brilliant beautiful daughter, Regina, in midtown, in a secure, pleasant, and stimulating atmosphere.

Michael Hashim: I don’t mean to look at that question from a negative perspective but the Plaza has allowed me not to have a teaching job if I din’t want one. At times this has freed me, either to pursue artistic goals or arrange the complex practicalities of a performing career.

Michael Hashim: I would have put more effort into avoiding the high prices at Food Emporium!

Michael Hashim: Impossible to answer since I have had a rich, deep, endlessly changing romance with Manhattan Island since I was 5 years old. But watching my daughter’s birth at Roosevelt Hospital on 10th Ave tops the list.

Michael Hashim: I would like your readers to know that MP functions as well as it does thanks hugely to the wonderful staff. So kudos to all departments for making it happen!

Suzanna BowlingAugust 10, 2022
Read More
Scroll for more
Tap
What To Watch April 17th To Take Away The Blues
The Glorious Corner