Desperate Measures started previews at New World Stages thanks to producers Pat Addiss and Mary Cossette. With book and lyrics by Peter Kellogg (Anna Karenina) and music by David Friedman (Scandalous), this terrific show is directed and choreographed by Bill Castellino (Marry Harry, Cagney), with music direction by David Hancock Turner (The World Will Not Contain Us). 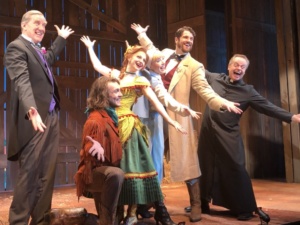 The cast of Deseperate Measures

In this video get to know the villian of the piece. This former President of the Actors’ Equity Association Nick is a hilarious as the Donald Trump of his time. With 14 Broadway shows to his credit Wyman starred as Freddy in the 1981 revival of My Fair Lady with the original Higgins, Sir Rex Harrison. Wyman later created the role of Firmin in the Broadway production of The Phantom of the Opera. Now you can catch him lighting up the stage in  Desperate Measures.

Suzanna BowlingJanuary 12, 2022
Read More
Scroll for more
Tap
2018 Tony Nominee Luncheon and You Are There
The Boys in the Band are Playing One Angry Tune, Smashingly