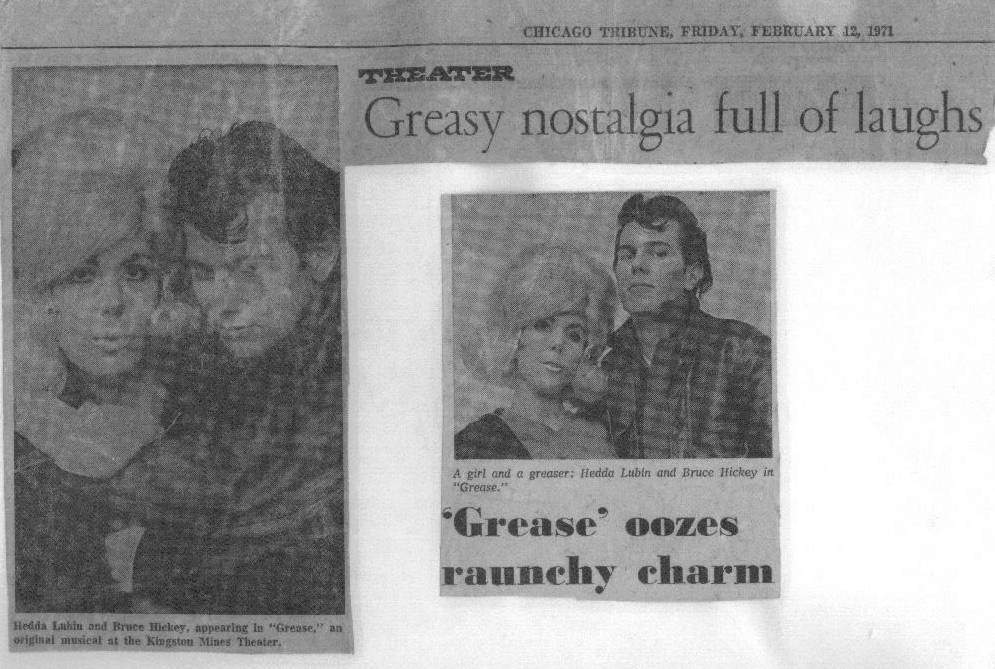 Meet the Playwrights of Summerfest: Bruce Hickey The Original Danny Zuko From Grease

Meet the Playwrights of Summerfest: Bruce Hickey The Original Danny Zuko From Grease 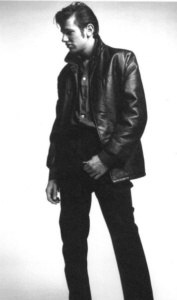 Bruce Hickey, is a writer and director. Currently, his dramatic play Last Call has been honored with a short developmental run at The Hudson Guild Theater Summerfest in NYC. Living in Los Angeles, he started his career as an actor in the Chicago theater scene, where I played Danny Zuko in the original production of Grease. Though I have spent forty years in the theater, Last Call is his first full-length play to be performed in New York. 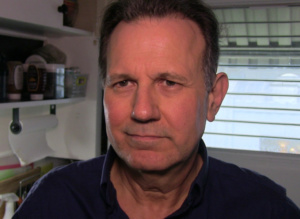 Raised in Chicago at eighteen, I was lucky enough to be part of the original cast of Grease. I was initially cast as Kenickie Murdoch, but was soon promoted to play Danny Zuko – the character Johnnie Travolta would later cast in gold.  Amazing crowds would come to see our show; one night, we put on a special show for Dick Clark, who was considering producing the play in New York. After the show, Warren Casey, the co- writer of Grease, nervously announced him to the dressing room by saying, “Hey everybody, this is Dick.” Perhaps still in character, I shot Clark a cool glance and said, “Yeah, Dick who?” Silence. Warren was aghast, white as a sheet; finally, Dick Clark let loose a laugh. The tension deflated. We had a good time that night. One night after the show, a young guy smoking a cigarette came up and said my performance was so authentic, it reminded him of a cousin of his in Melrose Park. He shook my hand and introduced himself as John Belushi. He invited me to see him perform at Second City. I remember telling him after his show, “Man, you are more than funny. I saw a great actor up there. You should be doing plays, ‘cuz you really got it.” Soon after, he moved East, became famous at SNL. 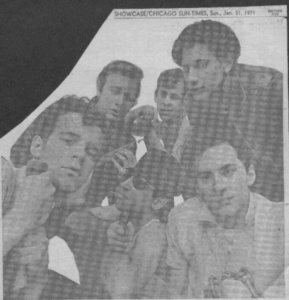 Our cast in the Chicago Sun Times

My first trip to New York City was to audition for Grease at The Eden Theater. I waited in the bitter December cold, exhausted and congested and frigid; no way I could sing or dance well enough for a slick Broadway show. I never had a chance. I will always be indebted to Jim Jacobs and the late Warren Casey for giving a scrappy kid from Chicago the chance to be in their play. 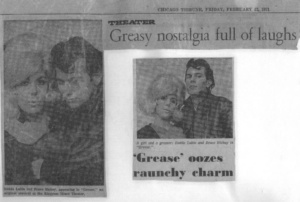 After Grease I performed in a few more Chicago-produced plays, but found myself  wanting to do more. Eventually, I directed an adaptation of Hatful of Rain. I took liberties; I made the lead a Vietnam vet, instead of Korea. I cut and trimmed and tweaked it as if it were my own writing. (Sorry, Michael Gazzo.) It worked; we got wonderful reviews. I was hooked.

To make a living and pay for my theater addiction, I bartended and held a caseworker job in Chicago. I witnessed first-hand the problems faced by urban American families, and the effect drug abuse was having on urban families. America is finally waking up to what is called “the Opioid Crisis”, but the seeds of this crisis were buried and growing even in 1977. I wrote a play about a family I’d met, called All I Want. We opened at The Victory Gardens Theater in Chicago and received rave reviews. All I Want won Best Play, Best Direction, and Best Set at the Jeff Awards – the Chicago equivalent of the Tonys. After the play closed, ABC did an hour-long Emmy nominated documentary called Bruce Hickey’s Uptown, about myself, the play, and the neighborhood I wrote about.  All I Want ran for over two years and spawned a sequel, Some Kind Of Live, which played in repertory for six months.

In LA I directed Sam Shepard’s Fool For Love at LA’s Studio Ensemble Theater, where Sam Shepard’s sister stated “I’ve seen this play in San Francisco, New York City with Ed Harris, and well, every big production of it. And it wasn’t until seeing your version did I realize the play was about my relationship with Sam.” Wow, that blew me away.

I’ve written movie scripts, bartended to make a living, and kept dreaming. In the late 80s I wrote and directed a horror movie, which shot in NYC. I wrote some TV movies for Hollywood, including a version of William Inge’s play Picnic for CBS, starring Josh Brolin. Even then, I always had theater on my mind.

In 2015 I wrote and directed  the pilot to Blindsided By Love. So far, it has won four film festivals. My screenplay The Hot Mess, is getting made, me directing it. We shoot early 2018, in Palm Springs.

Last Call,  is set in a bar. Meet Sherri, an alluring, cunning lawyer who is currently dating Phil, the neurotic CFO of the firm. Sherri had a past relationship with Marty; the slick, GQ- ready creative force of the company, and Phil’s best friend. These three plan to launch a daring, cut-throat online venture; but when confronted with their pasts at gunpoint, their romantic entanglements muddy up the waters — business and personal lines are crossed. And they learn that nobody can be counted on to be loyal. 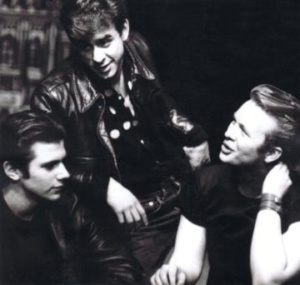 This Danny Zuko makes a mean Manhattan, but still wants a shot at The Big Apple.