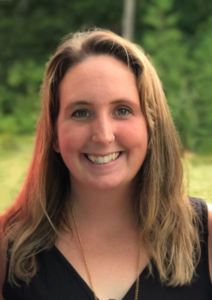 Cait Lang has been working in theater in NYC for the last nine years. From production/stage managing large off-Broadway musicals, to working monthly one night off-off Broadway variety shows, she has loved bringing to life others’ words. While working on shows from Romulus Linney’s Love Drunk to Vivien Goldman & August Darnell’s Cherchez La Femme, Cait has actively continued to write and edit her own scripts.

Cait Lang wrote this particular short five years ago. Between giving birth to her own children, Cait has breathed various forms of life into this piece. She has expanded it to both an one act and a full television series. The latter has been a project she has been working on with her writing partner, and brother, Tyler Ferreira. With a fully registered pilot, Cait and Tyler are currently working on stage and film adaptations.
For Winterfest, Cait has chosen to not only write, but also direct and produce on her own. This has been a step out of the norm for her, who has built a career on managing productions. She is so excited to finally bring this story to the stage and could not have done it without the support from her family, friends, and theatre community.
Our Last Ten Minutes follows a woman coming to terms with a life changing decision. She goes to find the one other person who she feels comfortable with. Through dialogue, self discovery, and moments of truth, Our Last Ten Minutes brings the audience through an uncomfortable, relatable, and raw moment in life.
Related ItemsCait LangNewOur Last Ten MinutesTyler FerreiraWinterfest
Off Broadway

Bringing The Music of The 90’s Back Cruel Intentions: The Musical
Project Shaw Presents The Devil’s Disciple And You Are There