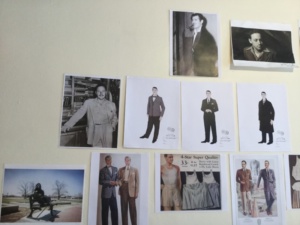 Costume sketches for the two men

Although now regarded as two of history’s finest American playwrights, back in 1944, William Inge and Tennessee Williams hadn’t yet experienced anything close to success. The Gentleman Called takes us back in time, before the Chicago premiere of The Glass Menagerie. Inge, a dissatisfied newspaper critic, invites Williams to his St. Louis apartment for an interview. This sexy, fraught rendezvous sparks a relationship, which radically alters the course of their lives and the American Theatre.

The Gentleman Caller features a scenic design by Sara C. Walsh (Queen of the Night), costume design by Hunter Kaczorowski (The Dork Knight ), lighting design by Zach Blane (Too Much, Too Much, Too Many), and sound design and original music by Christian Frederickson (Antigone, Trojan Women). 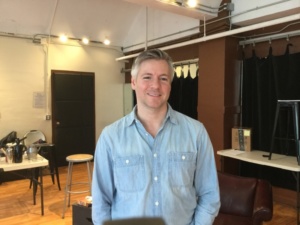 “The struggle to create while not also destroying the self in the process is one that is, I feel, as vital today as it was in the smack-middle of the last century,” says playwright Philip Dawkins. “Tennessee Williams and William Inge have both been such major influences not only to me but to so many others who I count as my mentors and theater-heroes. As a Midwestern playwright myself, I take the responsibility of holding these powerful queer voices from the middle of America as a great and powerful honor. Delving into their lives has been a wonderful and terrifying adventure, and I’m thrilled to continue this adventure with Tony Speciale and Abingdon.”

“It is an honor to be able to include Philip Dawkins’ searing new memory play, The Gentleman Caller, in Abingdon’s 25th Anniversary Season,” says Speciale. “Tennessee Williams has long been one of my favorite playwrights. His manifesto on ‘plastic theatre’ continues to be a guiding principle in my own work as a theatre-maker. In true Williams fashion, Dawkins has written a mythic boxing match between these two great artists, as well as a love letter to the genre they both adored: the theatre.”

The Gentleman Caller plays May 5 through May 26 at the Cherry Lane Theatre (38 Commerce Street, NYC). Opening night is May 10 at 7PM. Performances are Mondays at 7PM, Tuesdays – Saturdays at 8PM, with matinees Saturday at 3PM. There is an additional 3PM matinee on Wednesday, May 9. Tickets are $65 and available atabingdontheatre.org or by calling 212-352-3101. Premium seating is available. For more information about The Gentleman Caller, season subscriptions and group bookings visit abingdontheatre.org or call 212-868-2055.