Vivian Reed, is a two-time Tony Award-nominated Broadway star and concert artist, She continues to honor the icon Lena Horne in a special centennial celebration at Feinstein’s / 54 Below. For two more shows — February 7 and March 7 — Reed offers high-energy, fearless renditions of Lena classics such as “Stormy Weather,” “The Lady is a Tramp,” “A Fine Romance,” “I’ve Grown Accustomed to His Face” and “On A Wonderful Day Like Today.” She is accompanied by an all-star quartet featuring Conductor William Foster McDaniel on piano, Calvin Jones on bass, Damon DueWhite on drums and Don Tipton on guitar. Earlier this season, Vivian received the Mabel Mercer Award from the Mabel Mercer Foundation at Jazz at Lincoln Center. The evening honoring Lena Horne received rave reviews when it was introduced to New York earlier this season. When the show premiered in Pittsburgh earlier this year, the Pittsburgh Courier raved “full of sass, jazz, soul and a deep down homegirl style, Reed has a unique ability to take her fans back to the time when music told a story of love, pain, strength and joy. Taking the stage in true star power, Reed took on an in-depth glimpse into the life of Horne.” 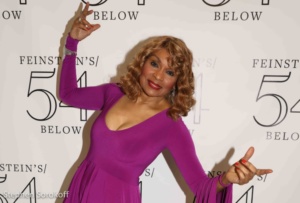 Vivian’s recent album “Standards and More” — available on iTunes, Amazon and CD Baby — includes unique arrangements of eternal standards by Billy Strayhorn (“Take the A Train”), Rodgers & Hart (“My Funny Valentine”) and Cole Porter (“Just One of Those Things”) in a dazzling blend of pop, jazz, soul and R&B.

Reed  earned two Tony Award nominations, the Drama Desk Award, Theatre World Award, Outer Critics Circle Award, the NAACP Award and several others.  When Vivian originally took New York by storm in the original Broadway production of Bubbling Brown Sugar. In the show she introduced her fiery rendition of “God Bless the Child,” which has since become her signature show-stopper. Vivian subsequently starred in the show in Los Angeles and then led the world tour through England, Germany, Switzerland, Holland, Italy, France and beyond.

Her national TV appearances include “The Tonight Show,” “The Today Show” and the ABC daytime drama “One Life to Live.”  She has shared the bill with notable performers such as Patti Labelle, Brian Stokes Mitchell, Audra McDonald, Elaine Stritch, Alan King, Sammy Davis Jr., Quincy Jones, Ashford & Simpson and Charles Aznavour.  Her film credits include Heading for Broadway, L’Africain with Catherine Deneuve and La Rumba, in which she portrayed Josephine Baker. Recently she produced and starred in the short film What Goes Around, written by Straight Outta Compton star Angela Gibbs. She captured the attention of Pierre Cardin, who booked Vivian into his theater which led to her first European TV special. She was invited by the Prince and Princess of Monaco to sing in Monte Carlo and later performed at the Top Fashion Designers Gala at the Théâtre des Champs Elysées and the American Film Festival in Deauville. She has been featured in magazines such as Vogue, Elle, Time, Paris Match, People, Ebony and a cover profile in Jet.

Vivian’s most recent Broadway appearance was opposite Audra McDonald in Michael John LaChiusa’s Marie Christine at Lincoln Center Theatre, which was nominated for six Tony Awards. She received critical acclaim in major productions of Sophisticated Ladies, Roar of the Greasepaint, Smell of the Crowd, Blues in the Night, High Rollers, Show Boat and Tintypes. Her recent plays include Blues for an Alabama Sky, Pork Pie and Cookin’ at the Cookery. She also portrayed Lena Horne in More Than A Song with the Pittsburgh Ballet Company, directed by Lynne Taylor-Corbett.  Vivian appeared at the Lena Horne Awards honoring Rosie O’Donnell and Quincy Jones at the Ford Center in New York.  She appeared in Three Mo’ Divas at the San Diego Rep and Arena Stage in Washington, DC and received critical acclaim for her dramatic portrayal in The Second Tosca. She is currently wowing them in the York Theatre’s Musical in MUFTI Hallelujah Baby.

Hear Vivian get personal in this video.

Fire and Air Terrence McNally‘s Excruciating Heaviness of Being
He Brought Her Heart Back In A Box: 45 Minutes of Lyrical Racial Divide