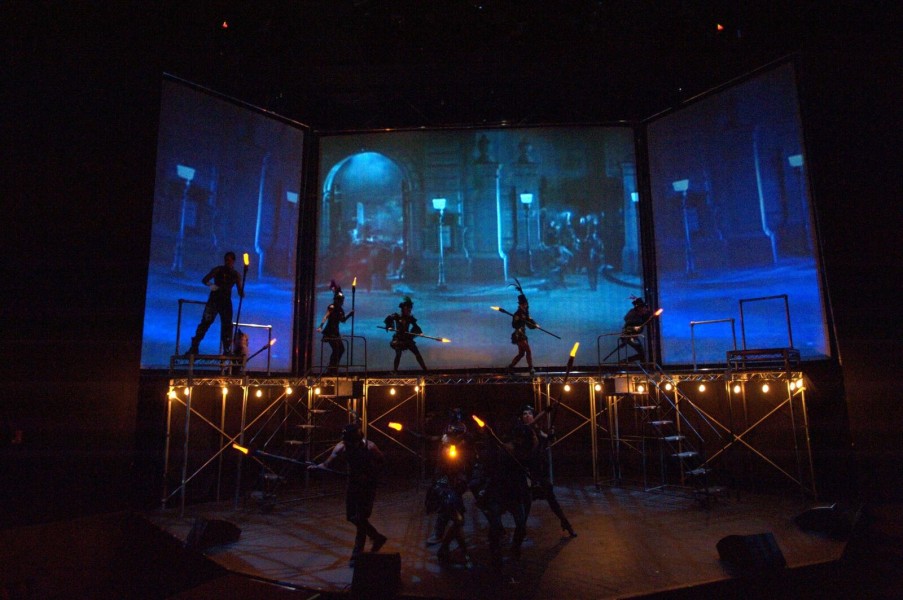 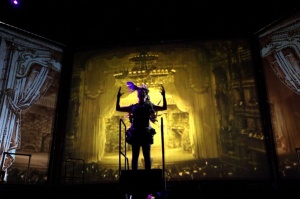 Kevin Saunders Hayes is an award-winning composer, songwriter, conductor, orchestrator, arranger and producer. Together with his team he is bringing a new form of theatre to the Daryl Roth Theater

T2C: What had been some of your career highlights 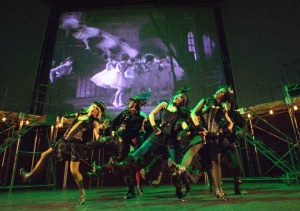 Kevin Saunders Hayes: I have been so blessed to make my living creating music. I love to create art. When I first came to New York I made my living creating jingles. Volve M&M’s Underroos paid the bills. I did a few feature films as a ghost writer and two documentaries, one on Rosa Parks and the other for HIV.

T2C: How did Vox Lumiere come about? 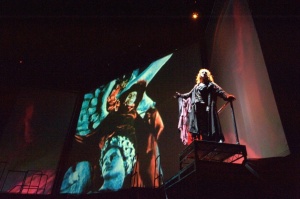 Kevin Saunders Hayes: I was broke, but needed underwear. I was making the world safe one jingle at a time. I was doing shows producing them myself and if we broke even, it was a success. I went to the store to buy underwear with only five dollars to spend. In a box were silent movies for $1. Instead of underwear I bought Hunchback of Notre Dame, Phantom of the Opera, Metropolis, Lost World and The Cabinet of Dr. Cagliari. Stunned at how beautiful these movies were, I saw how they could be three dimensional. I saw the potential and how to meld these two worlds together.

Vox Lumiere has played ten plus years. For the first five we didn’t even know what we were doing. It was a lot of festivals. 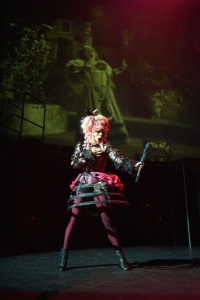 T2C: Vox Lumiere’s has been described as steam-punk-inspired. Can you go more into that? 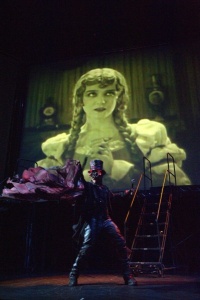 Kevin Saunders Hayes: That was just one production. We currently have five shows and two in development. We try to bridge the gap between the centuries. The whole world has a connection with Phantom of the Opera. There is a cool genre in science fiction. With our Hunchback the theme is more goth and punk rock. In Peter Pan we gave it a 60’s sci-fi look. We are looking for a connection with the people on the screen.

Each show has been different.

T2C: Is there speaking? 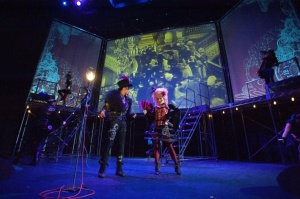 Kevin Saunders Hayes: No it is almost like an opera, it is sung through. There are slits in the screens and the two worlds intersect. There is no talking, no spoken word, everything is sung.

In previous production we had 30 -4o choir members and a cast of four singers. In New York we will have seven singers and seven dancers.

We have provided the opportunity for high schools and local choirs to become a part of our productions.

T2C: What is your hope for the New York production? 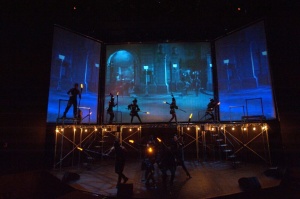 Kevin Saunders Hayes: My hope for the New York production is that we have a fan base and they are in love with the production. We hope the response will be the same here and they will have the same reaction. We want to be like Cirque du Solei and play for the next ten to twenty years. Nobody has told stories like Vox Lumiere has created. This is a riveting new kind of storytelling that is so much more than just a show. It tears down the walls between the stage and screen.

T2C: Why the Phantom?

Kevin Saunders Hayes: Because it connects to your emotions and your heart. You do not need to know English for it to touch you.

T2C: How did the Daryl Roth Theatre become involved?

Kevin Saunders Hayes: We decided a year ago it was time to go to New York. We are pioneers of this art form. We needed a team and found a great team to work with. We looked at warehouses and other cool spaces. We walked past the Daryl Roth Theatre and thought this is where the show needs to be. Daryl produces a lot of shows so I sent her a letter. She responded by saying, “Kevin come and talk me about my theatre.” We talked and I was invited to see the show and then I saw the theatre without the show. I knew this was it. We were offered the contract on the theatre. Part of the magic of the theatre is it is a huge black box and you can come and create the world. Our show takes a space that can be creative Daryl saw the magic.

T2C: Are there more shows to be written?

Kevin Saunders Hayes: I have ideas for two new shows. I want to do Zoro where the main language is in Spanish. Also The Cabinet of Dr. Cagliari and Nostrafau.

T2C: Do you still do jingles and film?

Kevin Saunders Hayes: I still do film work and I have a couple of short films. Begrudgingly, I’ve had to say no to a couple of things. The jiggle business has changed with branding, so not much original music is used anymore.

T2C: What will we experience at Vox Lumiere?

Kevin Saunders Hayes: When you come to the show the film has already started. There is lots of interaction. Not everybody will have the same experience as they meet, greet and party. We create characters that are not in the film. They relate to the film. The lines are blurred and you will either think the real people were in the film or the characters in the film where live on stage. We give you permission to have fun with us. The diffence of the show is it’s an event. People love these stories, its proven because we keep telling these stories.

T2C: What is your favorite song styling to write in?

Kevin Saunders Hayes: Mash-up’s, pop, rock, edm, classical, disco, all originals. I have so many favorites, after I write in one style, I get to play with all these other parts of me.

T2C: What would you like people to know about you?

Kevin Saunders Hayes: That I’m happy to talk about my baby.

Vox Lumiere opens up at the Daryl Roth Theatre January 16, 2017.