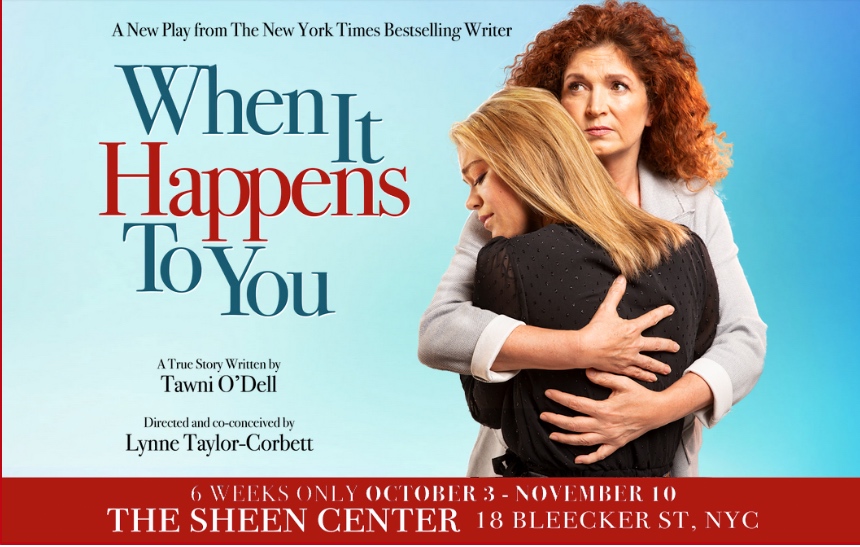 “The first time I held my daughter after she was born I made a silent promise to her I would always protect her.” – Tawni O’Dell.

Writer Tawni O’Dell is known for her novels Back Roads, which she recently adapted for the screen, as well as Coal Run and Sister Mine. She is now taking to the stage with When It Happens to You, a play based on her own experiences grappling with her daughter sexual assault and the impact it has had.

“Then came a night in our future when that promise was shattered. I couldn’t protect her from the man who stalked her through the streets of her beloved New York City, broke into her home, and assaulted her,” O’Dell explains. “During the next few years, her life fell apart and so did my own as I tried to help her deal with the fallout from this awful crime. As a way to help make sense of what we were going through, I did what writers do: I wrote about it. Rape touches just about every one of us. More women are sexually assaulted in this country than are affected by heart disease and breast cancer combined. To say it is an epidemic is not hyperbole.”

T2C talked to this mother/writer and women who has a lot to share.

T2C: Your daughter was the victim of a brutal attack. How is she now?

Tawni O’Dell: She is doing fine. Rape victims seem fine on the surface, its been almost six years. She is a chef, has an apartment, but underneath the surface she is still struggling with PTSD and panic attacks. She will thinks she sees the man who raped her. She becomes irrational, it’s heartbreaking.  I am the only person who she talks to. It becomes difficult for me and I get depressed being the one person who is there for her. She bought her first new car. She is still depressed and can not form relationships with other people. She’s lonely. She has lost her self worth and she hates herself. As a mother this is the worst thinging in the world.

T2C: Did she give you permission to write her story?

Tawni O’Dell: What happened is I wrote the story first. I was depressed, so I needed to write. I thought maybe if I wrote this down this will help me to see it and share it with her. If she sees herself as a character, maybe she could survive and maybe this could help her like herself a little bit better. I shared it with a few people who told me this would help other people and then I showed it to my daughter. She was emotional. She asked me if I want to publish it. She told me “I would want to read this.” It was sweet and brave of her. I am hoping this will be positive for her. Most rape victims do not share.

T2C: What happened to her abuser?

Tawni O’Dell: He was put away in jail for 18 years. At the trial he hgave this heart-wrenching apology. He was on drugs and he cried. He kept saying I am sorry. He did choose to make a statement. He had never been in trouble with the law, but that doesn’t excuse it.

T2C: How did this affect your family?

Tawni O’Dell: My son, who is 3 years younger than his sister, was at home from college break. I don’t know if I would told him if he wasn’t at home. He’s a brother, he’s a man, he has to be tough, he worries about his sister a lot.

I was so angry, that you get angry with the world. You lost your child. She is not there any more. It is a loss. It broke us up. It’s private.

T2C: What issues did it bring up for you?

Tawni O’Dell: It made me hate men. It’s too strong of a word, but I had no tolerance for men, including the men in my life, except my son. Then I did an about face and went online and met the man I live with now. This caused a riff between my daughter and me. It gave us something to fight about instead of dealing with the real issue. She turned to alcohol and has beat it.

T2C: What do you wish to accomplish by telling this story?

Tawni O’Dell: I want to help victims. I can’t watch an episode of Law and Order since this happened. Victims are not going to be flocking to this show. I am hoping that it is OK to be open about it. Rape victims blame themselves. They did nothing wrong but they live in fear. In a broader sense, it’s about anyone who has had to go through anything bad in life. There are support systems out there. I want people to call their friends and family and say “I am here for you.”

T2C: How has your daughter handled seeing her life on stage?

Tawni O’Dell: Her best friend and her will be at opening night and she may not be able to handle it, but they feel it is worth the risk.

T2C: What made you choose this title? Molly Ringwald’s novel is called that.

Tawni O’Dell: I had no idea about that. I chose the title in ignorance because it happens to so many women. It can happen to you in any minute. This gives guidelines of when it happens to you. Here is how to cope.

T2C: You are starring in this piece? Why? Were you an actress?

Tawni O’Dell: I have never been on stage in my life. I have done many speaking events with audiences. The reason we decided to do it this way is it is my story. That is what gives it the power. People can say “this women had it actually happen to her”. I think that’s unique. I also feel protective of the material. If I put this out in the world, I need to keep it real.

T2C: What would you like our readers to know?

Tawni O’Dell: I want them to know that even though this is dealing with dark matter, it is not a play about rape, but a play about how a parent deals with the ripple effects. This play has a lot of humor and love. You’ll walk out feeling broken and battered over what happened, but hopeful. Its an emotional rollercoaster. It is not a complete downer. It is surviving and moving forward.

The world premiere is directed by co-conceiver and Tony nominee Lynne Taylor-Corbett.

Performances run through November 10 at Off-Broadway’s Sheen Center for Thought and Culture.  Opening night is set for October 13.

Suzanna BowlingApril 16, 2021
Read More
Scroll for more
Tap
He Says: ATC’s Sunday on a Saturday with the PH’s Heroes of the Fourth Turning Proudly Shooting in from Above
He Says: Belting and Chasing Rainbows Center Stage at the Paper Mill Playhouse