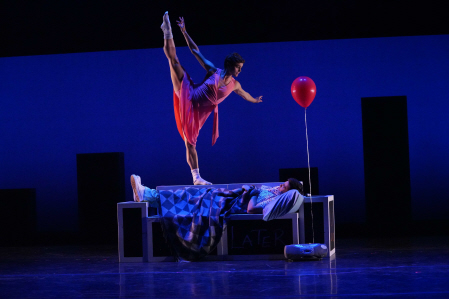 Al Blackstone’s choreography for Freddie Falls in Love, is in a word… joyous. His dancers are fluid and with strong balletic influences. They perform like regular people in sneakers, who break into dance just for the heck of it. The soundtrack of this world is jukebox classics. Blackstone is well known for his work on So You Think You Can Dance and boy can they.

Freddie Falls in Love, is a full-length dance narrative originally staged as a four night sold out benefit for Dancers Responding to AIDS.

The story follows a young man (Matt Doyle), who is encouraged by his best friend (Betty Weinberger), while sitting in the park, to ask a girl (the fabulous Melanie Moore) out on a date. The pair hit it off, until the boy’s proposal scares the girl away. The boy is heartbroken, so his friend (Evan Kasprzak) try to cheer him up. He has one encounter with a Tiare Keeno, but his mind is on Melanie, then he connects with Lindsay Janisse, but blows it. He ends up going to Paris, where he meets another girl (Chantelle Good). At a clubs the androgynous sexual Kolton Krouse almost steals the show. Eventually the boy and girl get back together but ironically, the shows title has nothing to do with these two, but his two best friends. Freddie is actually the name of the female best friend.

Though-out the show a hysterical Ashley Day walks around with a bird-puppet whose animated communication and magical presence is so large that he captures our attention and our hearts.

Standout moments feature Melanie Moore whose fluidity, acrobatic balletic moves and emotional connection to the material is visually stunning. Kolton Krouse will blow your mind as the lead dancer in a Parisian nightclub. This boy has moves, an exuberance paired with a mischievous smile. You can’t take your eyes off him. Evan Kasprzak’s tap dancing and limber moves will also thrill. This entire cast each has their own moments to shine.

Dan Kelly’s cover of Prince’s ‘Nothing Compares 2 U is the theme, but music from Jacques Brel, Tommy Dorsey, Bobby Darin, Marlene Dietrich, Fiona Apple, Frankie Lymon and the Teenagers, Frank Sinatra and more are the soundtrack for this delightful evening of dance that will have your leaving the theatre satisfied.