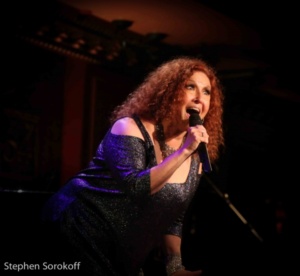 Grammy Award-winning singer/songwriter Melissa Manchester returned to Feinstein’s/54 Below for four performances and T2C was there to capture the magic of Manchester’s earthy pop vocals. Aided by famed musician John McDaniels on keyboards and Susan Holder on percussion, both added vocal harmony. Sparkling in an all black ensemble, the audience was given a glimpse into Ms. Manchester’s illustrious career. We were sent back to the 1980’s and a career that spans more than four decades. Letting us know she was thrilled to be at Feinstein’s/54 Below, we were treated to Cole Porter’s “I Happen To Like New York,” done with a  soulful, melodic twist. 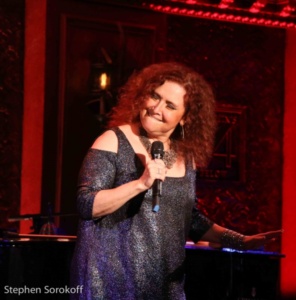 Manchester sings power ballads like nobody else. Her vocal chops opened up with “Open My Heart to Your Love,” which she cowrote with Michael Hunter Ochs. This song was heartfelt and uplifting, which pretty much describes Ms. Manchester’s attitude to life. She is infectious. 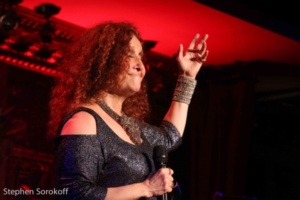 Paying tribute to the late great Marvin Hamlisch and her co-hort Carole Bayer Sager, the theme song to the 1978 movie Ice Castles, accompanied by film clips brought us back to when Robby Benson was a teen heart throb.

From her newest album due out later this year, Ms. Manchester brought out a jazzy “Love Is Just Around the Corner.” This soulful scatting arrangement made me want to own this CD, as soon as it is available.

On a fan’s suggestion following a live performance of the 50-year old Ronettes classic, “Be My Baby” was reinvented as a slow pop lullaby, sung tenderly as faces of young children from an unwed mother’s charity she is giving her time to, appeared.

“Midnight Blue” was a Top Ten hit single by Melissa and her first collaboration with Carole Bayer Sager in 1973. As Melissa took to the piano, I realized her music is timeless with the gift of bringing the past back to life.

My favorite two pieces of the night started with a spiritual jazz duet with Al Jarreau, called “Big Light” and  “That One Kiss” from Sweet Potato Queens.  Sweet Potato Queens (SPQ) is loosely based on the life story of New York Times best-selling author and SPQ founder, Jill Conner Browne. This new musical about a women’s organization based in Jackson, MS, that has 6,200 chapters in 37 countries. It involves a belief in “a sisterhood that promotes self-esteem and positive thinking, appealing to mostly middle-aged middle-class women. Each local chapter assumes its own theme and designs its own costumes. It recently received a  staged reading at TUTS in Houston, Texas. The musical is being developed in partnership with Grammy Award-winning singer/songwriter Melissa Manchester (music), Oscar nominee and Nashville Songwriters Hall of Fame inductee Sharon Vaughn (lyrics) and Tony Award winner Rupert Holmes (book). Stayed tuned as T2C finds out more about this new up ad coming musical.

Back to the hit songs “You Should Hear How She Talks About You,” was written by Tom Snow and Dean Pitchford. Melissa talked about how she had to cut her hair, get down to a size 4 off, get glammed up get that Grammy.

“Whenever I Call You ‘Friend” was written with Kenny Loggins in 1978 and is still popular today, the whole audience joined in and brought out every singer in the room, including my guest who never sings.

From the 1979 film The Promise, “I’ll Never Say Goodbye,” resulted in Melissa Manchester becoming the first artist to have two movie themes songs nominated for Best Original Song in the same year. The Oscar went to David Shire (music) and Norman Gimbel (lyrics) for “It Goes Like It Goes’ from Norma Rae, but it is Melissa’s songs that make us remember romance and gentler time.

It was thrilling to see Melissa paying tribute to Barry Manilow. Manilow discovered her vocal talents and introduced her to Bette Midler. In 1971 she became a member of the Harlettes, the back-up singers for Midler.

“Don’t Cry Out Loud” was written in 1976 by Peter Allen with lyricist Carole Bayer Sager that every singer sang for the longest time. The original version was changed by Clive Davis and what you heard was Melissa’s rage. I never was a huge fan of the song, but last night when sung as a hear wrenching ballad I was surprised I actually now liked the hit song. Now I know why.

“You Gotta Love the Life”, is a collaboration with the late Hal David, who wrote the lyric. This song is the essence of Melissa’s philosophy on 40 years of making music.

Melissa Manchester is confident, personable and a storyteller whose music was the soundtrack to an entire generation. Despite time and a more limited register Ms. Manchester still has that amazing belt and knows how to put across a song. Melissa is a singers singer and is a master class in song interpretation. I look forward to her next appearance, learning more about her new musical and getting my hands on her newest CD.