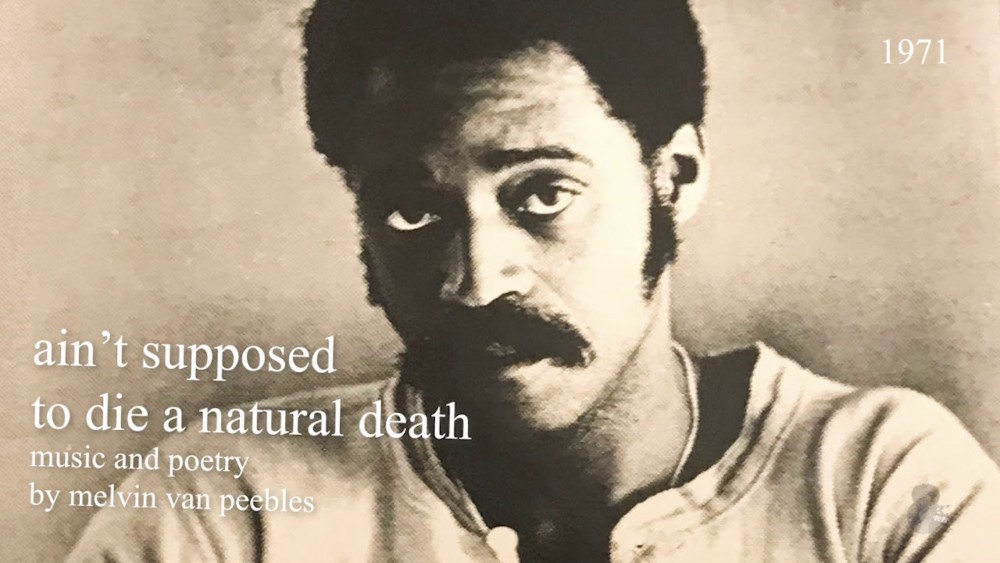 Featuring a book and score by Mr. Van Peebles, Ain’t Supposed to Die a Natural Death blends early hip hop and spoken word, jazz and blues, humor and pain to offer a raucous celebration of – and clear-eyed look at – America.

On October 20, 1971, Ain’t Supposed to Die a Natural Death had its legendary opening night and perfectly captured the Van Peebles zeitgeist as it stunned its first Broadway audiences  with its heightened, no-holds-barred depiction – equal parts thrilling and intense – of the largely unseen corridors of urban life.  Broadway – and popular music – would never be the same.

“The songs on stage were mirroring the incidents that were happening in the streets,” said Van Peebles. The introduction of Van Peebles’ unique songwriting style to Broadway marked a turning point in the American musical artform, serving as a major influence for future Broadway sensations, including Bring in ‘da Noise, Bring in ‘da Funk; Rent; and many more.

Ain’t Supposed to Die a Natural Death went on to earn seven 1972 Tony Award nominations, including Best Musical, Best Book of a Musical, and Best Original Score. Given an unprecedented (and unrepeated) more-than nine-minute performance slot on that year’s Tony Awards telecast, the original cast delivered what Time Out New York later called, “The most shocking performance in the history of the Tonys.” Its now-iconic score, steeped in funk, soul, jazz, and blues, is widely considered to have been a groundbreaking precursor to rap and hip-hop.

Mr. Leon stated, “Ever since I heard the name Melvin Van Peebles, I have equated it with excellence, beauty and courage. I am grateful to have this opportunity along with my creative team to introduce to some, and re-introduce to others, the richness of this unique musical experience.”

One of the most sought-after directors in the world, Tony Award-winner Kenny Leon’s Broadway credits include Children of A Lesser God, the 2014 revival of A Raisin in the Sun (Tony Award), The Mountaintop, Stick Fly, Fences, the 2004 revival of A Raisin in the Sun, Gem of the Ocean, Radio Golf, and Holler if You Hear Me. Leon recently directed the docudrama Amend for Netflix and is directing the upcoming Mahalia Jackson story for Lifetime. He is currently nominated for a 2020 Tony Award for his most recent Broadway work, A Soldier’s Play. He is Senior Resident of the Roundabout Theatre Company and is Artistic Director Emeritus of Kenny Leon’s True Colors Theatre Company in Atlanta, the nonprofit regional theater company he co-founded in 2002 to celebrate the rich traditions of Black storytelling while giving voice to bold new artists from all cultures.

Melvin Van Peebles is an American filmmaker, playwright, novelist, composer, and actor. He is most well-known for creating and starring in the groundbreaking film Sweet Sweetback’s Baadasssss Song, and also served as the film’s composer and editor. His first feature film was La Permission (1967), a romantic drama released in France in 1967 and in the United States (as The Story of a Three-Day Pass) the following year. Van Peebles made his Hollywood directorial debut with Watermelon Man (1970), a comedy about racial bigotry. He then turned to his pet project, Sweet Sweetback’s Baadasssss Song. Using mostly his own money and relying largely on nonprofessional actors and technicians, Van Peebles told the story of one black man’s battle against white authority and created a seminal work in American cinema. He then began a musical career with the album Brer Soul (1969), which featured a mostly spoken vocal style that prefigured rap. He subsequently moved into Broadway musical theatre, adapting some of his recorded songs for the production Ain’t Supposed to Die a Natural Death (1971) and one of his novels for Don’t Play Us Cheap! (1972; film 1973). Thereafter he continued to write, act, compose, and direct for films, television, and the stage.

Mario Van Peebles made his film debut in his father’s seminal Sweet Sweetback’s Baadasssss Song, but he burst onto the scene as a filmmaker in 1991 with his gangster classic hit New Jack City. Mario went on to direct and star in several groundbreaking films himself, including his multi-cultural western Posse in which he directed his father. He then collaborated with his father again on Panther, the first controversial award-winning feature on the Black Panther Party. Father and son produced Panther together, while Melvin wrote, and Mario directed. While playing Malcolm X in the feature Ali, Mohammed Ali a fan of Melvin’s, suggested Mario make a bio pick about his maverick father. Mario took up the challenge and wrote Baadasssss, an odyssey that chronicles the making of Melvin’s groundbreaking film Sweetback. Mario wrote, directed, produced, and starred in Baadasssss playing his father in the film. The feature was critically-acclaimed and became one of Roger Ebert’s 10 Best Movies of the Year in 1971. One of Hollywood’s most sought-after filmmakers/actors for over 30 years, Mario moves effortlessly back-and-forth between being in front and behind the camera. “I get bored if I’m just doing one thing to long” jokes Van Peebles. His numerous projects include We The Party, Roots, Armed, Salt N Pepa; and directing series like “Blood Line” and “Wu-Tang: An American Saga.”

Additional Ain’t Supposed to Die a Natural Death production details, including the complete cast and additional creative team, will be announced at a later date.

Suzanna BowlingApril 2, 2021
Read More
Scroll for more
Tap
Theatre News: Diana The Musical, The Musicals of Musicals (The Musical!), Thoughts of a Colored Man, Tina – The Tina Turner Musical: Original Cast Recording, Jamie deRoy and The Bistro Awards
What to Watch in The New Year: April 6