Among the marquee highlights of this event will be the rising of an extremely rare and mysterious full-size prototype Xenomorph costume (photo left) designed by the Academy Award-winning and revered surrealist artist and sculptor, H.R. Giger from the 1979 seminal sci-fi horror classic, Alien. 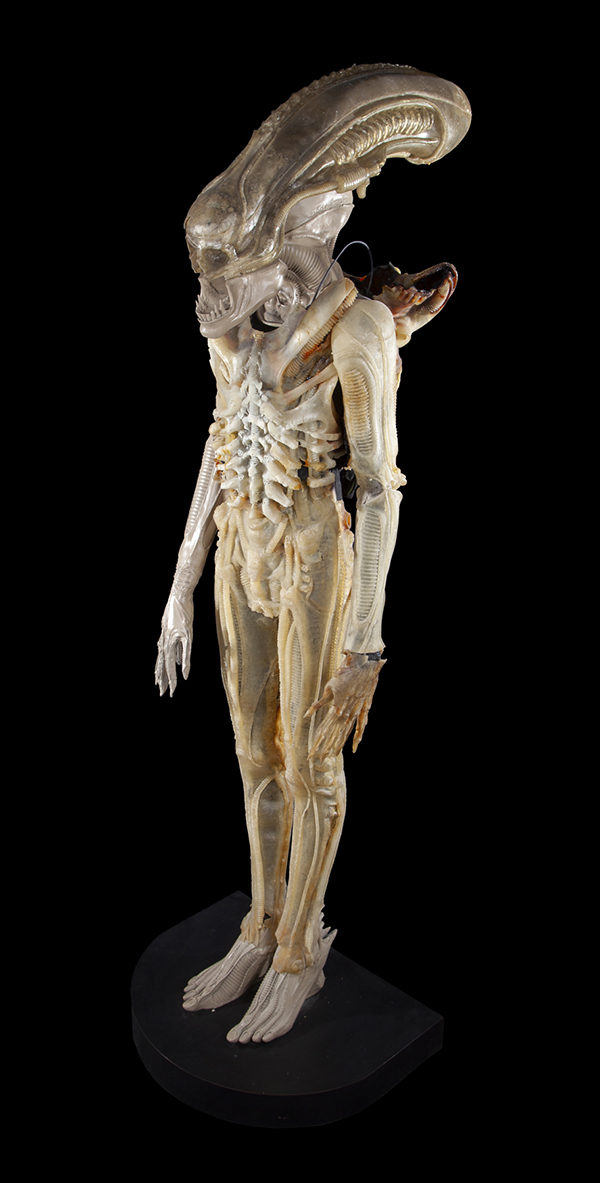 Long believed to have been lost and destroyed, this original translucent prototype (known as “Big Chap”) for the terrifying creature character was created for consideration by the film’s celebrated director Ridley Scott during the early stages of the film’s pre-production. Comprehensive lighting and camera tests were conducted by the pre-production team to demonstrate the potential; however, the non-translucent costume was the final result and the character development with Giger would go on to spawn one of Hollywood’s most legendary horror icons ever to come on screen. This extraordinary costume is now considered the rarest and most elusive artifact from the blockbuster film franchise and has a conservative estimate of $40,000 – $60,000.

“This rare and mysterious artifact from the Alien movie mythology is as much a piece of fine modern surrealist art, as it is a piece of Hollywood history” said Martin Nolan, Executive Director and CFO of Julien’s Auctions. “It is a miracle that H.R. Giger’s designed and sculpted Alien translucent costume prototype survived. Julien’s Auctions is honored to erect this legendary piece in a once-in-a-lifetime exhibition at our gallery in Beverly Hills for Alien and Giger fans and collectors before its sale at auction for the first time.” 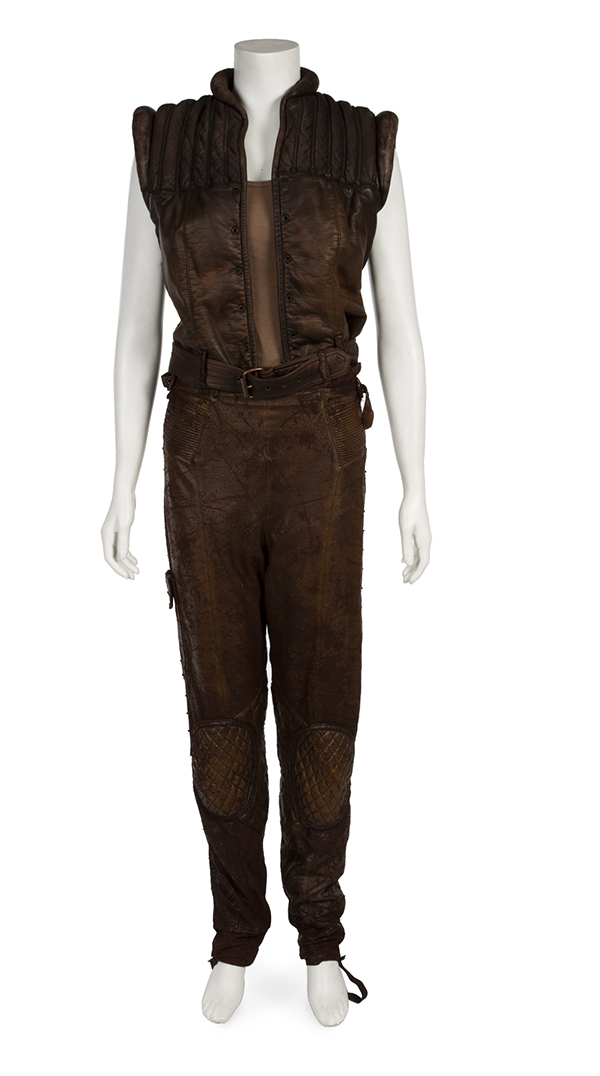 Other items from the Alien franchise include: a complete costume worn by Sigourney Weaver (photo right), as a clone of her legendary character Ripley in the film Alien Resurrection, as well as a costume worn by Winona Ryder from the movie. The films’ wardrobe (estimate each lot: $10,000 – $20,000) was designed by Academy Award winner Bob Ringwood and inspired by fashion iconoclast Jean Paul Gaultier. 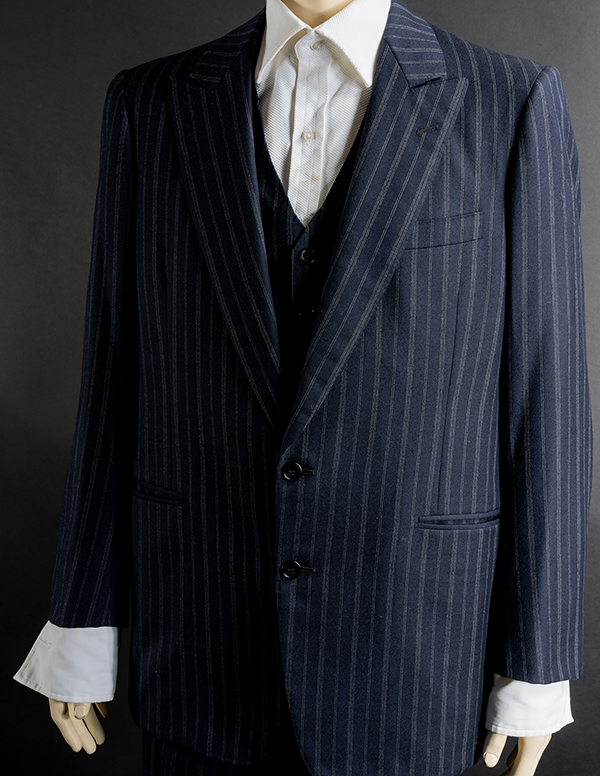 Another piece of celluloid history is a deep blue, original pinstripe gangster style threepiece suit, worn by six-time Academy Award-winning legend Al Pacino (photo left) as Miami drug lord Tony Montana in the memorable and climactic final act of Brian DePalma’s popular 1983 crime drama, Scarface. The suit is possibly the only remaining original Scarface pin-stripe gangster suit costume from the film’s climax in existence and can be screen-matched to the sequences wherein Tony Montana nose dives into a mountain of cocaine in the office of his fortress-like mansion.

One of the most controversial and notoriously received films at its time due to its depiction of drugs, profanity and violence, Scarface has experienced a resurgence and appreciation from film critics and viewers in the past recent years, whose status has gone from cult classic to one of the best crime genre films of all time. The movie is also revered among Hip Hop & Rap musicians, producers and record industry moguls who have spoken about the film’s impact and Tony Montana’s resilience and struggle for success as a testament to perseverance. This instantly recognizable and historic costume has an estimate of $60,000 – $80,000. 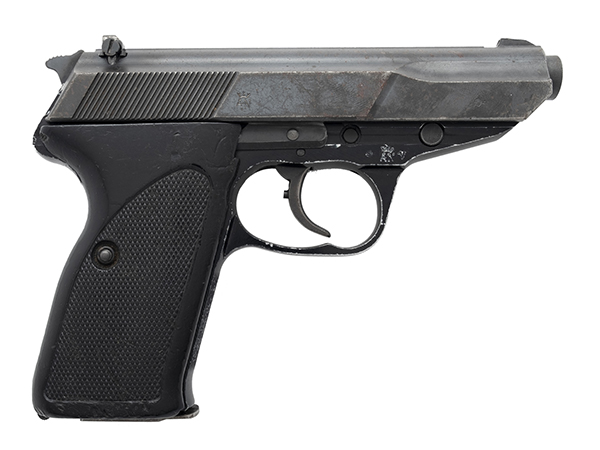 Following Julien’s historic sale of the Walther PP used by legendary actor Sean Connery as James Bond in the 1962 film debut of his most famous role in Dr. No this past December for $256,000, the auction house will be offering Connery’s hero Walther P5 from his last Bond film, 1983’s Never Say Never Again with a starting estimate of $80,000 – $100,000 (photo right). In one of the most renowned collection of Bond weapons brought to auction in years, the auction will also offer an M16 prop rifle used in the 1979 Bond film Moonraker; the hero .38 Smith and Wesson used by Pierce Brosnan in 2002’s Die Another Day and the very first Walther P99 used by the character in a James Bond film by Pierce Brosnan in 1997’s Tomorrow Never Dies. The estimate range of these lots are $10,000 – $60,000. 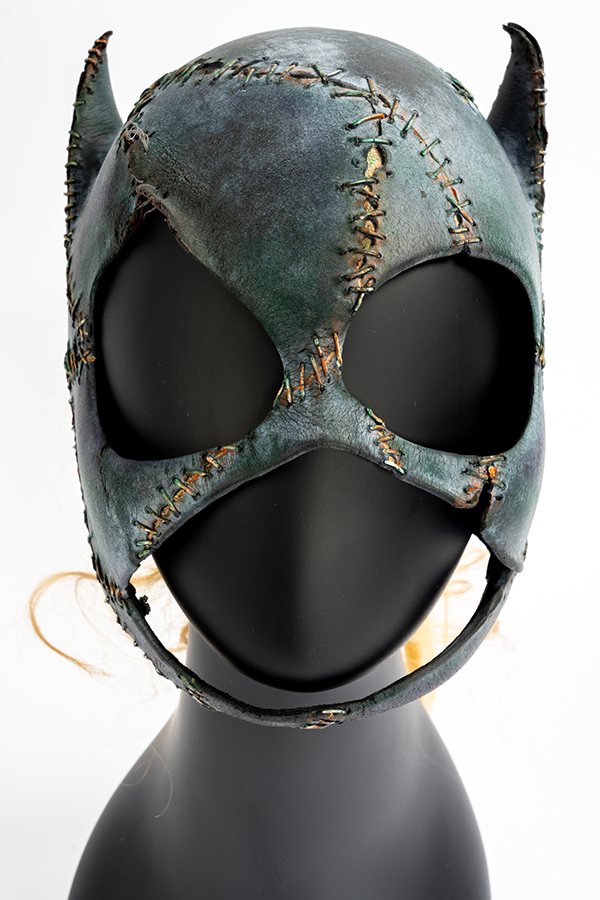 From the blockbuster Batman film franchise, comes an assortment of exemplary original pieces from the movies including screen-used production artifacts from the first four Batman movies: 1989’s Batman, 1992’s Batman Returns and 1997’s Batman Forever and Batman & Robin. Highlights with starting estimates include: a utility belt worn by Michael Keaton in Batman accompanied with a note on the film director Tim Burton’s stationary ($5,000 – $7,000); a cowl worn by George Clooney for his turn in the suit in Batman & Robin($10,000 – $20,000); an original cowl worn by Catwoman portrayed by Michelle Pfeiffer in the climactic final scenes of Batman Returns ($8,000 – $12,000) (photo left) as well as a massive light-up prop rifle brandished by Arnold Schwarzenegger as Mr. Freeze in Batman & Robin ($20,000 – $30,000). 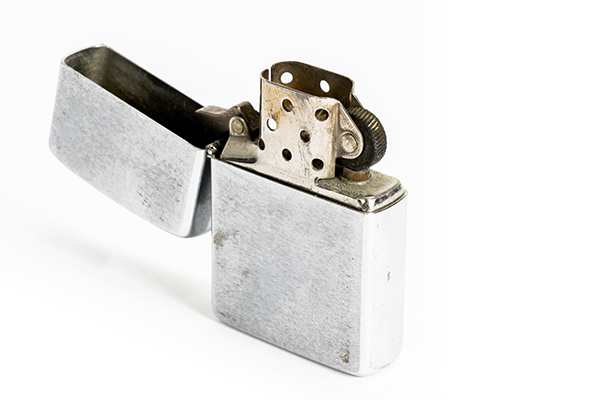 “Yippee ki-yay!” Die Hard, one of the biggest action movie franchises of all time which turned actor Bruce Willis into an international superstar in his role as New York police officer John McClane, returns with a vengeance in the sale of his iconic screenused Zippo lighter (photo right) famously used throughout the original film that started it all. The Zippo (estimate: $10,000 – $20,000) is accompanied by a letter from the Property Master stating that this is the only Zippo used throughout the 1988 film production. 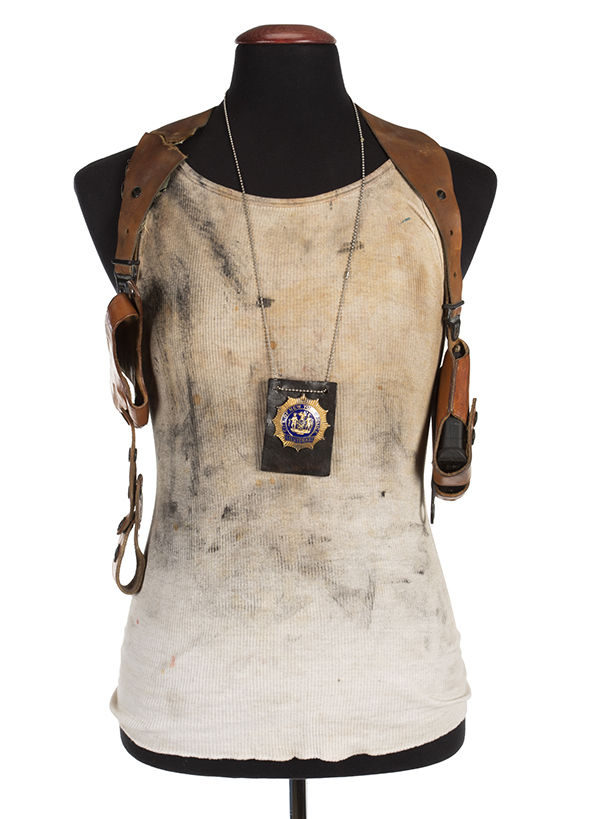 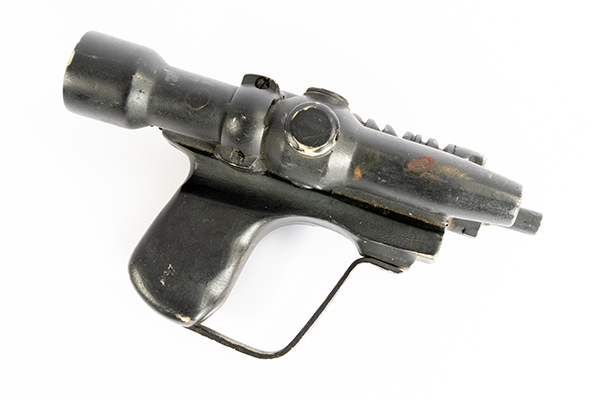 Props from another blockbuster film franchise that sky-rocketed the action spectacle genre as well as Will Smith’s career to box office superstar lands on the auction block with the appearance of Smith’s original complete full-length, U.S. Air Force fighter jet pilot flight suit in his role as Captain Steven “Eagle” Hiller in Independence Day. The authentic ID-4 flight suit (estimate: $20,000 – $30,000) boasts military style custom patches worn by the jet pilots seen in the epic 1996 sci-fi action picture, who attempt to take on a massive alien invasion force hellbent on the total obliteration of humankind.

In a galaxy, far, far away from the most iconic movie franchise of all comes an original Imperial Scout Trooper (“biker scout”) Blaster (estimate: $20,000 – $30,000) from the 1983 film Star Wars: Return of the Jedi hurtling toward the auction block with provenance from the film’s acclaimed Art Director, James Schoppe (photo above right). 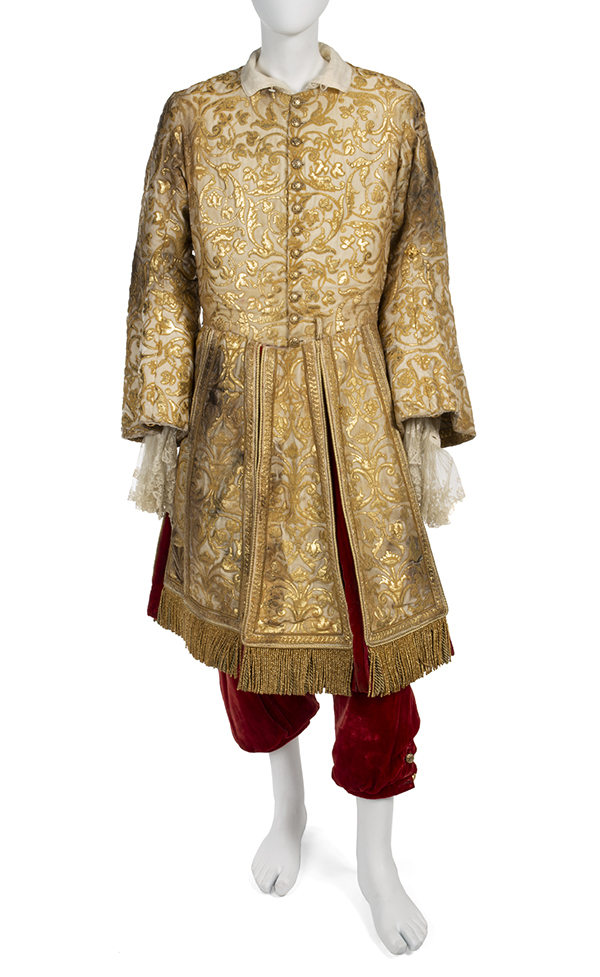 Also, from the Star Wars history books comes one of the most surprising new discoveries in recent years: the original costume illustrations by legendary designer, Bob Mackie, for the Star Wars Holiday Special. The 1978 television special was considered the most controversial Star Wars release of all time and was broadcast only once on television with the special still not made available today via streaming or DVD. For the first time ever, this collection of eight one of a kind original hand illustrated costume designs by the Emmy Award-winning designer, which has been held in Mackie’s personal archives for over 40 years, will be offered at auction.

Items from Hollywood’s most legendary leading men used in their most outstanding performances are up for consideration. The following are some of the stellar highlights (with starting estimates). Leonardo DiCaprio’s spectacular hand-tailored, period studio wardrobe worn by the Academy Award-winning actor in his role as King Louis XIV/Philippe in 1988’s The Man With The Iron Mask based on the classic Alexandre Dumas classic novel, makes a swashbuckling turn ($10,000 – $20,000) (photo left).

An authentic stunt bowie knife prop used by Hollywood superstar Brad Pitt in his memorable role as Lieutenant Aldo Raine in Quentin Tarantino’s 2009 film Inglourious Basterds in the climactic scene when Raine uses the knife ($5,000 – $7,000) to make a distinct mark on the nefarious German Colonel Hans Landa’s forehead (played by actor Christoph Waltz who won the Oscar for Best Supporting Actor for this role) is considered one of the most iconic prop knives in film history (photo right). 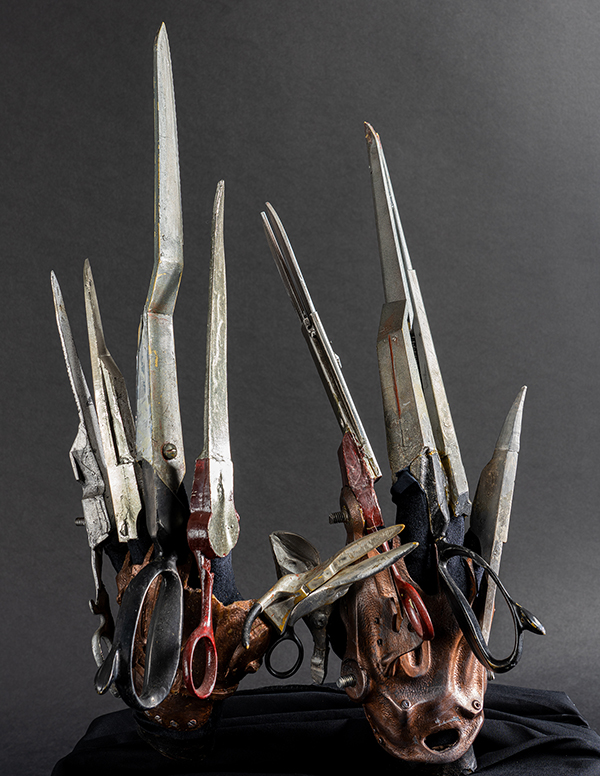 Another prop considered one of the most iconic relics in cinema is a pair of original, screen used “scissorhand” wardrobe glove props (photo left), worn by actor Johnny Depp in his early star marking role as Edward Scissorhands, Tim Burton’s 1990 horror, fantasy and romance cult classic. The prop ($30,000 – $50,000) was custom-designed at the legendary Stan Winston Studios, under the supervision of the brilliant, four-time Academy Award winner Stan Winston. Jim Carrey’s most versatile and acclaimed performances will be celebrated with the appearances of Carrey’s original screen used Hawaiian style shirt and striped pants film worn in his iconic role as pet detective Ace Ventura in 1995’s Ace Ventura: When Nature Calls($10,000 – $20,000), his oversized wooden mallet from 1994’s The Mask ($3,000 – $5,000), and an array of original production artifacts from Carrey’s acclaimed appearance as Batman’s nemesis, The Riddler, in 1995’s Batman Forever, including his iconic costume ($20,000 – $30,000), his skull canes ($20,000 – $30,000), and three of his “Bat Bombs” ($1,000 – $3,000). 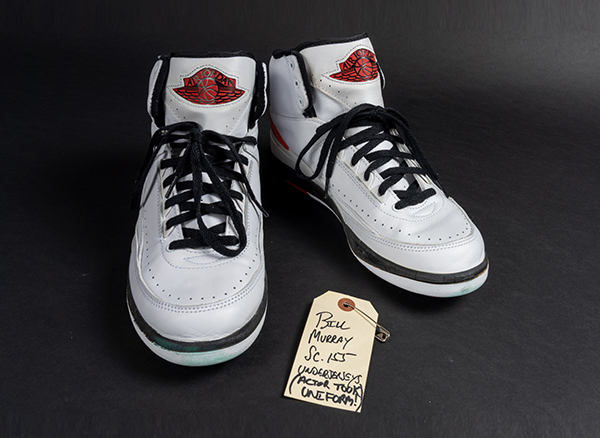 A piece of sports and live action/animated Hollywood history will score on the auction floor with the entrance of an original pair of Nike brand Air Jordan 2 sneakers worn by icon Bill Murray in the 1996 film Space Jam starring NBA legend Michael Jordan. The size 11 shoes (photo right) are depicted in the scene where Murray joins the final basketball game and makes the crucial pass to Jordan for the game-winning shot. The lot (estimate: $5,000 – $7,000) is accompanied by their original box and insert sheets as well as a pair of white socks and a red Acme Clothing brand Bugs Bunny and Tasmanian Devil T-shirt, worn by Murray beneath his basketball uniform. The T-shirt bears an original costume tag that reads “Bill Murray, Sc. 155, Underjerseys – (Actor Took Uniform!).” The highly anticipated sequel Space Jam: A New Legacy starring NBA superstar LeBron James with the return of Bugs Bunny and the Looney Tunes gang will be released this summer 2021. 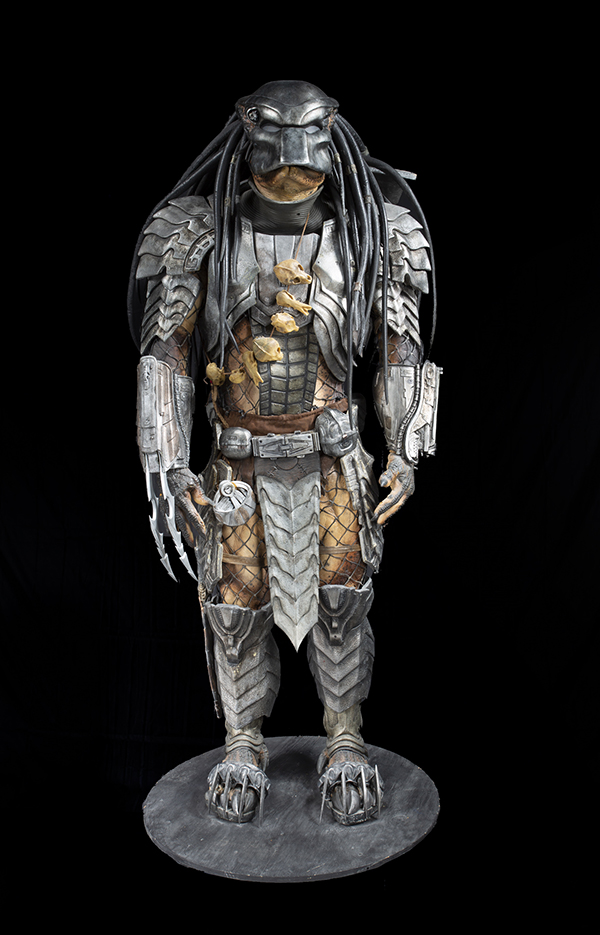 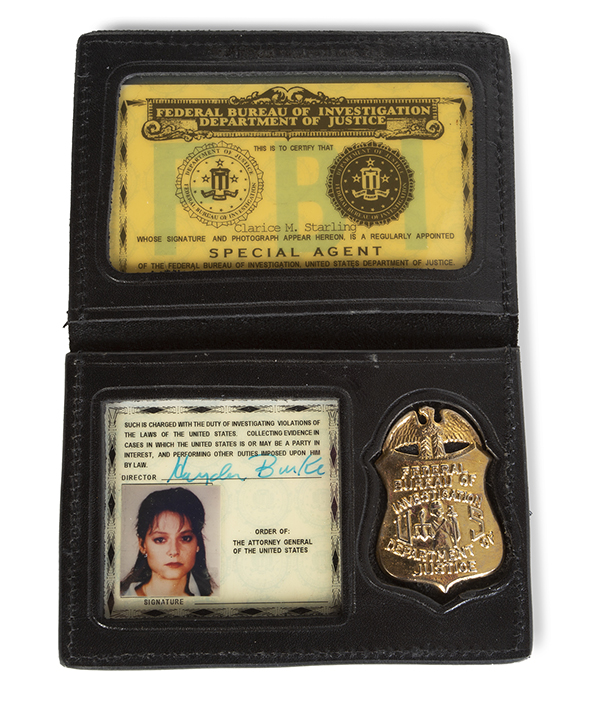 “Julien’s Auctions is proud to unveil the lineup of our annual Hollywood memorabilia event –our biggest one to date –comprising of the most coveted pop culture relics from the past half century,” said Darren Julien, CEO/President of Julien’s Auctions. “As Julien’s continues to consistently shatter Hollywood memorabilia, music and celebrity estate records at auction, we are positioned to expand and offer this tremendous selection of over 800 investment quality and museum exhibition worthy cinematic treasures from the popular genres of Science Fiction, Action, Fantasy, Adventure, and beyond.”

Fans and collectors will be able to peruse the history and provenance of these extraordinary items from their favorite films in Julien’s special limited-edition Hollywood Legends catalogues with four different catalogue covers specially designed for this exclusive event featuring Alien, Batman, Scarface and Edward Scissorhands.

The two-day auction kicks off with property related to glamourous movie stars from Hollywood’s Golden Era including Marilyn Monroe, Doris Day, and Greta Garbo up to the modern era. The auctions will take place on Wednesday, April 28th & Thursday, April 29th, 2021 at Julien’s Auctions in Beverly Hills and live online at juliensauctions.com.

G. H. HARDINGJanuary 9, 2023
Read More
Scroll for more
Tap
What to Watch in The New Year: April 21
The Glorious Corner